The recent, extreme winter weather in Texas has sent shivers down everyone’s spines as we’ve followed the power outages and their devastating consequences. Many fossil, nuclear, and renewable generators were offline during this period when energy was needed most, due to lack of winterized infrastructure. Events such as this one are predicted to occur more frequently due to climate change and will have massive human and economic impacts. While an analysis of what happened during the Texas cold snap event is still unfolding, it is already clear that some renewable generators suffered major financial losses based on their offtake structure (i.e. their contractual arrangements for power sales), and how that structure performed in extreme and volatile market conditions. Not generating power is of course generally bad for any project’s bottom line, but the financial impacts can be amplified for certain offtake structures common in ERCOT’s deregulated market.

How exactly is it possible for a project to lose tens of millions of dollars in the course of just a few days? Let’s look at a few scenarios for wind projects and explain how these financial impacts arise from the confluence of extreme market and weather conditions…

Financial hedges are among the most common offtake structures employed for renewable generators in ERCOT, and provide the generator (seller) a fixed price for a fixed quantity of electricity that must be delivered by a project at a specific settlement location and time. Typically for a wind project, for example, the fixed quantities are contractually delineated for each hour of the year, and are sized in the range of the “P99” production expectation for the project. The P99 production is expected to be met or exceeded on an annual basis 99% of the time, so the expectation is that it is unlikely a project would fail to produce the contracted quantities on average over the long term of the hedge (commonly 10-12 years for wind projects). Notably, however, forecasted production for any individual hour is significantly less certain than the average annual production—an important distinction with major financial implications.

Since wind projects are commonly located far from population centers where electricity demand is highest, hedges are typically settled at liquid energy trading hubs near those load centers. This means that in practice a multi-step transaction is executed each hour: a project sells its full electricity production into the real-time merchant electricity market at its point of interconnection; the project then buys a quantity of electricity at the settlement hub at the real-time hub price and finally sells it to the hedge counterparty at the fixed hedge price. And take note: the project is obligated to deliver the contracted hedge quantities regardless of whether it is actually generating electricity or not.

On the basis of that understanding, we can identify two key risks which played out for wind projects in Texas recently:

As we’ll see, schedule price risk hit wind projects with hedges especially hard because of the $9,000/MWh pricing cap (approximately 100 times higher than typical peak pricing) implemented by ERCOT in 2015 as an incentive for gas peaker plants to generate during periods of energy scarcity.

To illustrate how these hedge risks played out during the recent winter storm in Texas, we’ll look at a typical 100 MW wind project with a P50 production of 420 GWh/year, a P99 production of 350 GW/year, and a typical hourly generation profile. Our project is situated in west Texas and sells electricity under a hedge that settles at the ERCOT West Hub, with guaranteed hourly hedge quantities in line with annual P99 production levels, and a strike price of $20.10/MWh.  Let's start by looking at a baseline period in early February 2020, where we assume the project is generating per forecast, and evaluate the hedge performance using actual nodal and hub pricing (which stayed within typical ranges in this period). For a baseline seven-day period of February 1st-7th, we can see that the project’s net revenue remains positive ($187k in total) as it sells its generation at the nodal price at its point of interconnection, purchases the hedge quantities at the hub at the real-time price, and finally sells the hedge quantities to the hedge counterparty at the fixed hedge price.

Notice above that once the hub and nodal prices start increasing on February 10th, the nodal generation sales and cost to purchase hedge quantities at the hub both increase, while the hedge fixed revenue remains the same. In this example, the project is assumed to generate normally, such that the net revenue remains positive.

Now let’s examine what happens with the actual spike in market prices seen in February 2021. As demand increased (e.g. due to electric heating load) and various generators (including fossil, nuclear, and some renewable generators) were curtailed or otherwise unable to produce due to storm impacts, the electricity scarcity drove electricity pricing in ERCOT up to the $9,000/MWh market cap over prolonged periods. The figure below follows revenue for our 100 MW wind project during this period of pricing volatility during the winter storm. Overall, as long as the project maintains its normal annually forecasted generation (i.e. not impacted by the winter storm) and basis differential (the difference between real-time pricing at the hub and node) remains relatively low, the project experiences a net windfall, earning ~$12M during the period of February 13-19th! Not bad for a regular week of work…

But in reality, exceptionally cold temperatures, conditions causing icing on wind turbine blades, and other impacts caused some wind projects to curtail operations or shut down completely. The result is a perfect storm: the project is forced to buy electricity at the hub at exorbitant prices in order to settle its hedge obligations, but takes in zero nodal generation revenue to offset the cost. In the identical example using actual prices, the same project experiencing a full outage during this period would have lost ~$38M due to its commitment to deliver electricity under the hedge! A windfall just became a nightmare. 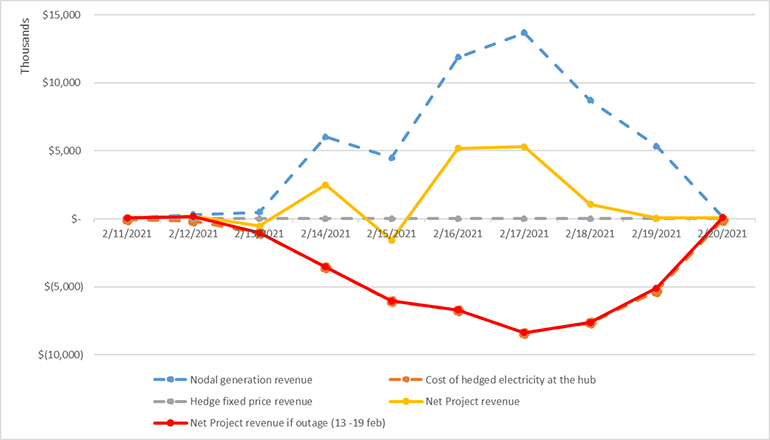 It’s easy to see, then, how quickly a project can lose millions on its hedge through the combination of extreme weather and scarcity electricity pricing driving excessive schedule price risk.

What about a proxy revenue swap?

A proxy revenue swap (PRS) contract is a less common offtake structure which aims to shift the risk of intermittent generation (e.g. based on variable wind conditions) for renewable projects away from the project and to the counterparty. Typically, a fixed quarterly payment to the project is sized based on all, or a portion, of the expected P50 (expected long-term average) generation of the project. This payment is reconciled against “proxy” revenue calculated by multiplying the electricity generation that should be produced by a wind project based on actual wind conditions (“proxy generation”) times the market price at the settlement point. Like a hedge, the project bears “basis” risk to the settlement point, which is typically a liquid energy trading hub. However, unlike a hedge the project is not obligated to deliver a pre-ordained quantity of electricity in any given hour, independent of actual wind conditions, but is only expected to operate at a typical level of operational efficiency defined in the PRS contract. So, would this structure have saved our 100 MW wind project in west Texas from the same fate as shown above?

Proxy generation is calculated based on the actual, measured wind speeds at the Project, which are used to determine theoretical power that should be generated by the project. Normally, this would be very close to the actual generation. The Project receives a fixed revenue stream, so while it gives up the upside revenue in a settlement period that is windier than expected, it is insulated from the downside losses of a settlement period with low wind.

However, if the Project is unable to produce power due to turbine icing, ambient temperatures below (or above) operating range, grid curtailment, or other issues not allowed per the PRS contract, proxy generation could be significantly higher than actual generation. Combined with high market electricity pricing as discussed above, this scenario exposes the project to similar risks as those under the hedge, albeit financially settled in a different manner. The Project must pay the difference between the extremely high proxy revenue and the fixed quarterly payment (based on typical generation and pricing conditions) at the same time that it is unable to generate and earn nodal generation revenue to offset the PRS cost.

To illustrate this, consider the identical project as studied in our hedge scenario, but contracted under a PRS for 80% of its P50 expected generation, modeled using the actual wind speeds experienced in west Texas during the February 13-19th time period. 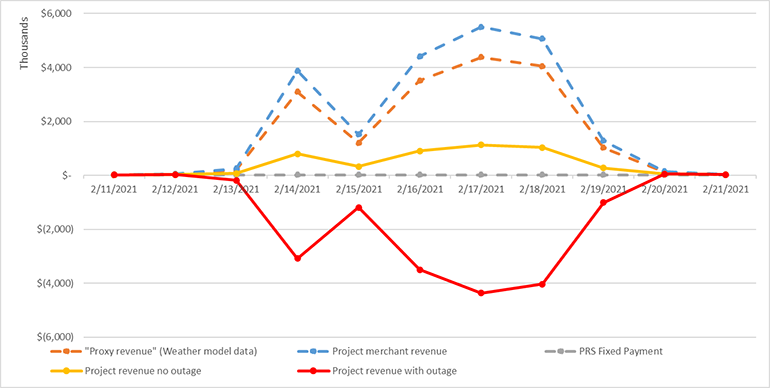 emptyIn this scenario, while the project fares well and is insulated from the impact of scarcity pricing to the extent it continues generating normally (and basis differential remains low), a project outage during the February 13-19th time period results in massive financial losses (~$17M)—as a result of the loss of generation being attributable to extreme weather rather than low wind speeds.

The need to provide stable cash flows to facilitate tax equity financing, coupled with a scarcity of traditional busbar power purchase agreements, has long been a significant driver for projects to pursue hedges, proxy revenue swaps, and other such offtake structures in ERCOT. The recent, dramatic events in Texas, however, have demonstrated that the theoretical risks that ensue from extreme weather events and scarcity pricing can be catastrophic to project cash flows if the projects are not able to generate… and are perhaps not so theoretical after all.