In our previous blog post we proudly announced the launch of our work with the Open Data Institute (ODI) working on a research activity that will feed into the wider programme the team is carrying out on the long-term sustainability, and infrastructure, of data institutions and data access initiatives.

In addition to our role as a key strategic advisor within the Energy Transition space, DNV is also operating as a data institution through its Veracity open industry data platform and we’ve been exploring the role a trusted, independent third party could play to support the creation, curation and sharing of data assets associated with Carbon Capture and Storage (CCS) projects.

Such examples include – but are not limited to;

Since our announcement at the start of August we’ve spent our time exploring the opportunities that trusted data institutions such as DNV could leverage in support of investment, initiation, execution and operation of CCS projects, interviewing key personnel involved in the development of CCS in the United Kingdom and beyond.

Transforming the oil and gas industry
It’s an exciting time at DNV with the recent publication of the 2020 edition of our annual Energy Transition Outlook (ETO).

The ETO forecasts that hydrogen (H2) and carbon capture and storage (CCS) will be a catalyst for deep decarbonization after 2035, removing carbon from natural gas – before or after combustion – to reach hard-to-abate sectors. This could transform the oil and gas industry into the decarbonizer of hydrocarbons and the world’s supplier of carbon capture and storage. It could transform the sector so that it is an essential contributor to realizing climate ambitions, rather than to missing them.

The ETO continues by describing the challenge in more detail; namely that the problem that CCS won’t move down the cost learning curve unless the industry significantly increases its roll-out of the technology- this is not foreseen to happen until the costs have come down or a carbon price exceeds the cost of the technology. The ETO describes how hydrogen faces a similar issue. It relies on CCS for blue hydrogen, and on the cost of electrolyzers falling to produce green hydrogen at scale. The narrative states that both will happen in order to realize the hydrogen economy, although not until the 2040s.

The ETO describes how forming partnerships among government, industry, and associations will be crucial in scaling innovation and technologies for decarbonization. Working together to make hydrogen and CCS safe, effective, and commercially viable will give the oil and gas industry the certainty it needs to manage new risks and accelerate its transformation towards a low-carbon future.

The role of a trusted third-party data institution
We kicked off our project in August 2020 and initiated our research by seeking to understand the value of data to stakeholders in the CCS space today, gauging their opinion on the concepts shared earlier.

We presented our concept to trade associations, private sector organisations, and industrial partnerships and explored how data is consumed by key CCS actors today. We discussed challenges around data availability alongside the opportunities and benefits wider data sharing within this developing industry could deliver. We presented how such benefits could be realised via the likes of DNV stewarding CCS data, obtaining feedback on our concept.

Our key findings to date are:

A systems-based approach
What has been reasonably evident as a result of our research is that a systems-wide approach to mapping, modelling and implementing the facilitation of data sharing between actors in a new industry – one that does not yet have an operational facility within the United Kingdom – is a potentially vital strategic concept and one that will continue to be explored and detailed as we progress our activity.

It’s also important to note that different data access models will be reviewed as we progress, mindful of the sensitivity around the types of data likely to emerge from CCS projects as they develop. We expect to recommend a mix of different models – completely open; anonymised; privatised; curated; community or membership-based -which fit multiple use cases as more organisations look deeper into the underlying CCS technology and business models.

Mapping a data ecosystem
Using the ODI’s methodology for mapping data ecosystems, we have taken the key themes and valuable input and feedback that is highlighted above and have attempted to show how a trusted third party data institution could play a vital role in the development of the emerging CCS industrial landscape. 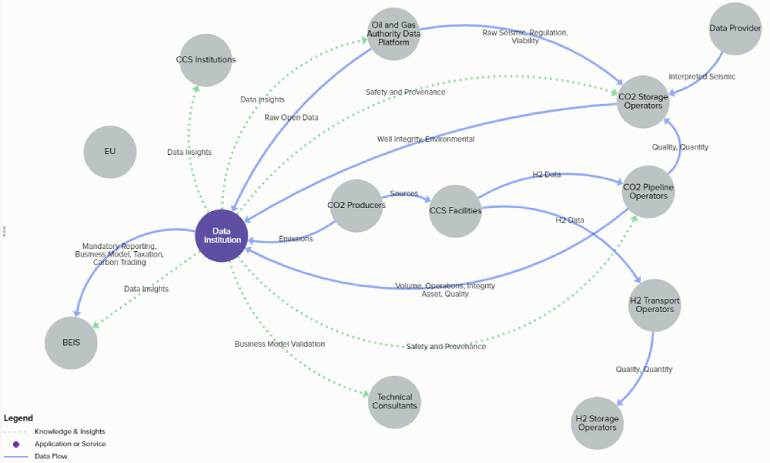 It’s important to note that core elements and links between CCS, CO2 and Hydrogen (H2) have not yet been fully mapped out in the above and are shown simplistically. As scaled production of blue hydrogen relies on use of CCS – and the attraction of blue hydrogen increases as CCS is deployed at scale – we’d expect the underlying value creation resulting from sharing data between specific H2 actors to develop further. We will revisit this in a future article.

Breaking data siloes that exist between organisations may well be needed to foster collaboration on CCS projects; and using that as a premise, it is reasonable to expect that digital leaders in those organisations will drive further expectation around how data would be shared at a logical level; potentially driving discussion around open and connected technologies that communicate through application programming interfaces (APIs) and agreed data standards.

Next steps
Many shared the opinion that a mandate to share data must come from Government and associated policy making units. In addition, many were keen to highlight the potential sensitivities around commercial technologies, particularly balancing this view alongside the need to drive forward data sharing to support change and growth. This potentially wrestles with the more conservative approach to data sharing that has existed within the oil and gas industry for many years.

We will explore these thoughts, concepts and themes as we head into the tail-end of 2020 and through to next year.

We’d value your feedback, thoughts and opinion and would love to speak to you if you have thoughts or ideas as to how data can help shape your current, future or conceptual CCS initiative.

The outlook for the oil and gas industry in 2020

What do we mean by data institutions?