How can curtailed wind energy be used to produce hydrogen?

The UK government has set an ambitious target to install 50 GW of offshore wind by 2030. With just over 10 GW of installed offshore wind capacity, there is much more development required to meet this target. However, some of the challenges that this ambition poses for the UK’s national power infrastructure have already become apparent. The majority of the UK’s offshore wind resource is found in Scottish and Welsh waters. The historical development of the power distribution system in these areas means there is limited capacity to export this power to meet wider demand across the UK. For example, in 2020, 3.6 TWh (11 million homes annual usage) of UK wind power was curtailed (restricted) due to network constraints.

The challenge faced in the UK is how can this loss of renewable energy be avoided? One answer being considered is to take the electrical generation from the wind farm that would have been wasted and instead convert water into hydrogen and oxygen via electrolysis. 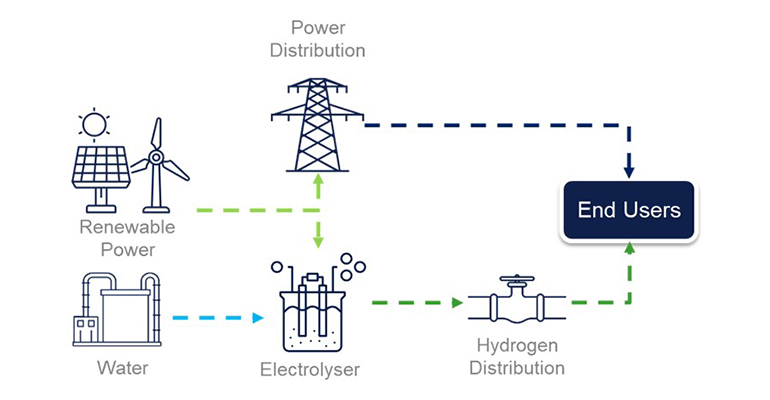 The conversion of power to hydrogen (also known as Power-to-X) provides benefits in that hydrogen gas can be stored over longer periods and transported via pipelines at lower costs. The downside to this process is the conversion to hydrogen leads to an energy loss of around 40% and the conversion back to power through hydrogen fired turbines leads to a total energy loss of 77%. However, hydrogen can be used across multiple applications for decarbonization other than purely as an electrical energy store, including space heating, transport, industrial heat, and replacement of current hydrogen feedstocks.

Hydrogen generated via curtailed wind energy suffers from variable generation coupled with large peaks due to renewable sources being based in similar regions. The provision of a steady hydrogen supply proves challenging with many turning to traditional storage methods for gases (compression, line pack, geological stores). The storage of hydrogen brings higher costs with lower total energy stored due to its lower density than natural gas. Connecting the electrolyser to the power grid to generate hydrogen when required could provide an alternative solution. In this scenario, the cost of power is dictated by the power grid. Coupling this with the CO2 emissions associated with grid power increases the likelihood of un-economical hydrogen production costs.

One potential option is the conversion of the hydrogen to further low carbon fuels. The benefit of bulk liquid fuels is their ability to be stored at relatively low costs to manage supply and demand variation. The conversion to ammonia requires the combination of hydrogen with nitrogen via the Haber-Bosch process. This nitrogen can be taken from the air producing a low carbon product that can be used as a replacement for current ammonia usage in fertilizer production. Net zero synthetic fuels require a negative source of carbon via biomass energy carbon capture (BECC) or direct air capture (DAC) to build hydrocarbon chains using the Fischer-Tropsch process. They can be used for blending or as a direct replacement of current hydrocarbon-based fuels.

The supply of hydrogen needs to be balanced with the demand growth for alternative low carbon fuels and the financial implications that come with this. DNV’s annual Energy Transition Outlook considers the European demand growth for hydrogen across different industrial sectors based on current global commitments. 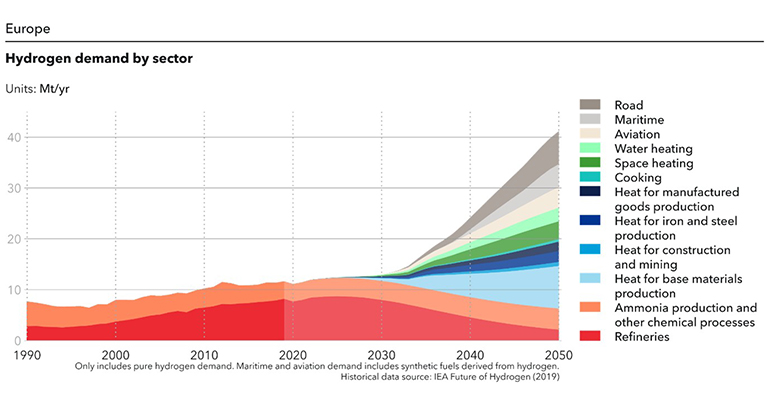 The demand rates for hydrogen in different sectors reflect the supply chain constraints and technology development timelines coupled with rotation of current assets. Fifty percent of green hydrogen’s cost is based on power prices but is also linked to uptime or equipment usage. Curtailed wind resources will require a flexible plant that can vary its production rates while carrying the costs for lower utilization. To encourage movement away from traditional fuels, financial incentives for both the supplier and customer are required to overcome initial economic barriers. The UK government is currently considering a combination of legal targets, carbon taxes and government business support mechanisms to drive this ambition.

The UK’s target for growth in its offshore wind generation coupled with geographical and network constraints provides an opportunity to capture and utilize wasted or curtailed renewable power when demand is low. Power-to-X provides opportunities to convert this energy to low carbon fuels and products that can be used domestically or exported to global markets for decarbonization of existing and future markets. Unlocking this potential will require a greater appreciation for the challenges in coupling hydrogen supply to demand and the financial incentives or support required to grow this emerging market.