At 97 years old, Goodenough is still working on Li-ion batteries. 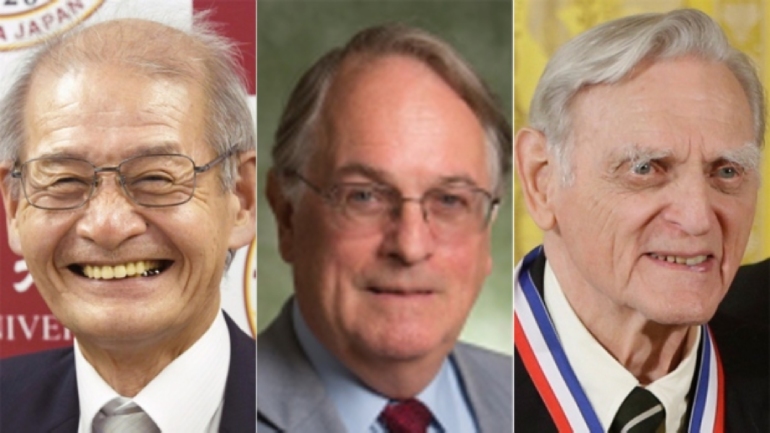 John B. Goodenough, professor at UT Austin, jointly with Stanley Whittingham at SUNY Binghamton and  Akira Yoshino of Meijo University have won the 2019 Nobel prize for the invention of the Li-ion battery.

Your phone, your tablet, your portable Bluetooth speaker, the portable drill in your garage, and now your car and the entire electric grid all owe these gentlemen a moment of thanks.

Every industry has heroes. There are industries all over the world that contribute to global gross domestic product, and within each of those industries, there are a few individuals who have achieved technical (and sometimes commercial) greatness. Few, however, get the Nobel Prize.

In grad school I used to attend the materials conferences MS&T and TMS. I was only just then starting to work in energy and batteries. It was MS&T where I first met Imre Gyuk. I first met Ali Nourai at an IEEE meeting, before he and I became colleagues at DNV after the KEMA acquisition. In 2012, I joined the NAATBatt board and I first met John Goodenough at the 2013 Annual Meeting in Austin Texas, where we presented John with a Lifetime Achievement Award. At that time, he was 91 years old and still captivated the audience with this work on Li-ion batteries.

At the 2018 NAATBatt annual meeting in San Antonio—the year after I relinquished my Chairman seat— we gave John Goodenough the Pioneer Medal. Bob Gaylen, CTO of CATL and Chairman of NAATBatt at the time, hung the medal on John. After the award, Bob and I caught up with John while he told us funny stories. I recall thinking at the time “none of us here would have a career without the work of this man.”

Stan Wittingham and I both ran for NAATBatt CTO in 2018. Stan won, and for good reason. I had no place running for that seat. I hold 1 patent, while Stan holds dozens. I didn’t invent the Li-ion battery. Stan did. Stan is a very modest guy. He and I also serve together on the NY-BEST board. Sometimes I have to ask myself: “how in the heck did I get so lucky?” I’m walking around with all of these super smart people who helped make the world what it is. Stan’s a friendly guy and if you had no understanding of this industry, you’d never know you were standing in the presence of a world-changer.  This industry has its own turnover, and some people stay while others go. But people like Goodenough and Wittingham keep at it. An industry is a group of people who work in generally the same field, and their collective effort and body of work produces a collective memory. Some of those memories are short and they fade, others are formative, made when the industry was young, like a child’s memories between the ages of 3 and 5 years old. These memories make a child who they are. Goodenough, Wittingham, and Yoshino made this industry what it is.

At 97 years old, Goodenough is still working on Li-ion batteries. Some day when we have a solid state Li-ion battery that resists thermal runaway and has 400 Wh/kg, you’ll be able to reach back to the work of John Goodenough and credit him for that too. And in another generation when Mars missions are commonplace, and the rovers and satellites can sustain hours in the shadow of moons or planets without the sunlight to recharge them, you’ll be able to thank the work of Goodenough, Wittingham, and Yoshino.  And in two generations when batteries are so energy dense we can fly on electric aircraft for long distances, people will think we were archaic and crazy for ever getting our energy from oil. We’ll be able to credit these Nobel Prize winners for that too. Thank you John Goodenough, Stan Wittingham, and Akira Yoshino for all of your work, for what you’ve done for us and our children.