This blog was originally posted in 2018, and is being re-posted as part of our classics series

This blog was originally posted in 2018, and is being re-posted as part of our classics series. A lot has changed in the electric off-road space since then. At the time of the original post,, Rivian had not unveiled their project publicly, there was no Extreme E event, the Ford Lightning was not even being considered as a product, the Cybertruck fiasco was yet to occur, and no one would have predicted that GM would re-brand the Hummer as an EV flagship. In re-reading, most predictions are coming to fruition, especially the on-board kitchen for which Rivian is getting so much press. (though it’s not in the tailgate as predicted below…)

In 2013, I published a blog about electric vehicles from the motorhead perspective. Four years later, nearly ever supercar brand uses a hybrid or full-electric as its halo car, electric cars have broken 0-60 marks that were never dreamed of by production cars, and a few electric or hybrid cars are hitting quarter mile times faster than any of the modified race cars in the original The Fast and the Furious movie.

In 2017, electric cars already account for 1 out of every 100 registered cars in California,, and it is predicted that EVs will be account for half of cars sold in the United States by 2030. However, the one major category that lacks a representative performance electric is the off-road focused truck. My prediction is that by 2025 the Ford Raptor, a truck I have dreamed about owning since its inception, will either be hybrid, full-electric, or dead.

Any off-road enthusiast knows that high torque at low speeds is the goal. Whether you’re rock crawling in Moab, slinging mud on the Trans America Trail, or beached at Pismo, torque helps you get out of tricky situations and have fun doing it. Instant torque at any speed is a key feature of electric performance cars which has been touted again and again. Electric trucks will be able to do things today’s off-road community can only dream of.

Perfectly tune-able torque and power at each wheel at any moment? Yes, please! Electric vehicle manufacturers and custom tuners alike have been implementing four-wheel-drive and all-wheel-drive via multiple motors placed at each axel or each wheel. In the case of the now infamous Tesla Model X P100D, the D stands for dual engines with one powering each axel. The Rimac Concept One and the Mercedes SLS e-Type are two examples of a growing trend of mounting an electric motor at every wheel. This enables extremely accurate all-wheel-drive without the need for the heavy and complicated differentials we see on traditional off-road rigs.

When an engine fails, an internal combustion vehicle needs a tow truck. These come at a hefty price when you’re in the middle of nowhere. When an EV with an engine at each motor fails, there are three backup engines to rely on.

More Lift For Your Buck

Lift kits are essential to any real off-road vehicle. Besides helping trucks get over seemingly-impassable parts of the earth, lifting a truck helps protect critical parts of the machines. Since electric vehicles don’t require most of the components of their internal combustion counterparts, there is a lot less need for that protection. Some parts located in the undercarriage that strand off-roaders in conventional off-road trucks but aren’t even needed on EVs include: exhaust, transmission under the car, differential, oil drain pan, and power steering systems.

Water fording might be the coolest part of off-roading. When coming face-to-face with a seemingly impassable creek, stream, or river, a traditional car must turn back, while a solid off-road rig can drive right through. The main thing to watch out for when driving through deep water is usually the engine intake located in the grille of the car. Once the water level reaches the intake, the engine can flood, leaving your car permanently bricked. To get around this, the most awesome off-road rigs will add a snorkel located near the roof of the vehicle so that the truck can ford through water much deeper than the grill. 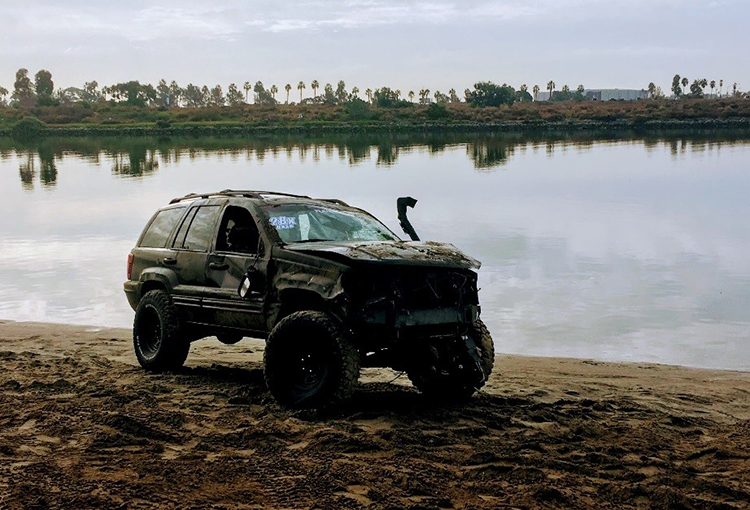 Electric Vehicles do not have intakes, and famously Tesla ditched the grill a few years ago. With the right kind of waterproofing and anti-buoyancy, it’s possible to imagine an electric truck which can drive under a river or lake.

The 200 kWh Tesla Roadster concept unveiled earlier this year will have a range of 600 miles, which is longer than any full-size SUV currently available on the market. But there’s more than that available for off-roaders. They don’t typically build fueling stations in the middle of nowhere. Imagine a world where solar-powered super chargers are dropped by helicopters in the middle of the desert. Zero emissions electric fueling stations can be powered by solar panels and be 500 miles from the nearest road, providing endless fuel and emergency power at locations that couldn’t even fathom petrol as an option. 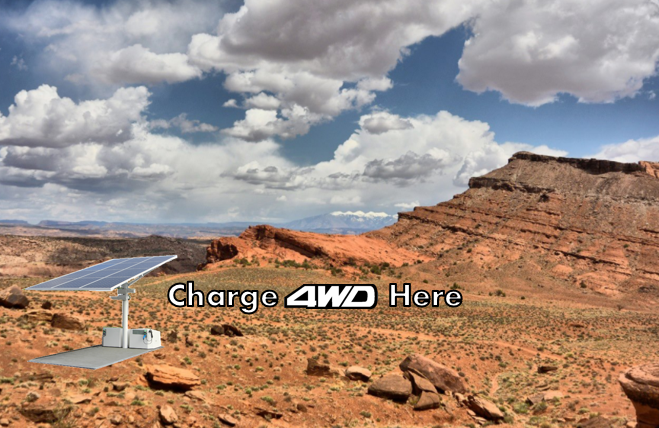 The Pikes Peak Hill Climb in Colorado is one of the pre-eminent tests of hill climbing prowess in the United States. Rally cars and dirtbikes from around the world come to Colorado Springs to show their skills. Electric bikes have been performing so well, they’ve created their own category. In 2013 an electric motorcycle was the fastest bike up the hill, and e-motorcycles are consistently placing in the top ten year over year.

Cooler in the Frunk, Party in the Back

The Honda Ridgeline famously stuck a full-size trunk with a room for a cooler under the bed of their pickup truck, a standard they have maintained for their recent major redesign. Honda did this by moving the gas tank and designing a new frame to make some more room.

Any electric truck will have plenty of room where the engine would normally go, and anyone who spends time camping in the desert knows that cooked meals and cold beers are part of the fun of a weekend away. I’ll bet a cooler full of beer that the first off-road focused electric truck will make room for a cooler in the front trunk, or “frunk.”

Meanwhile, recent advances in induction cooktops provide a great opportunity for installing cooktops integrated into the truck. This could happen anywhere, but it’s my hope that the induction ranges are integrated into the tailgate. At a peak capacity of around 1,800 W per cooktop, an hour of hardcore cooking on four ranges would only use 3.6% of the proposed 200 kWh battery capacity. Sounds like a great way to tailgate!

These are just a few of the benefits we can expect from the future of off-roading. So, if you like spending your weekends in the great outdoors with a 4-wheels spinning under your feet, you should be excited about the potential for electric trucks. And if you’re a manufacturer who happens to be reading this, make this thing, please!

Historic EV and infrastructure plan fresh off the President’s desk

Three lessons the U.S. (and Will Ferrell) can learn from the Norwegian EV experience

Listen to the podcast