Recently I met over 100 engineers during two of our offshore wind seminars in Asia.

Although Europe is leading the offshore wind development (with a record-breaking 25% increase of 3.1GW over 2017), the focus on offshore wind is definitely growing in the rest of the world too. It is great to see that the interest in this field keeps increasing around the world. In DNV, we try to do our best to contribute to these developments wherever we can. It was therefore great to hear the positive feedback on our offshore wind workflows in Sesam and Bladed.

During recent years, Sesam and Bladed have been developed to become a well-integrated pair of software tools from DNV. Although Sesam and Bladed are well-integrated today, they come from completely different backgrounds. Until a few years ago, Bladed (the industry practice software package for the design of onshore and offshore wind turbines) was part of GL Garrad Hassan, while Sesam (a world-leading software suite for strength assessment and sea-keeping analysis of offshore structures) was part of DNV. After the merger of DNV and GL in 2013, a lot of effort has been put into making the two programs talk to each other for offshore wind. It’s a perfect combination really, considering the major role each software plays in its respective market. The combination of their capabilities therefore makes a lot of sense, and makes a perfect fit for the offshore wind industry.

When we talk to customers, we often hear that exchanging data between different programs can be a time-consuming and error-prone task. This was therefore one of the first focus areas that we worked on when we started to interface Sesam and Bladed a few years ago. Initially, loads were transferred from Bladed to Sesam, allowing for structural analysis and/or post-processing for fatigue limit state analysis (FLS) and ultimate limit state analysis (ULS) of offshore wind support structures in Sesam using wind turbine calculations from Bladed. Next up was transferring the model from Sesam to Bladed. 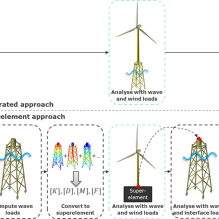 The mass was relatively simple to check once the structure was correctly transferred, while the natural frequencies already required some further checks. For example, for the superelement it is important to check that it gives the same dynamic response as the original model, because otherwise using a superelement would not be valid. In order to simplify this process, Sesam provides functionalities to check this convergence between the two models. Once the superelement was converged, the natural frequencies were matched with the original model in Sesam and the full support structure model in Bladed.

Adding a wind turbine into the mix

Initially, we looked into time domain runs with a parked wind turbine, and after that also with an active wind turbine. To make a long story short, after running analyses, comparing results and making some further adjustments in aligning input, all analysis types and models gave near-identical results. Needless to say that we were quite satisfied with this result. And because we transferred the Sesam model into Bladed for both an integrated and superelement workflow, this meant that we could not just compare Sesam and Bladed, but also the two workflows. 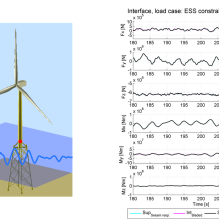 An example plot from the verification study, showing comparison of interface load for an extreme load case. It can be seen that the results for the integrated and superelement methods are near-identical.

So which method is best?

… might be the question that you are asking yourself now. After all, the two workflows are quite different. And, will they give the same results?

To answer the last question first: yes, they do, but more on that later.

Getting back to the first question: which workflow is best? Or perhaps more appropriately: which workflow should I use? It is not uncommon that this question is asked, and the answer might be an anti-climax: it depends. Both methods have their own strengths, and both methods have some reasons why it should or should not be used in certain cases.

The main benefits of the integrated design approach are that the analysis is performed on the complete structure in one go. This also means that hydro-elastic coupling effects on wave loads due to structural deformations are taken into account during the analysis in Bladed. However, the support structure is limited to a beam model.

The main reason why the superelement approach is currently the industry standard, is that it allows for a clear split between the parties involved (being foundation designer and wind turbine manufacturer). The responsibility of each party is clear (foundation versus wind turbine) and the intellectual property (IP) rights also remain separated. At this point, it is worth noting though that Bladed is able to encrypt data, which means that the IP rights issues can be overcome by making use of that (which would allow using the integrated design method after all). One example why some companies that own both Bladed and Sesam are still choosing for the superelement approach though, is that the superelement approach allows for more complex modelling features in the structure in Sesam, such as shell models.

So, choosing a method depends on different factors and the parties involved in your project. The good thing is that both methods give similar results.

This brings us back to the answer to the other question above: both methods give the same results.

By automating the data conversion between Bladed and Sesam, transferring models, loads and results should be straightforward for the users. As mentioned in the introduction, to manually convert (and verify) that data from one system is entered correctly into another system can take a significant amount of time, and it is prone to errors. By removing that burden we hope to allow users of Sesam and Bladed to not have to worry about the data exchange.

However, given that the exchange is automated, we of course have to make sure that the conversions are done correctly. To prove that the conversions are done correctly, a verification report of this was made during the implementation of the interfaces between Sesam and Bladed. The verification report shows that the two methods give near-identical results (as long as the input settings are the same, which should be an obvious statement, but always worth repeating). 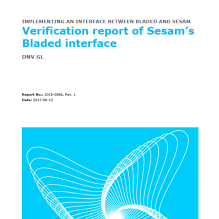 One important aspect of the verification study was to find out which assumptions are made in each program, how structural properties are being applied and used, how calculations are being performed, etc. I guess you can imagine that, even though the assumptions are known for each program, it takes time to compare these and to investigate if and how something influences the results. Although time-consuming, we strongly believe that it was a worthwhile exercise, even more so because by writing everything down we now have a clear overview of the different assumptions in each program and how data should be transferred.

Some time ago, we held an offshore wind webinar discussing the interfaces between Sesam and Bladed in more detail. If you’re interested in this topic, I recommend having a look at it! You can find it here.

Feel free to contact us if you would like to know more about what Sesam and Bladed can do for you.