Article 8 of the EU Energy Efficiency Directive 2012/27/EU requires all ‘large’ companies to carry out energy audits every four years, and in many countries the next deadline is 5 December 2019. So with EXACTLY one year to go, here are 13 common mistaken beliefs that could land you with fines and reputational damage, or cause you to miss opportunities.

1. I am not an energy-intensive company

Past energy efficiency legislation targeted only big energy consumers, but Article 8 applies to a wider range of companies. If you have at least 250 employees, or an annual turnover exceeding EUR 50 million and an annual balance sheet exceeding EUR 43 million (some countries have different thresholds, just to keep you on your toes), you have to do an energy audit.

2. I am only a small legal entity

You might be a small legal entity, but maybe you belong to a larger group? In that case, you need to consolidate your employee and financial data with the other legal entities in your group, and together you may exceed the thresholds.

3. Even when consolidating my data nationally, I don’t reach the non-SME thresholds

You might be off the hook in certain countries, but many Member States require worldwide consolidation, so maybe check your total calculati

4. I am definitely an SME

If your company is an SME, the EU only encourages you to do an energy audit. But some Member States are broadening the scope of Article 8 to include energy-intensive companies, even if they are small. So, if you are below the non-SME thresholds but using a lot of energy, then you better check additional national requirements!

5. I already did an audit last year, so I am good for the coming years

Many countries will indeed leave you alone, as you should need to show an energy audit report that is less than four years old. But some Member States work with hard deadlines, i.e. fixed compliance periods, so you might have to do your audit again, sooner than you had hoped.

6. I don’t own assets, I just rent a building

When you rent a building, you have no influence on the energy efficiency of that building (insulation, double-paned windows, installed HVAC systems, etc.), so the audit responsibility lies with the landlord, right? Not necessarily! Many countries still require you to audit the energy consumption you can influence, such as equipment, heating and lighting.

7. I don’t know how much energy I consume, I just pay a fixed consumption fee in my rental contract

Taking the rented buildings situation one step further, you might not have a direct contract with the utilities company, and your landlord might not even have split metering data per tenant (e.g. when you rent a shared office space). Many countries let you off the hook, but guess what… some don’t, and still put the audit obligation on you.

Someone has done their homework! It is correct that some countries apply the so-called de minimis approach, stating that only 90% of the total energy consumption of the group has to be covered, which allows smaller legal entities with a low energy consumption to be excluded from the audit scope. But note that this de minimis only counts within national borders, some countries apply other percentages than 90%, and other countries do not allow any exclusions but require 100% of your consumption to be covered.

9. I have similar facilities all over Europe, and through sampling I can exclude many from my audit scope

Sampling is allowed in most countries, but some Member States don’t care if you have to do tens or hundreds of audits of exactly the same facilities one by one. And where sampling is allowed, you better check the rules because – surprise – different countries are taking different approaches.

Most (not all!) Member States allow ISO 50001 certification as an alternative form of compliance to the audit obligation, and some countries even allow ISO 14001. But only when these management systems include an energy audit that is in line with the national requirements. So actually, you’re not really off the hook, the audit is just wrapped in alternative gift wrap – Merry Christmas!

11. I have an energy performance certification for my building

Congratulations! And lucky you, this EPBD (European Performance of Buildings Directive) certificate might be regarded as an exemption, but not automatically. You should get approval from your local authorities.

12. I am based in the UK, so with Brexit, EU legislation will no longer be applicable

Article 8 is part of the EU Energy Efficiency Directive, and a Directive is always transposed into national legislation, such as in the UK ESOS legislation. In the 2020s, it might be a different story – who knows, but for now your business is still bound by the December 2019 deadline!

13. There are no compliance checks or penalties for non-compliance

If you believe this, you could be in for a nasty surprise! It’s true that some countries have been slow to check compliance for the 2015 period, but other countries, such as Germany and the UK, have been out there knocking on company doors. And many more checks are anticipated in the next round, as national legislation is now firmly implemented everywhere, and processes are properly established. So just do the audit: penalties for non-compliance can be up to €50,000 or even a percentage of your turnover or energy consumption, and – just a crazy thought – you might even save some money if you implement the identified energy savings!

Are you now confused, feeling lost, not so sure anymore that Article 8 does not apply to you? Don’t worry, we’re here to help and happy to develop a compliance strategy for your company. Just give us a shout! 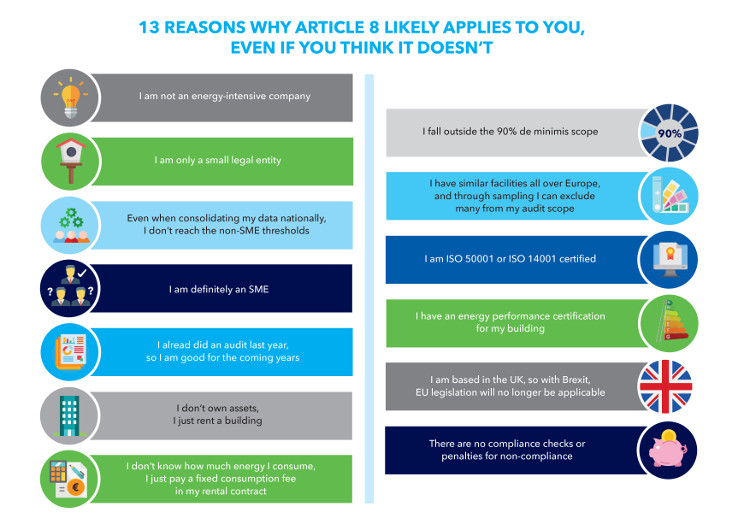 Do you need more information?

Dowload the infographic to share it with your colleagues

13 reasons why Article 8 may apply to you, even if you think it doesn't

Will you be compliant by December 2019? MEET8, our new online tool takes the stress out of Article 8 compliance!

A faster journey to an ISO 50001-compliant energy management system.