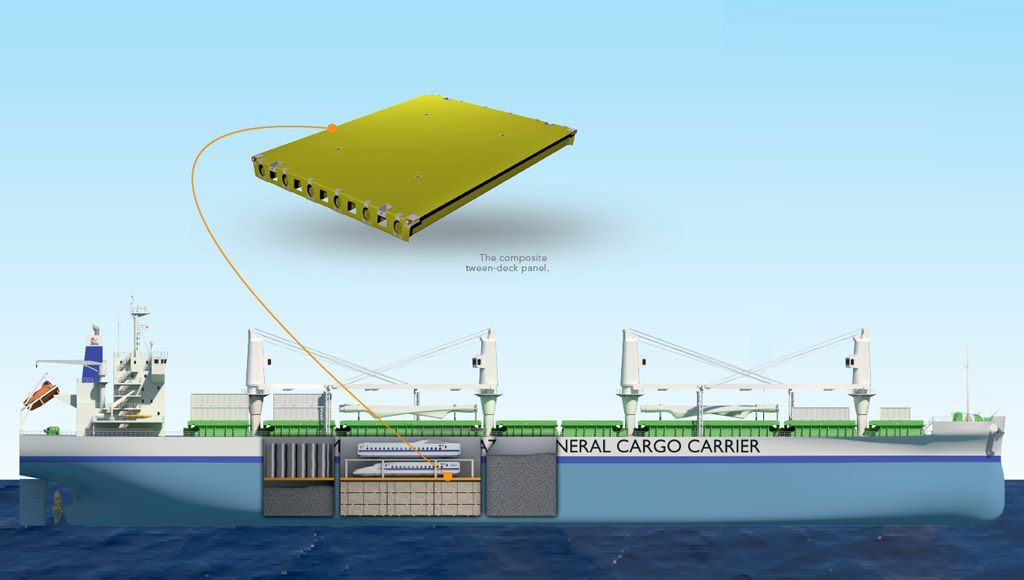 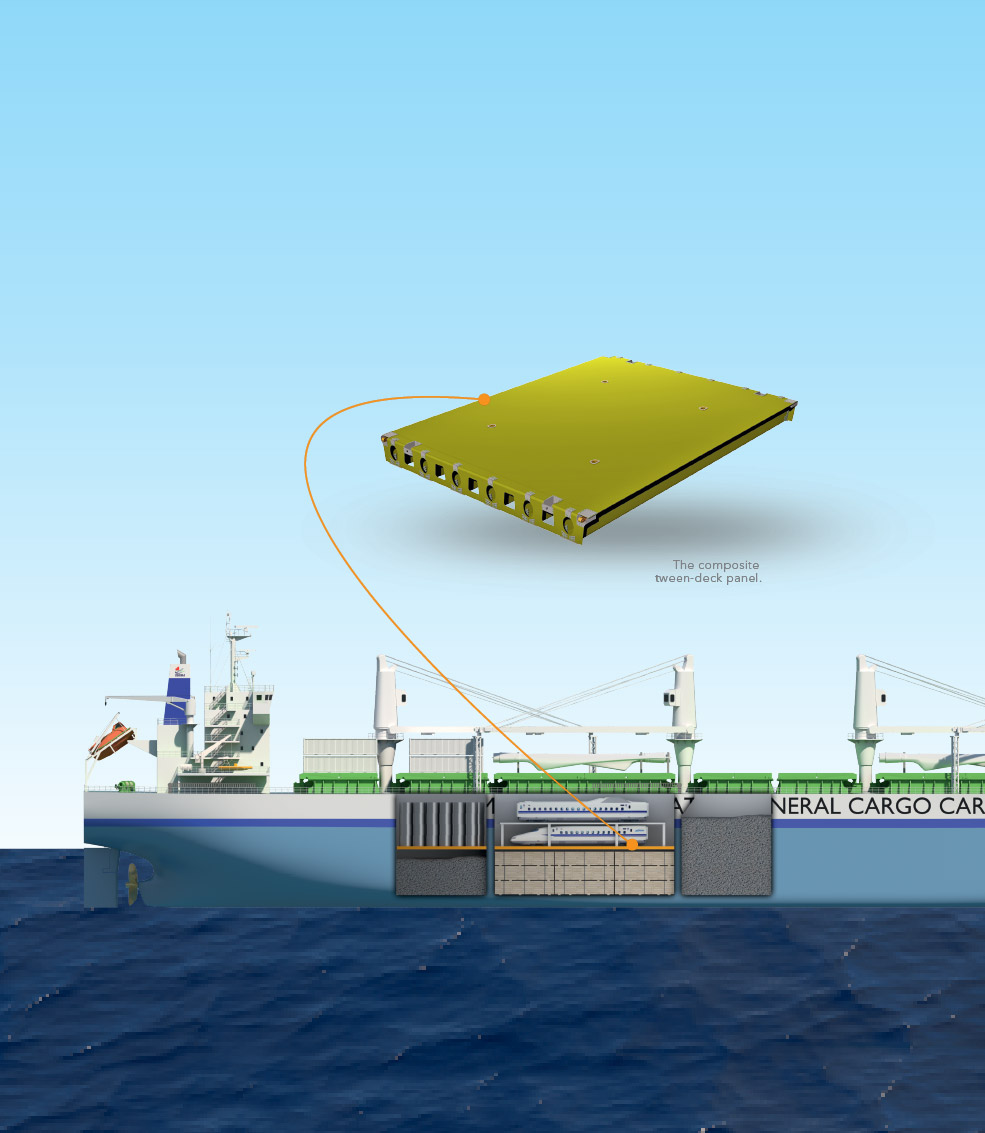 Composites save the weight and energy

As the dry bulk sector recovers from its prolonged downturn, shipowners are seeking more economical, innovative and versatile solutions. A report in the 2017 issue of Bulk Carrier Update presented a joint development project (JDP) between Oshima Shipbuilding and DNV GL, a frequent partner, for a new, highly efficient 65,000 dwt open-hatch general cargo carrier concept. One of the key features of this concept is the use of lightweight composite materials for the tween decks.

Flexibility is a critical requirement of the open-hatch carrier segment and there is a growing tendency for vessels to carry various different cargoes during a single voyage. In the early stages of the JDP, Oshima had interviewed some of the leading players in this market to gain insight into the owners’ particular demands for cargo carrying and loading capabilities, as well as their fleet profiles and typical trading patterns.

The 210-metre length design is characterized by a large cubic (77,000 m3) and deadweight capacity (65,000 tonnes) but with a comparatively shallow draught (13.1 metres) thanks to its wider breadth. It is equipped with eight box-shaped cargo holds with full-width hatch openings of both the “piggyback” (six holds) and folding types (two holds). The vessel has been further optimized for project cargoes with the inclusion of two longer cargo holds. Four of the holds can be fitted with tween decks to allow for segregating different cargoes. Because of the vessel’s wide breadth and the hull’s double sides and bottom it would not need to use the holds to carry water in heavy ballast conditions.

The new vessel concept draws heavily from the Oshima ECOShip 2020, a 2011 JDP between Oshima and DNV (prior to its merger with GL). The ready-to-order design gives shipowners the option of installing a number of innovations, such as battery-assisted hybridized cranes and an optimized main engine with a PTO/PTI (power take-out/ power take-in) shaft generator.

Made from glass-fibre-reinforced plastic (GFRP), prototypes of the tween decks solution were developed in partnership with Japan’s I-Know Machinery and Norway-headquartered solutions provider Compocean, with manufacturing taking place at Compocean’s Latvian plant. However, for production this task will need to be undertaken at a specialist workshop in Asia, within easy access of the shipyard or near a port where the ship can berth to pick up and install the tween decks.

From a shipbuilding perspective the use of composites is really no different from that of any other material used in ship construction: “Manufacturing outside the shipyard is not a particular challenge, given that most components in shipbuilding are manufactured outside the shipyard. There are also plenty of composites manufacturers in the world. The tween decks are designed to be installed (and moved/mobilized) by the ship’s own cranes. When not in use the tween decks are stored on container sockets or on a dedicated support point. When mobilized for use, they are supported by dedicated support brackets in the cargo holds.”

The tween-deck solution for one short cargo hold comprises two identical panels; each is constructed of a single skin composite, with the top plate connected to the corrugations, which are in turn fixated to end plates. Retractable brackets welded to the hold’s transverse bulkheads support the panel ends.

Raw materials for composites (glass fibre and resin) are typically more expensive per kilogram compared to steel. However, Oshima says that the production process (for its structural design) is also much more efficient compared to steel tween decks.

Oshima adds that the final tween deck is comparable in cost with its steel equivalent due to a significant weight reduction compared to its steel equivalent (around 40 to 50 per cent). Moreover, because conventional steel tween decks are smaller, more units are needed than in the composite solution, which also cuts down on installation time when in port.

Oshima estimates that fuel savings of 0.25 per cent are achievable with four composite tween decks, but adds: “For the owner, the possibility to load more cargo is the largest contribution to the payback of the investment. There is also a saving in maintenance and reduced time in port due to shorter installation time, but the value of this has not yet been quantified.”

DNV GL believes that recent progress at a regulatory level is helping to boost confidence among shipowners that composite materials can be a safe and economic solution. “The interest among shipowners but also well-known shipyards is increasing in our opinion. Recent advances at the IMO level on new guidelines for composite components (MSC.1/Circ.1574 on Interim guidelines for use of fibre reinforced plastic elements within ship structures: Fire safety issues) and the popularity of the ELASS network are just two examples.”

The overall efficiency savings must, of course, be viewed in the context of the vessel concept’s other innovations. An optimal-size battery pack partially substitutes for the auxiliary engines and compensates for fluctuations in power demand. A DNV GL feasibility study concluded that the battery pack could allow a 20 per cent saving in crane operation fuel costs, with an estimated payback of six to nine years, while cutting engine running hours by 50 per cent. Overall, the vessel is 55 per cent below the EEDI reference line for cargo ships.

A study of comparable open-hatched cargo vessels with typical load profiles indicated fuel savings of up to 10 per cent in operating an optimized main engine with a PTO/PTI shaft generator, in addition to a significant drop in maintenance costs. The base design is equipped with a six-cylinder, two-stroke MAN Tier III engine configured to run on low-sulphur fuel oil (LSFO). There is also the low-sulphur super eco fuel, a mixture of light cycle oil (LCO), gas-to-liquid (GTL) and water which can be run without the use of EGR or SCR systems that Oshima has developed in partnership with the industry. Alternatively, owners will have the option of an engine operating on HFO and scrubbers.

Oshima Shipbuilding is confident that while the dry sector has experienced a lean few years, there remains a high level of interest and trading scope for mixed cargo carriers. “The demand predictions for newbuilds are readily available from companies specializing in market studies,” says the shipbuilder. “However, composite tween decks are available for retrofit on existing openhatch bulk carriers. Hence, the market for composite tween decks is not limited to the newbuilding market.”

structure advisory and services and resources 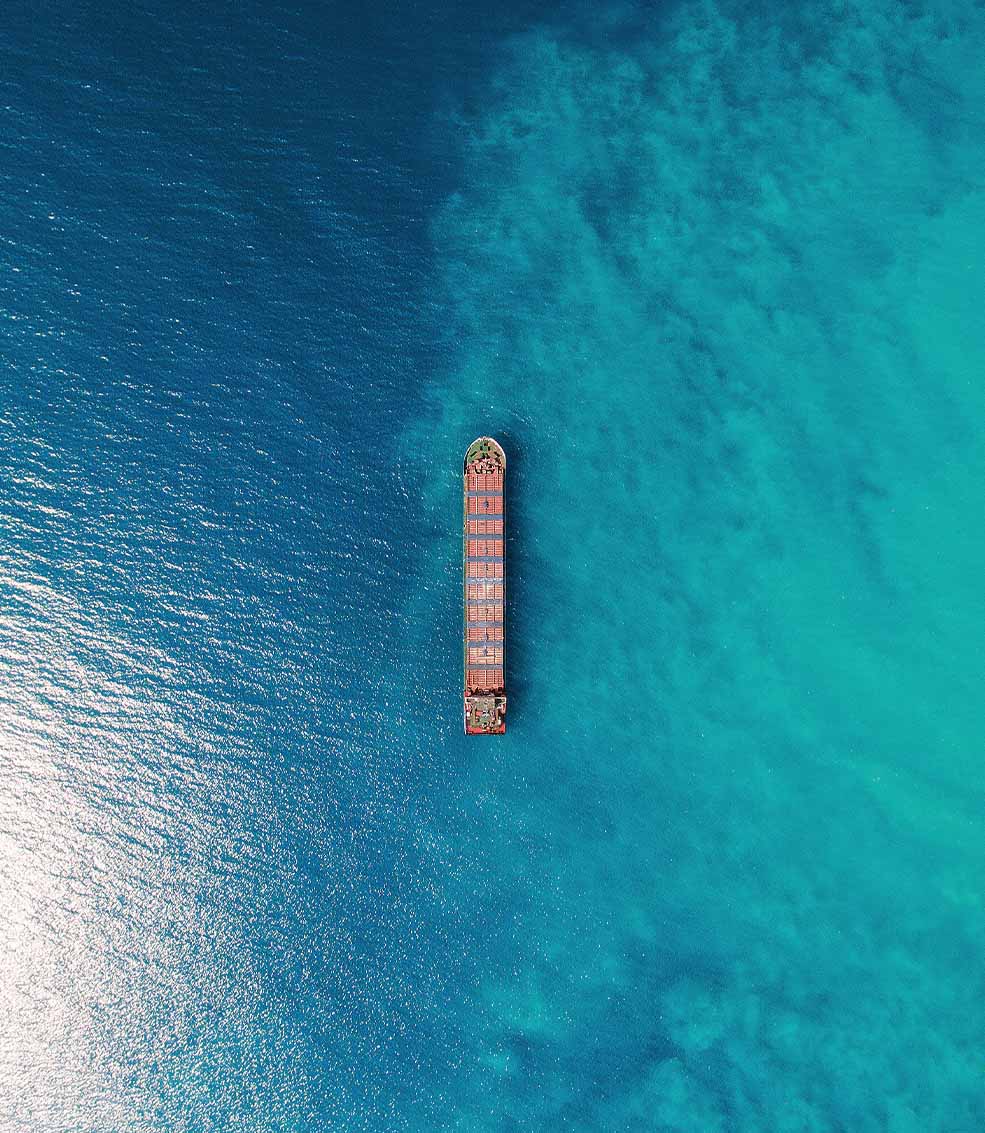 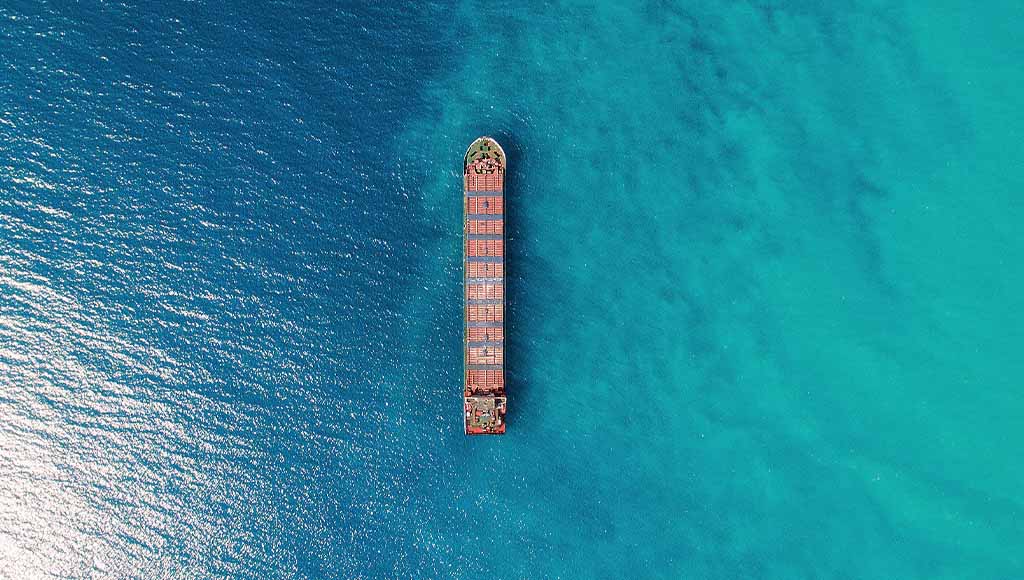 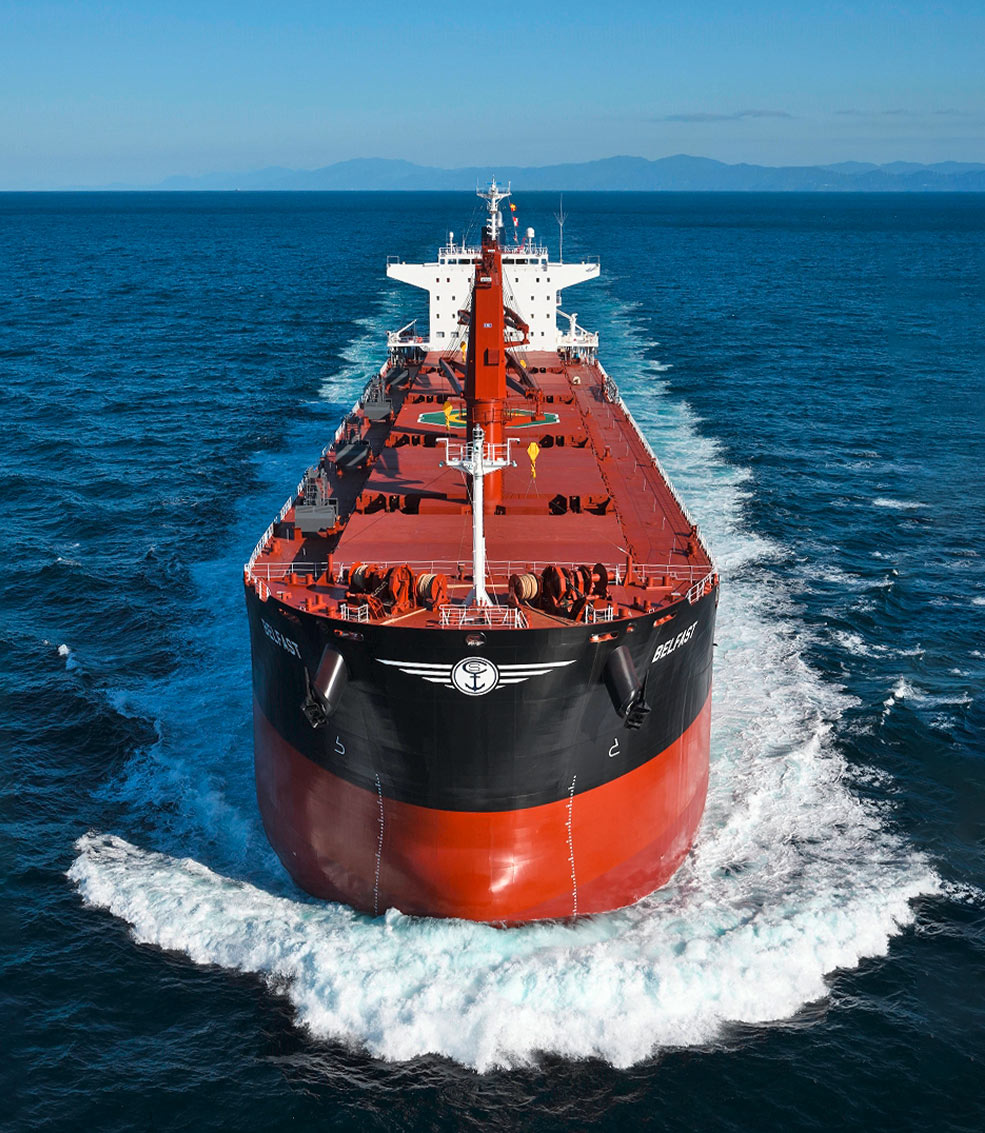 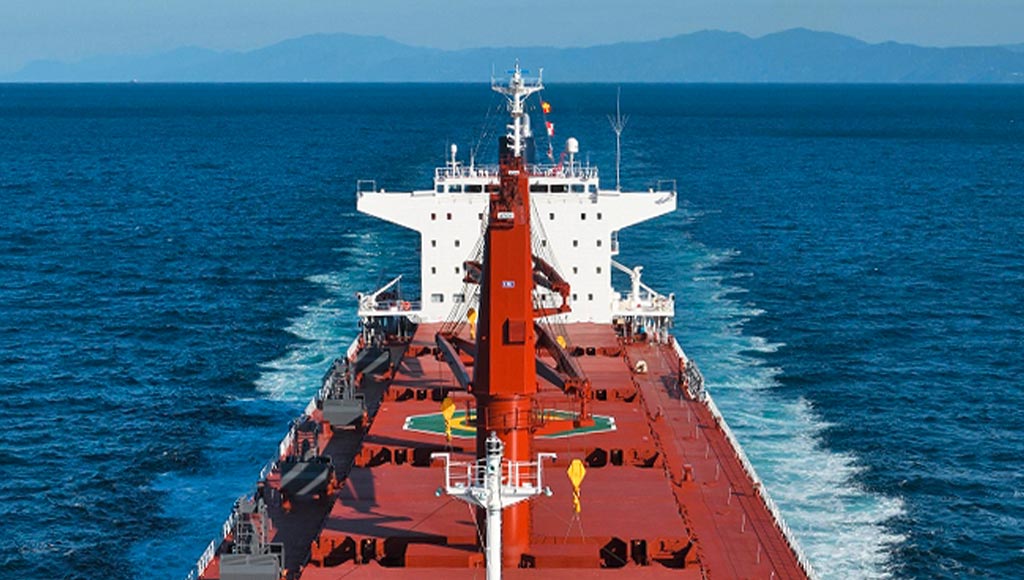