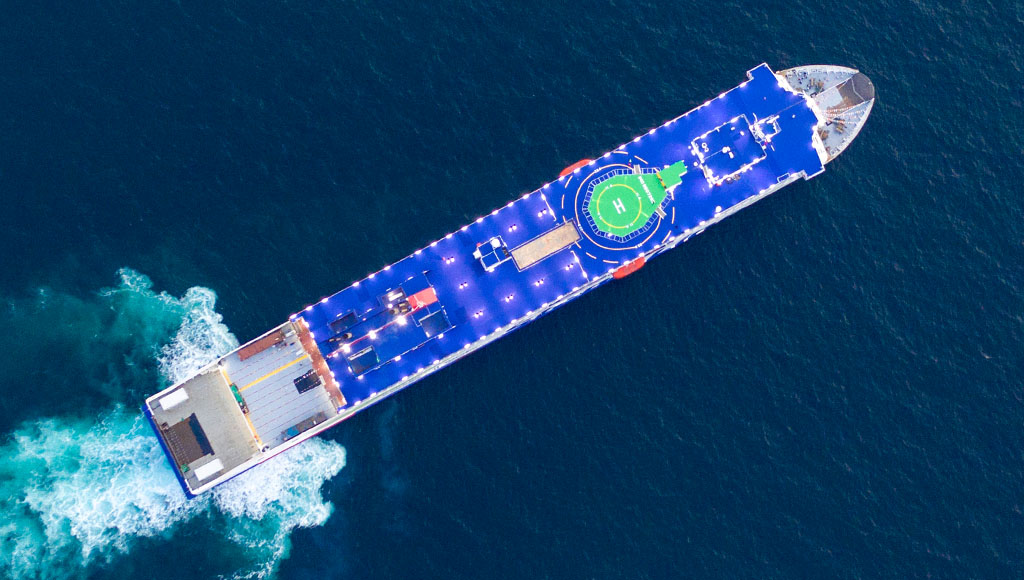 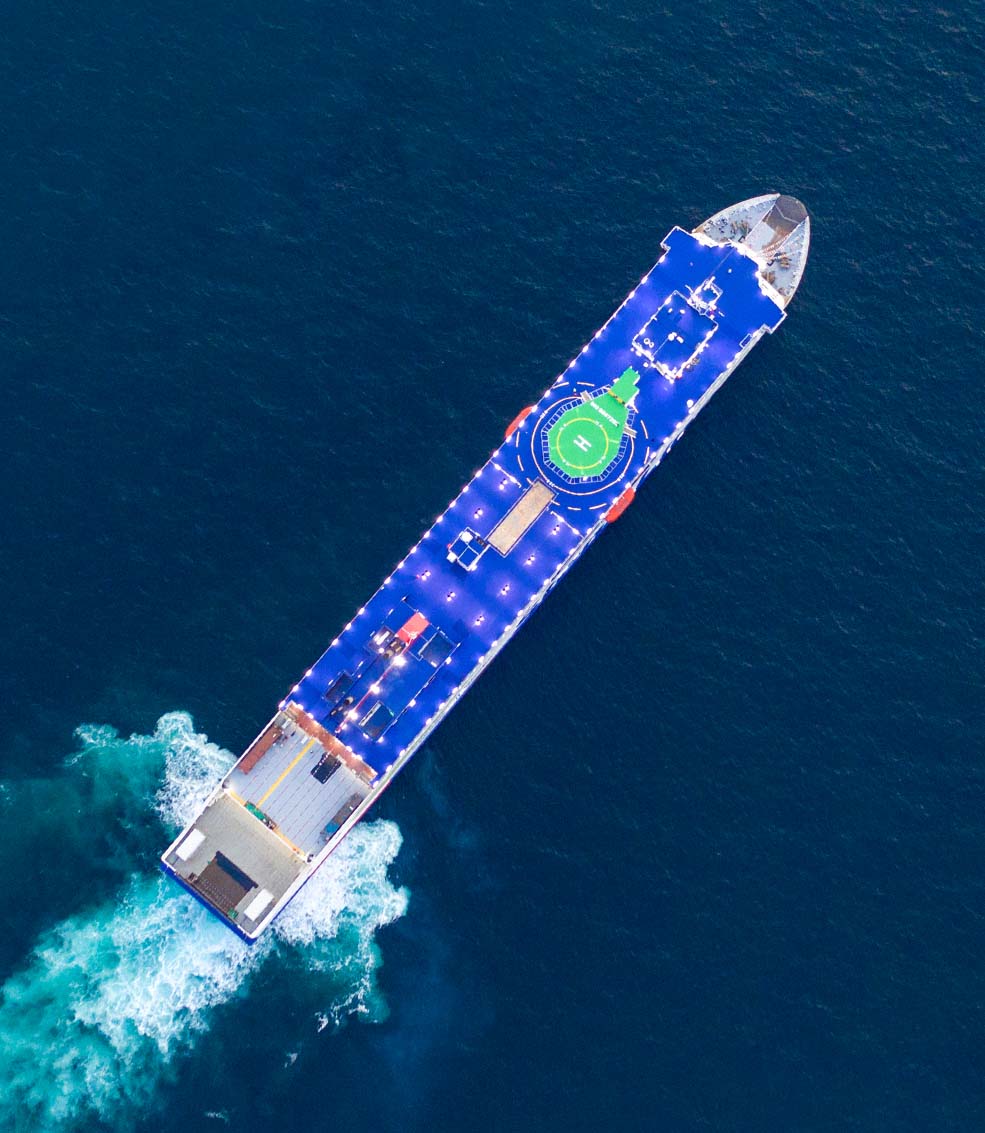 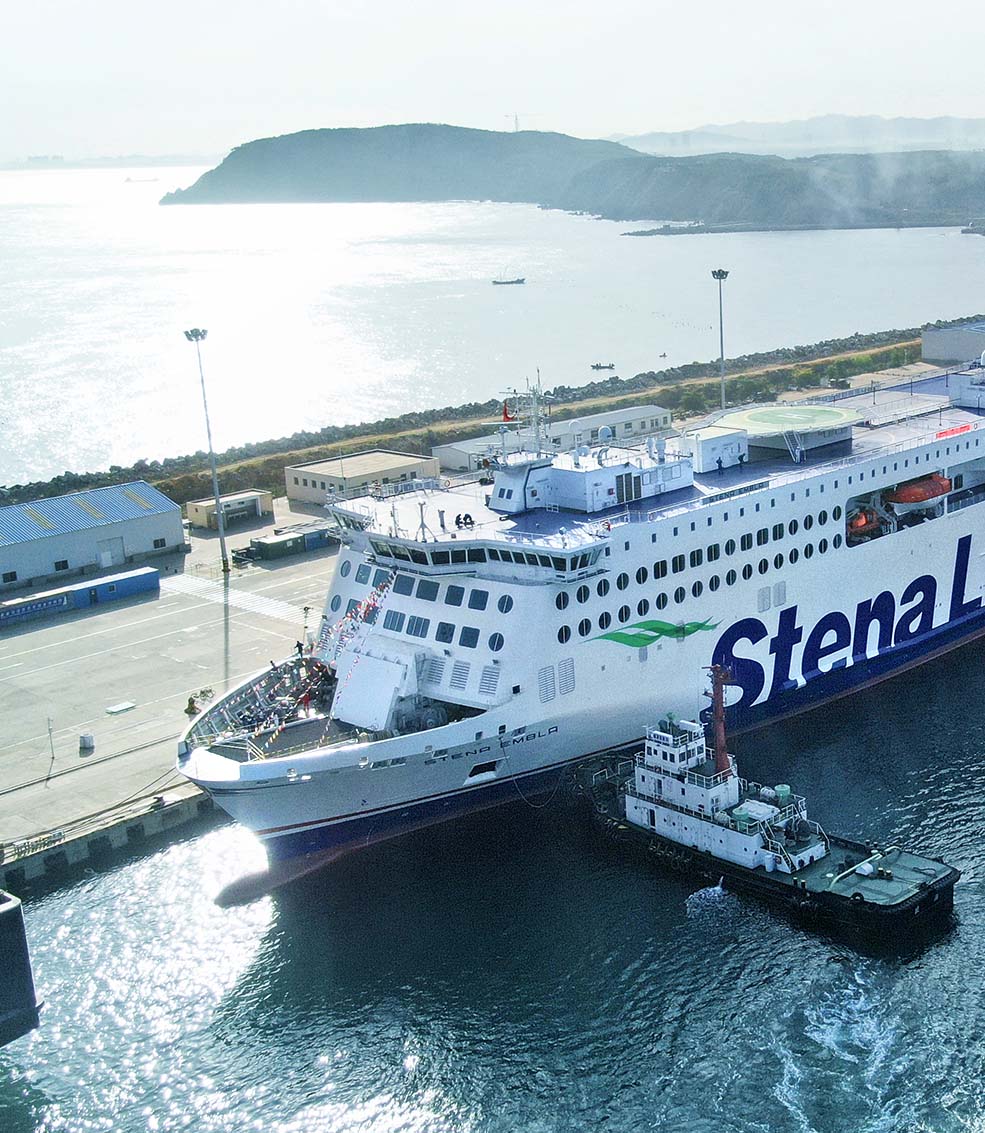 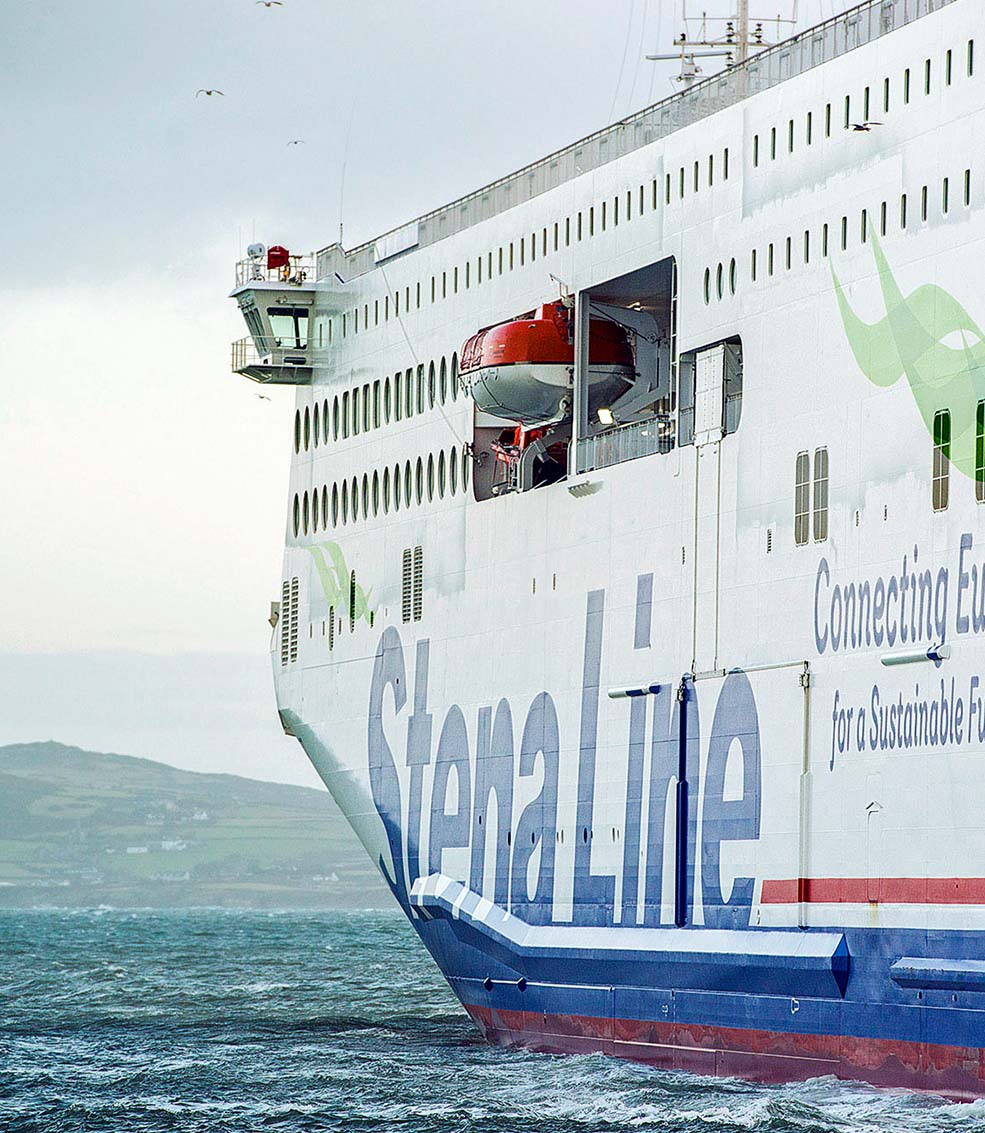 The E-Flexer RoPaxes are Stena RoRo’s new generation of ferries that are also being built for external customers. CEO Per Westling provides key insights into how Stena has succeeded in creating a flexible platform that can be upgraded continuously to deliver quality, tailored vessels that are ready for the future.

As a major ferry company operating around 40 RoPaxes and 15 ro-ros, fleet renewal has always been important for Stena and the company has been a regular buyer of new tonnage. The E-Flexer programme, which currently comprises 12 ordered RoPaxes, emerged out of discussions between Stena RoRo and Stena Line focusing on newbuild requirements from a longer-term perspective.

“Environmental issues were key and it was very important for Stena Line, running 18 different routes, to have optimal flexibility as to where to operate its vessels. Switching ships between routes is important for market optimization, but it’s expensive if your vessels are one-offs, as they will always need to be modified to a greater or lesser degree. We wanted ships that are modern, fuel efficient and future-proofed, and also modular so they can be used, for example, as both day ferries and night ferries. That provided the impetus for today’s platform,” says Westling.

What makes the programme exceptional is that Stena has full control over the investment. At the outset they just needed to find a good place to build the ships at a reasonable cost and expand from there. “China had been in our sights for some time. We were pretty sure we could find a cost-effective solution, having already learnt a great deal from the Global Mercy (custom-built for Mercy Ships) ordered at Tianjin Xingang Shipyard two years before. We also had a good idea which makers we could work with in a balanced way,” says Westling.

We wanted ships that are modern, fuel efficient and future-proofed, and also modular so they can be used, for example, as both day ferries and night ferries. 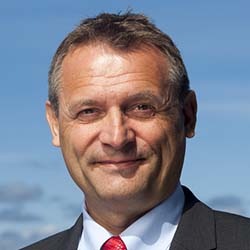 A common mindset on quality and technical expertise

“In China, culture is extremely important. The two major reasons we opted to go with the AVIC International Shipyard, later to be acquired by CMI Jinling Weihai, were, firstly, that their management was very internationally oriented. They’d been exporting to big global aircraft manufacturers for a long time, so they understood our mindset and shared our focus on quality and technical competence,” Westling explains.

“Secondly, the shipyard already had close ties with the ship designer, Deltamarin, with whom we have collaborated for many years. There was good chemistry between all parties and we were confident the yard could deliver despite it being new to passenger ships,” adds Westling.

Customized modifications are no quality barrier

Stena has traditionally ordered RoPaxes in Europe and Korea, and tankers and ro-ros in China. “Country risk is a key issue. You really need to have experience and knowledge of building ships in faraway places with a different culture,” Westling says.

“We’ve now delivered six E-Flexers with very few guarantee or quality issues. The product is reliable and delivered on time. Everyone is happy. The main thing has been cementing relations with the yard. Despite the pandemic we’ve continued to develop new concepts despite not having been able to travel. We have highly motivated staff who listen to customers and are adaptive to commercial prerogatives,” he adds. 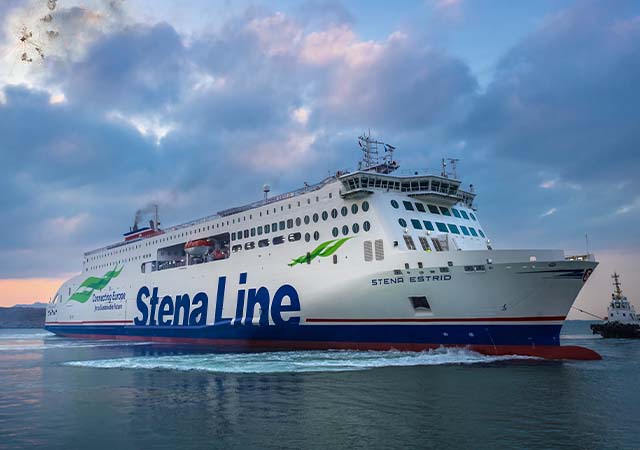 First Ferry in the E-FLEXER class: The “Stena Estrid” has been serving in the Irish Sea since 2020. The state-of-the-art ferry is LNG-ready, optimized for efficient loading and unloading operations, and has an increased freight capacity.

How does Stena ensure customized modifications for each vessel go smoothly? “Our model is unique in that we own the ships but charter them out long term. We’ve evolved a system to ensure we build exactly what clients want. With each client we establish a joint working committee, which allows them to influence and monitor progress through design and construction. We remain the entity in contact with the yard. This clean-cut approach works very well and is key for both us and our clients.”

Emissions reduction is an ongoing process

The E-Flexer ships were designed for energy efficiency from the outset but before the advent of CII and upcoming Fit for 55 (“Fuel EU”) regulations in Europe. Keeping the series up to date and in compliance with new GHG reduction rules is an ongoing process.

“Decarbonization is certainly one of the biggest challenges that has faced the industry in my 37 years in the business. I don’t see any single solution but opportunities to build knowledge step by step.”

Stena used conventional diesel machinery for its first two ships, the Stena Estrid and Stena Edda, but with DNV’s LNG-ready class notation, it started to introduce future-proofing changes on the third ship in the series, the Galicia for Brittany Ferries, by installing scrubbers.

Brittany opted for dual-fuel LNG for its second and third ships. For its next two Stena is going a step further by adding a large hybrid electric package. “Being able to switch power between shaft lines offers great flexibility, as one side can run on batteries and the other on LNG. The PTI power is equivalent to 17.5-knot speed on batteries only. The concept allows for improved battery technology in the future, as well as power feed from fuel cells,” Westling says. 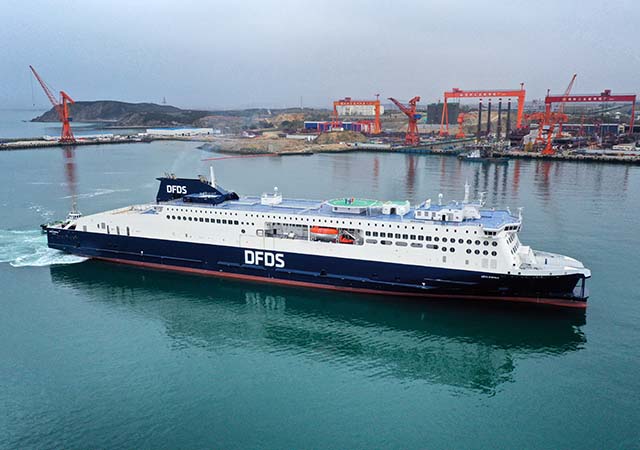 A more environmentally friendly ferry connection between Calais and Dover: Danish shipping company DFDS has been operating the “Côte d'Opale” – a RoPax from Stena’s E-FLEXER series – on the route since summer 2021.

Stena is also mulling alternative fuel options and how they can be applied to the series going forward. “For Stena Line the first step is fuel mixing, blending biodiesel and smaller amounts of methanol into gasoil. But that won’t take us all the way. We will modify the next ships for dual-fuel methanol. The technology already exists. We rebuilt the Stena Germanica with four main engines to run on methanol in 2016 and it has clocked up more than 10,000 hours of operations with no issues,” says Westling. 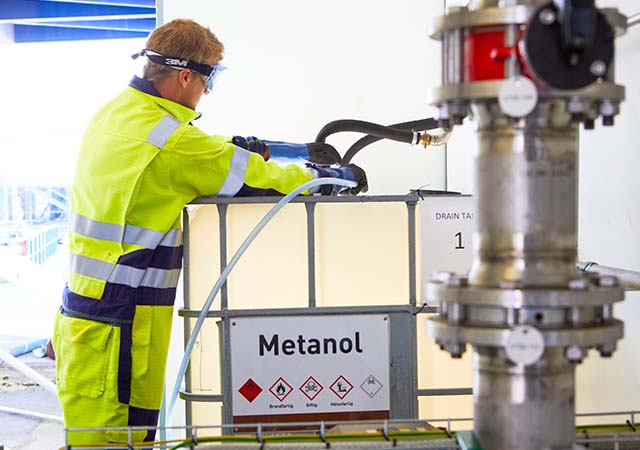 Focus on methanol: Stena RoRo’s “Stena Germanica” was converted to run on the alternative fuel in 2016. More ships will follow.

“We are also analysing how to ‘step down’ carbon content, moving from ‘grey’ methanol made from natural gas to ‘blue’ and then ‘green’ methanol, as well as carbon capture and fully synthetic fuels in the future. We have a joint venture with the world’s second-largest methanol producer, Proman in Switzerland, investing in green methanol factories as a concrete way to reduce our carbon footprint,” he adds. Proman has methanol tanks in 122 ports worldwide making it very easy to fill any standard ships tanks. This could easily be expanded to the ferry market.

Other alternative fuels are no showstoppers

As for ammonia, Westling says it will take time before this technology is technically and commercially available. “The same with hydrogen but in that case, you have further issues related to lower energy content. Both will arrive and in the meantime we’re happy to add flexible main engine solutions including dual fuel with DNV’s ammonia-ready class notation included as well as large battery hybrid systems. However, my own view is that ammonia may still be too risky, especially for passenger vessels,” he said.

“What’s clear is that ferry companies have to begin making choices now, as it takes time to build or convert ships and we can’t slow steam in our segment of the business. Beyond LNG and methanol, we’re open to other fuel options as long as we believe in it ourselves,” Westling adds.

As to how long the E-Flexer series can grow, he sees no limitations. “We will keep going. I don’t foresee any particular showstoppers. The size and economy of the ships has proved attractive to different companies and routes, from Dover to Calais with DFDS to the icy waters of Canada with Marine Atlantic. The name says it all!”

What does Westling expect of a class society in such a big project? “What we need is access to a full range of expertise, not just certification. You don’t find that any more within flag state organizations, as it’s been almost 100% delegated to class. This is clearly the case with DNV, where we have a direct line to top decision makers. It’s very important for us to be able to go to Høvik, thrash out problems and find solutions. I’m very happy with their support,” he says.

Marketing and Business Development Manager at DNV Sweden, Jan-Olof Grønhult, explains: “We do a lot of pre-contract work, commenting on each concept and suggesting improvements, in addition to the modifications needed depending on the route and operator. Stena has to understand the implications of each customer to price the vessel, with commercial negotiations going on in parallel. There are a lot of back-and-forth iterations and navigating complex regulations. You may have to cut the amount of lane metres for regulatory reasons. Then we issue all statutory and class certificates enabling them to operate. We are in close contact with all parties, including flag states, the whole way.”

He adds that DNV has a project manager and full team on site in China, with tremendous staff continuity. “That kind of presence is difficult for our competitors to match,” he said.

Westling’s take on the RoPax market is positive. “Demand for RoPax cargo has remained strong throughout the pandemic, although it’s been hard for pure night ferries and cruise ferries. The influx of new steel has also been quite balanced so the market has been stable, nor have we seen any speculative newbuilds. RoPaxes are hard enough to build on spec anyway. Some attempts around the time of the financial crisis did not end well,” he says.

“CII and the Fuel EU rules, as well as a potential ETS and the cost of CO2 emissions, will impact our business a lot in four to five years’ time but no one is sure how,” he adds. “You can of course reduce speed to comply, but then your ship will lose its appeal in a market characterized by tight schedules. It’s a question of watch this space.”

Get all insights on the regulatory requirements and possible solutions 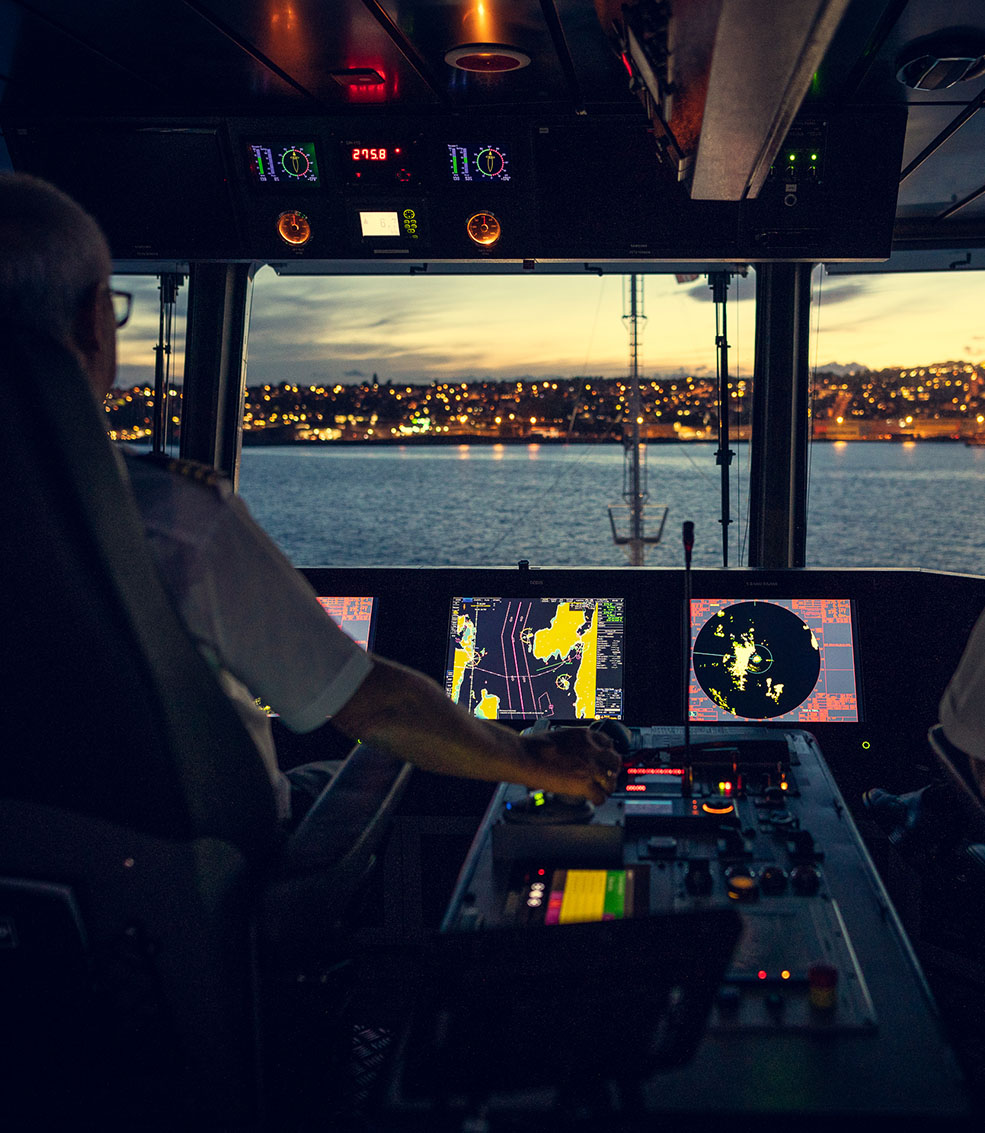 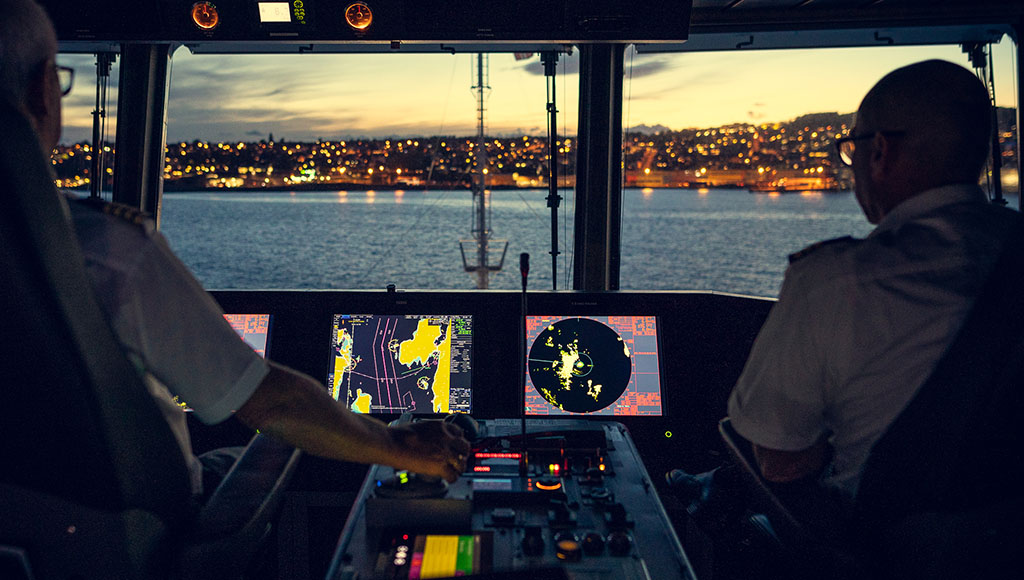 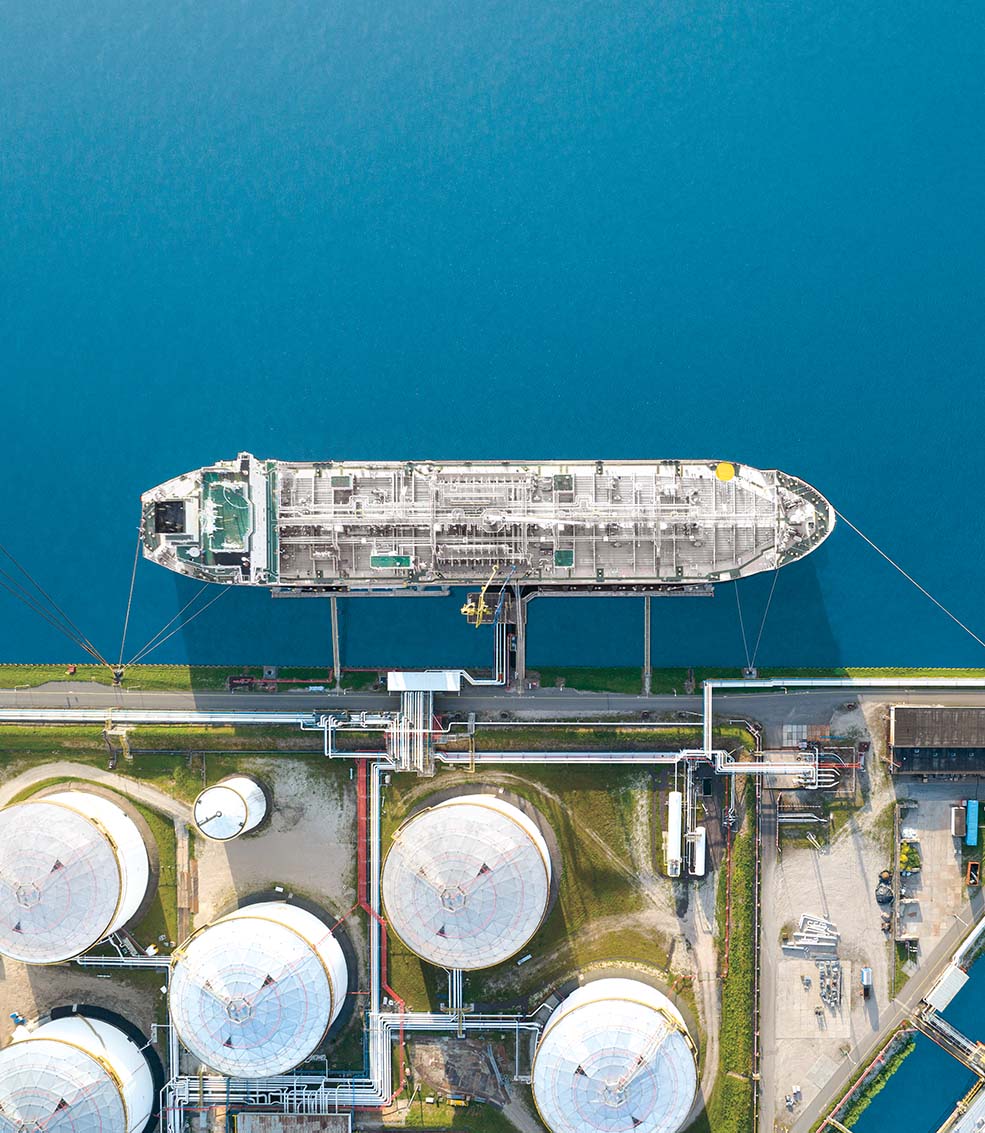 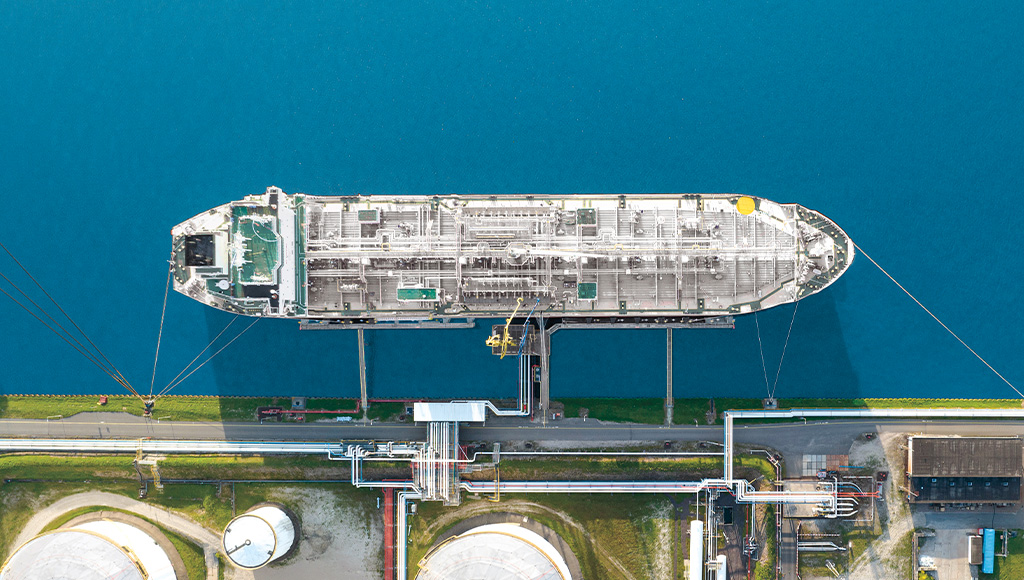 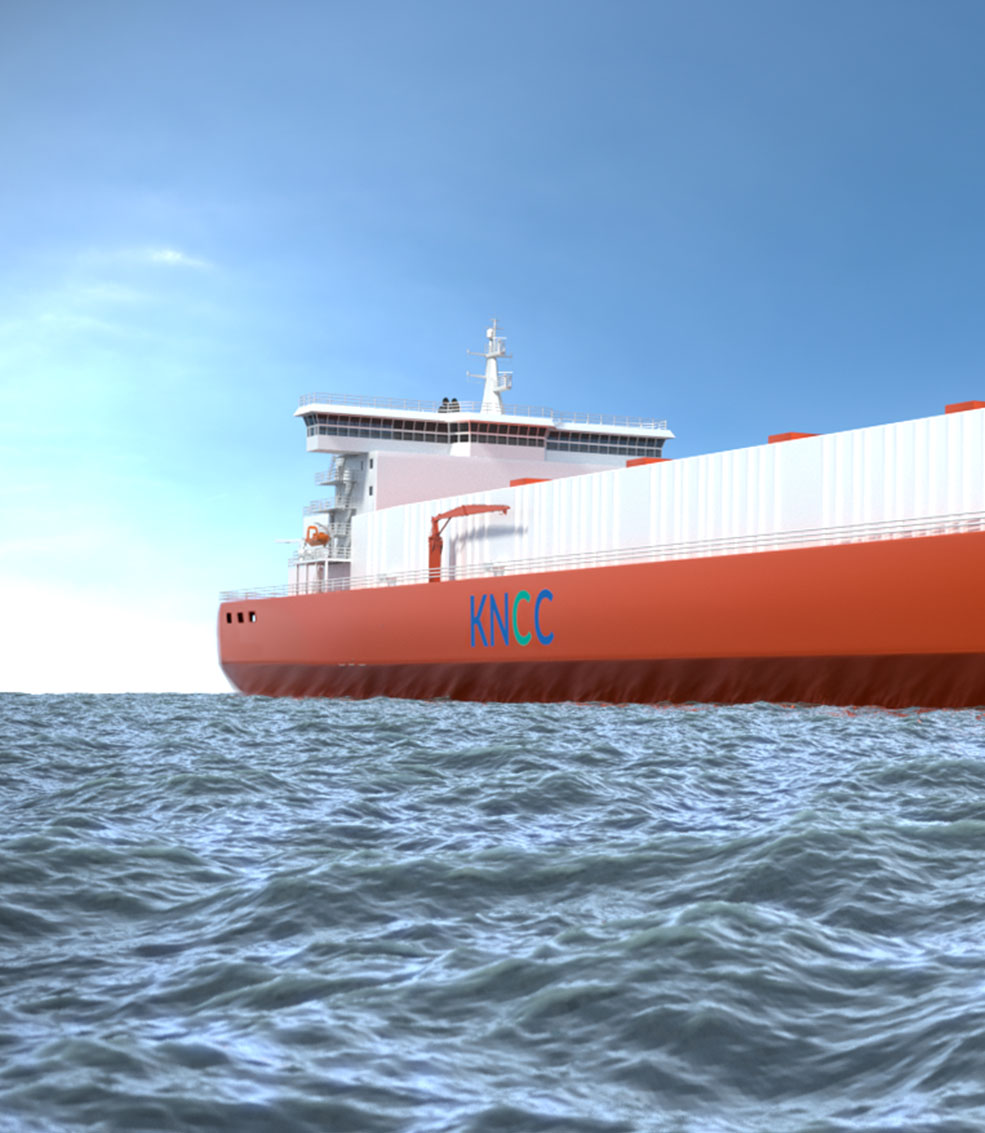 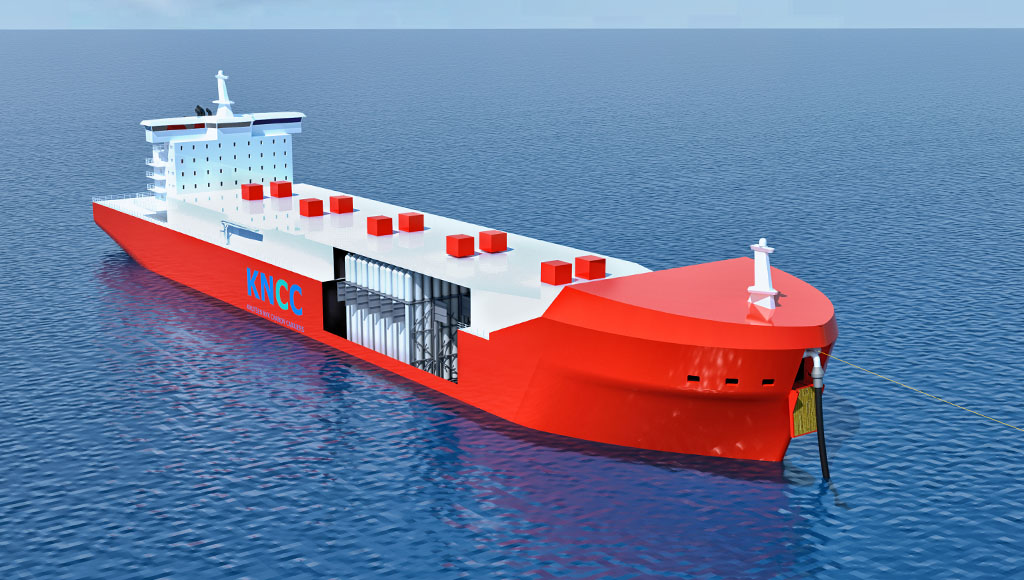