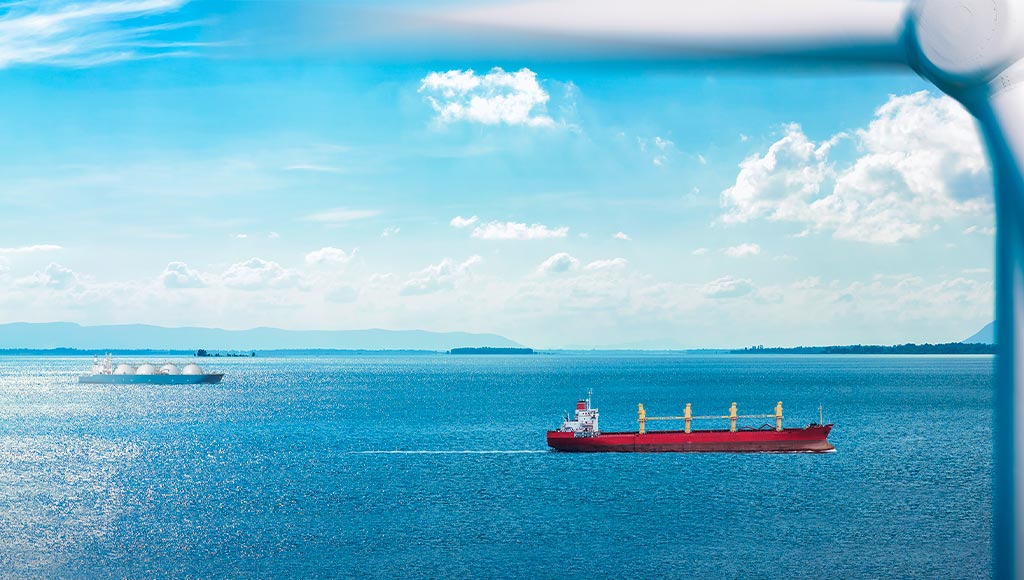 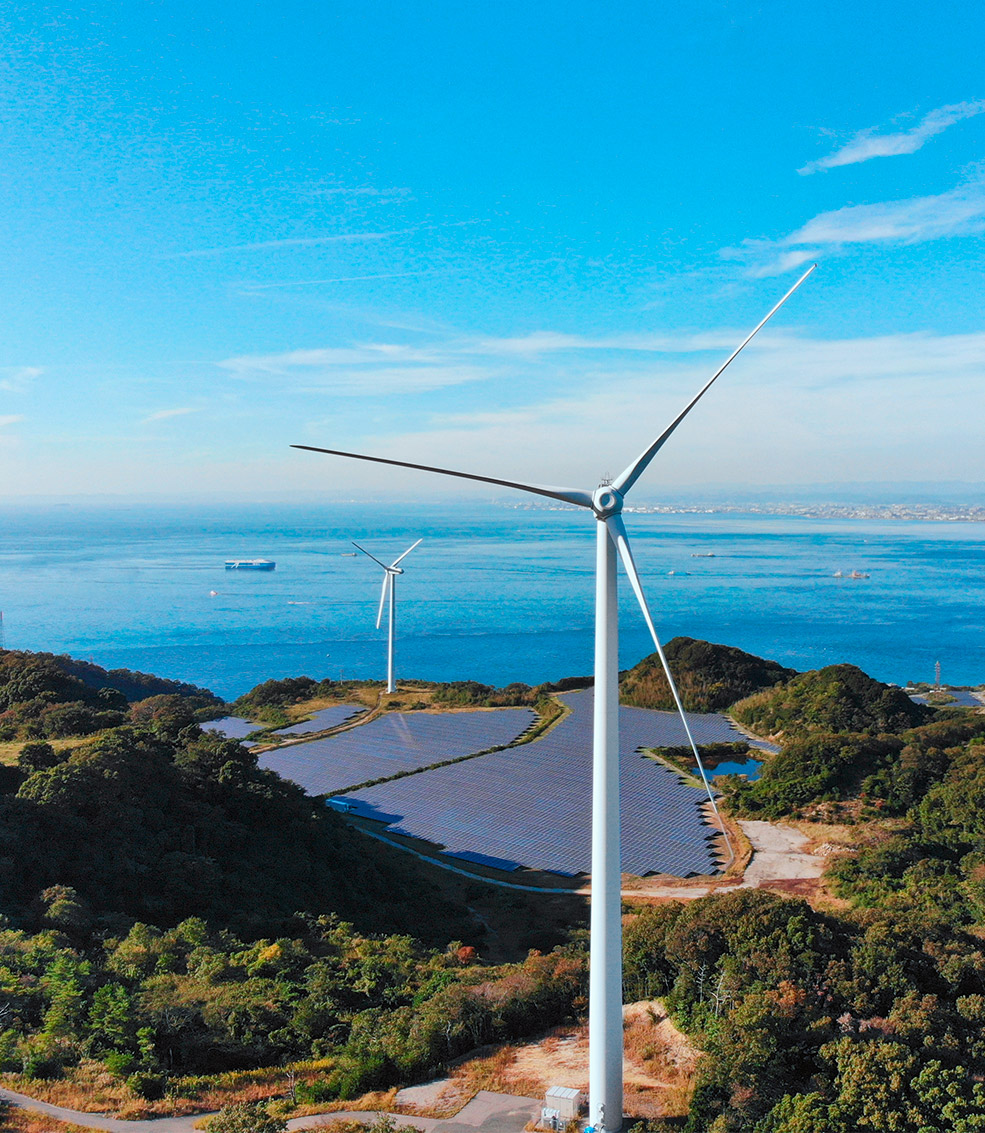 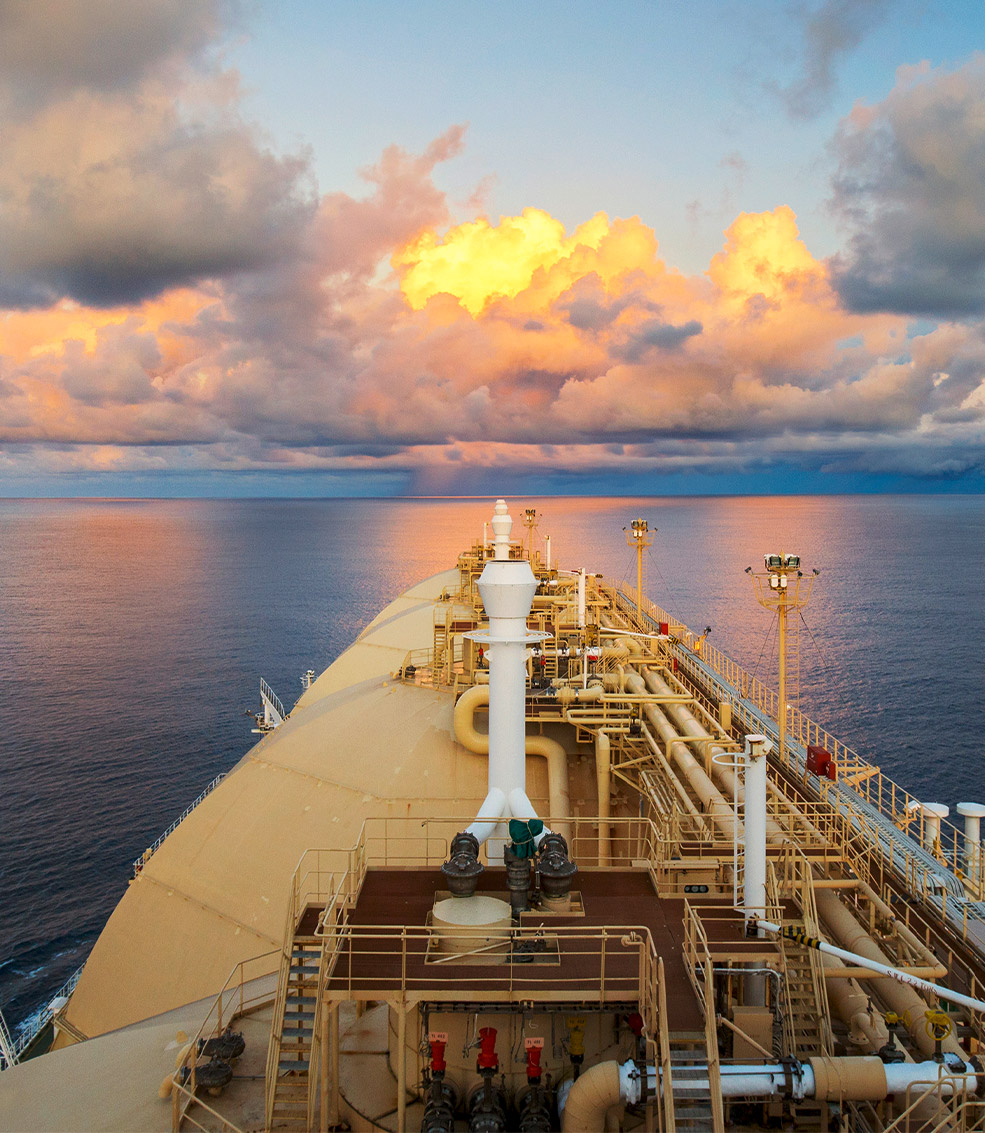 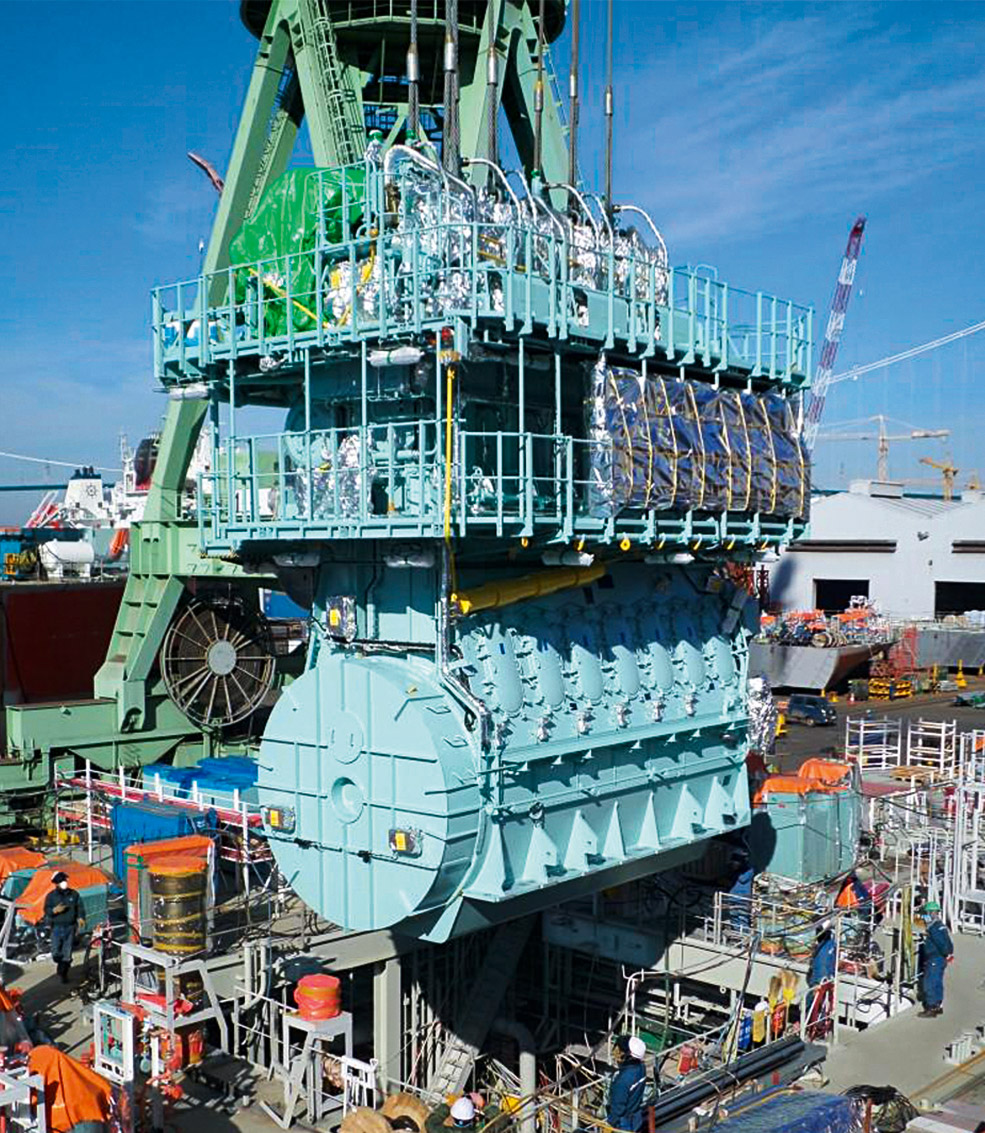 The destination for decarbonization is already set as the International Maritime Organization (IMO) has made the large-scale development and deployment of carbon-neutral fuels a core part of its long-term strategy. The Poseidon Principles signed by major shipping banks for assessing the climate alignment of ship-finance portfolios illustrate the pressure to reduce greenhouse gas (GHG) emissions from shipping. Cargo owners and charterers have also begun addressing GHG emissions when selecting shipping vendors.

The Maritime Forecast to 2050 creates 30 scenarios to model across three decarbonization pathways. The pathways as illustrated in the graphic below are No ambitions, IMO ambitions and Decarbonization by 2040, where increasing stakeholder pressure on the industry results in IMO adjusting its Initial GHG Strategy to instead target faster and/or greater decarbonization. “Bio-” indicates a biofuel, “e-” refers to electrofuels, and “blue” signifies fuels made by steam-reforming natural gas and capturing the by-product carbon dioxide (CO2). Drop-in fuels are those that can be used in an engine or fuel cell without any other retrofit capital expenditure (capex). 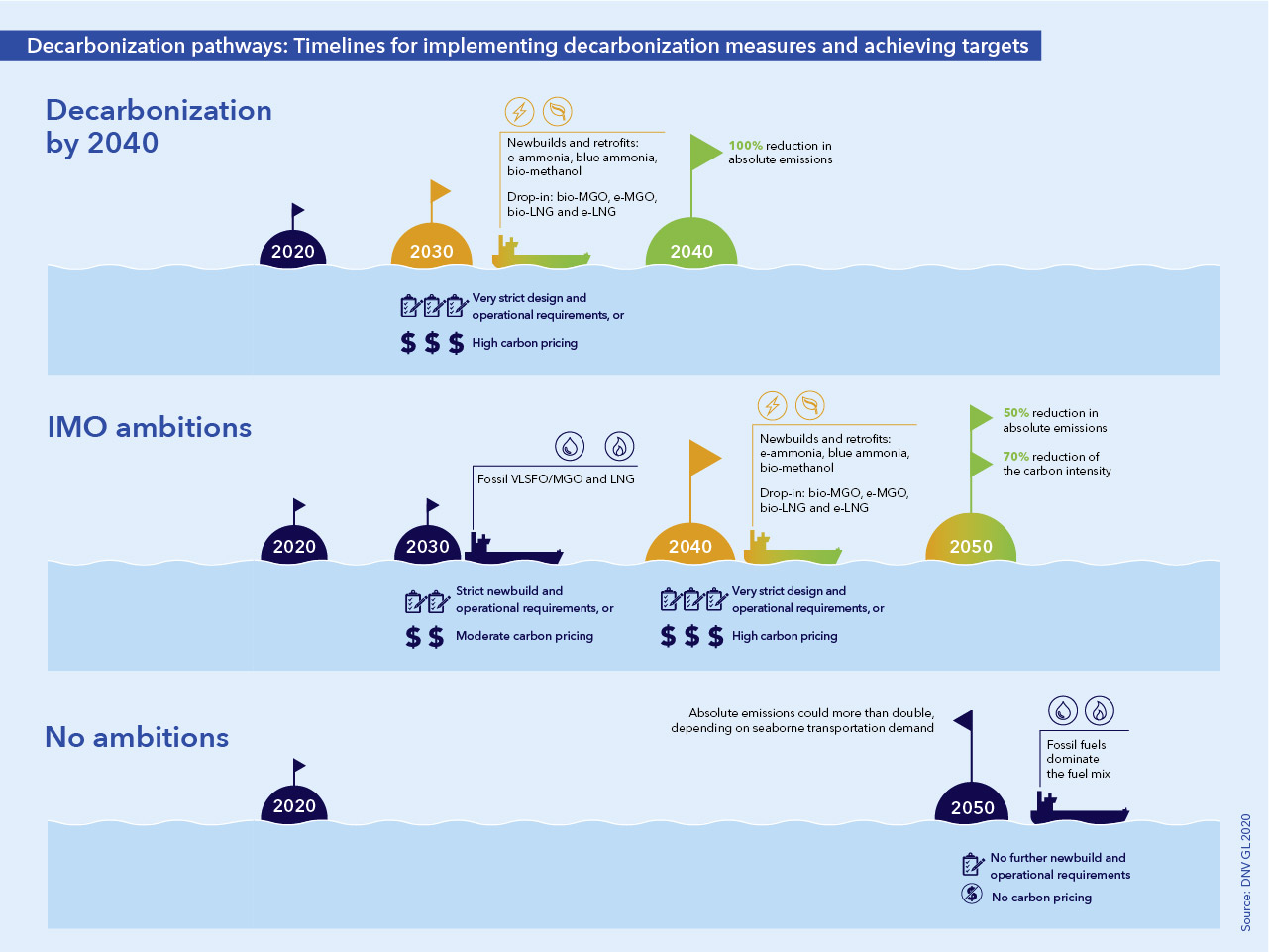 To model fleet-wide effects, we use an updated version of our GHG Pathway Model, a flexible modelling tool for assessing alternative fuels, fuel systems and engines for maritime decarbonization. Choosing the wrong fuel solution and technology today can lead to significant competitive disadvantage later.

The pathways where shipping decarbonizes see significant fleet-wide uptake of at least three or four different carbon-neutral fuels by 2050, accounting for 60% to 100% of shipping energy use in mid-century.

Fossil LNG initially gains a significant share in IMO ambitions scenarios. As regulations tighten in 2030 or 2040, depending on the decarbonization pathway, we see bio-MGO, e-MGO, bio-LNG and e-LNG used as drop-in fuel for existing ships and bio-methanol, blue ammonia and e-ammonia for newbuilds and some retrofits.

In Decarbonization by 2040 scenarios, instead of a transition via LNG, the fleet shifts directly to carbon-neutral methanol or ammonia, with bio-MGO and e-MGO as drop-in fuels for existing ships.

“It is difficult to identify clear winners among many different fuel options across all scenarios,” Longva points out. “However, e-ammonia, blue ammonia and bio-methanol frequently model with a high market share in the decarbonization scenarios and are the most promising carbon-neutral fuels in the long run.” 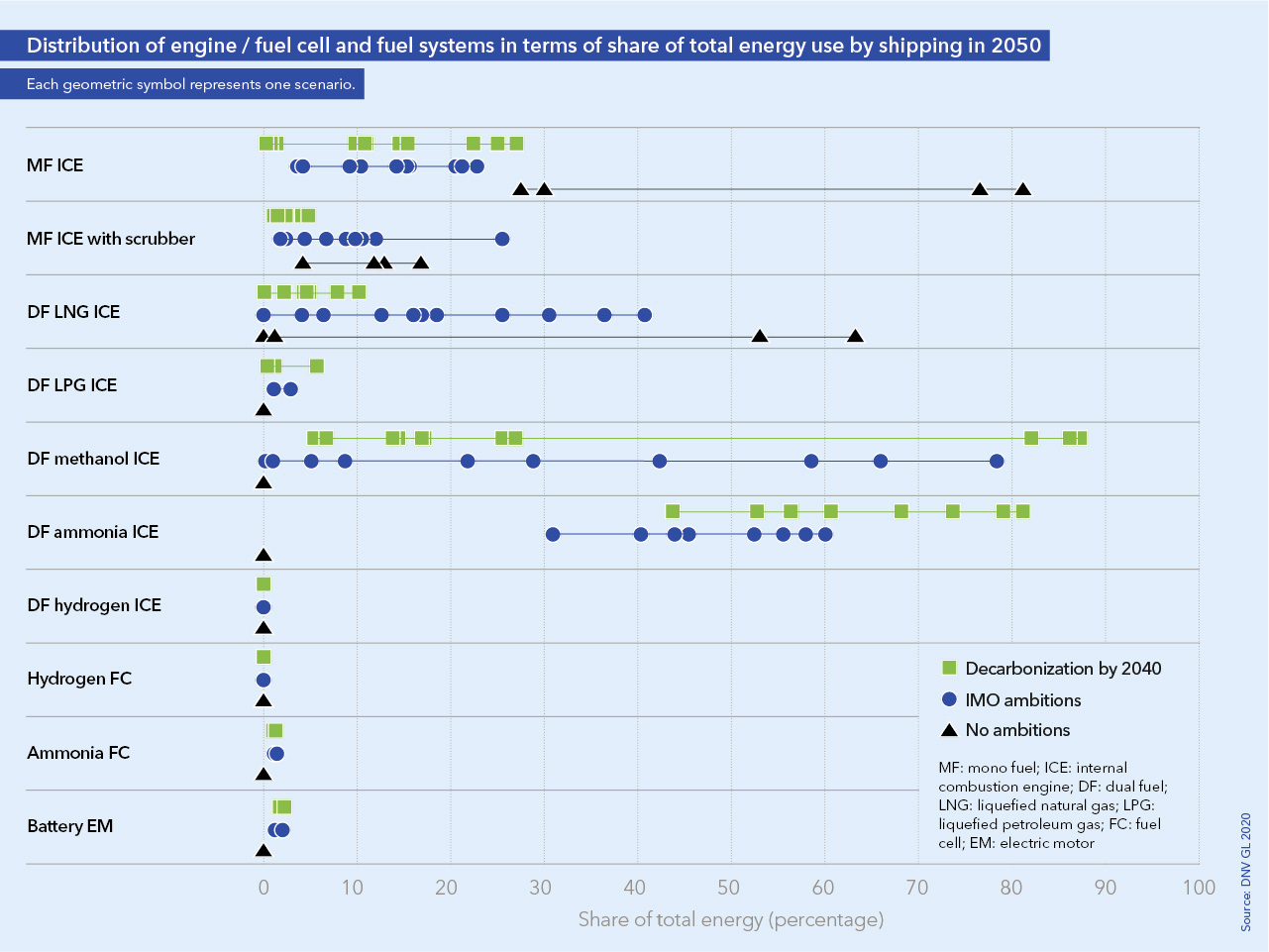 Fuel flexibility and alternative fuel-ready solutions can facilitate the transition from conventional fuel oils, via fuels with lower carbon footprints, to carbon-neutral fuels. Dual-fuel LNG engines gain a significant share in the modelled decarbonization pathway based on IMO’s GHG reduction ambitions. In this pathway, many ships retrofit to methanol or ammonia engines and fuel systems towards 2050.

Our modelling of a case study involving a newbuild Panamax bulk carrier shows that installing a dual-fuel LNG engine and fuel system is consistently the most commercially robust choice. The dual-fuel LNG engine wins out as it can run on cheaper LNG. It also has 20 to 25 per cent less tank-to-wake CO2 emissions, a significant benefit for complying with increasingly stringent regulations on these. In addition, LNG engines and fuel systems are flexible in terms of future fuel options, including setting aside space for fuel storage tanks and potentially reusing them.

Hydrogen can be a building block of shipping decarbonization

Hydrogen use as ship fuel is small today but starting to gain traction in segments such as small ferries. Our forecasts show very limited uptake of liquefied hydrogen as a fuel in any scenario given our assumed fuel prices and capital investment costs for the engines / fuel cells and fuel systems. Hydrogen’s comparatively low energy density per unit of volume means controlling and managing it under high pressure to liquefy at very low temperatures. Hence, the on-board storage of liquefied hydrogen lead to significantly greater capital costs and space implications, than for other ship designs that we have considered. This does not mean, however, that we cannot see the use of hydrogen fuels in niche applications such as hydrogen-fuelled ferries and cruise vessels, and in specific locations.

Note also that hydrogen plays an integral role as a building block in the production of several carbon-neutral fuels, such as blue ammonia, e-ammonia and e-methanol.

Alongside primary energy prices, regulatory policies are the key driver in the industry’s uptake of carbon-neutral fuels and of the future fuel mix. “The model confirms that a clear, robust regulatory framework is needed to ensure global availability of large volumes of carbon-neutral fuels and their safe use, and to incentivize their uptake while retaining a level playing field,” Longva underlines.

The speed of transition to carbon-neutral fuels will have major strategic and financial implications for both the shipbuilding value chain and the land-based fuel supply chain. Hence the need in the current decade to start developing a supply of carbon-neutral fuels in major ports, in addition to on-board solutions and corresponding regulations. 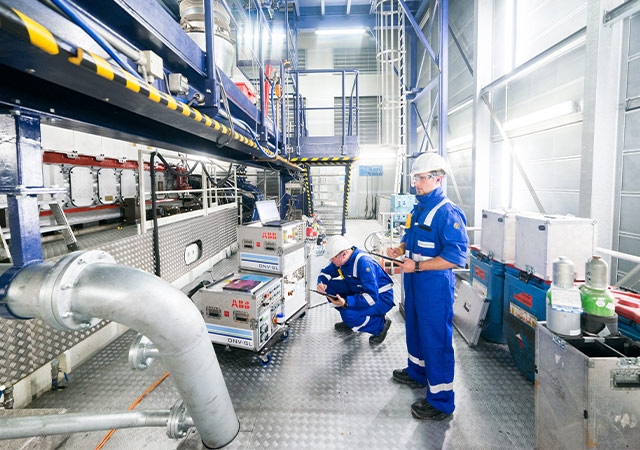 Within each pathway we also explore uncertainty along seaborne trade demand. While Maritime Forecast to 2050 is based on and concerned mainly with long-term trends between now and 2050, there is no denying that the COVID-19 pandemic is having a dramatic, and hopefully short-term, effect on many economic activities, including maritime.

These effects are captured in Energy Transition Outlook 2020, DNV GL’s fourth annual modelling of how the global energy system will evolve between now and mid-century. We estimate that total demand for seaborne transportation will decline by approximately eight per cent in 2020. For maritime trade, the negative effect of COVID-19 varies between cargo types. We assume a gradual recovery to the previous long-run norm for growth rates in seaborne transportation. Because manufacturing is typically more affected in an economic downturn than the economy as a whole, seaborne trade of manufactured products and base materials is usually at risk of greatest decline. The construction of commercial and residential buildings as well as vehicle manufacture will decline by almost a quarter in 2020, so related shipping sectors will be hit hard. Some sectors will rebound to higher than former growth rates after 2020 before settling down later.

“For shipping in general, the wide ranges of uncertainty on energy prices, demand growth and regulatory options raise the stakes for a shipowner choosing between options for future-proofing a vessel to remain carbon-robust,” Longva concludes.

Download our brochure to learn more about our services. 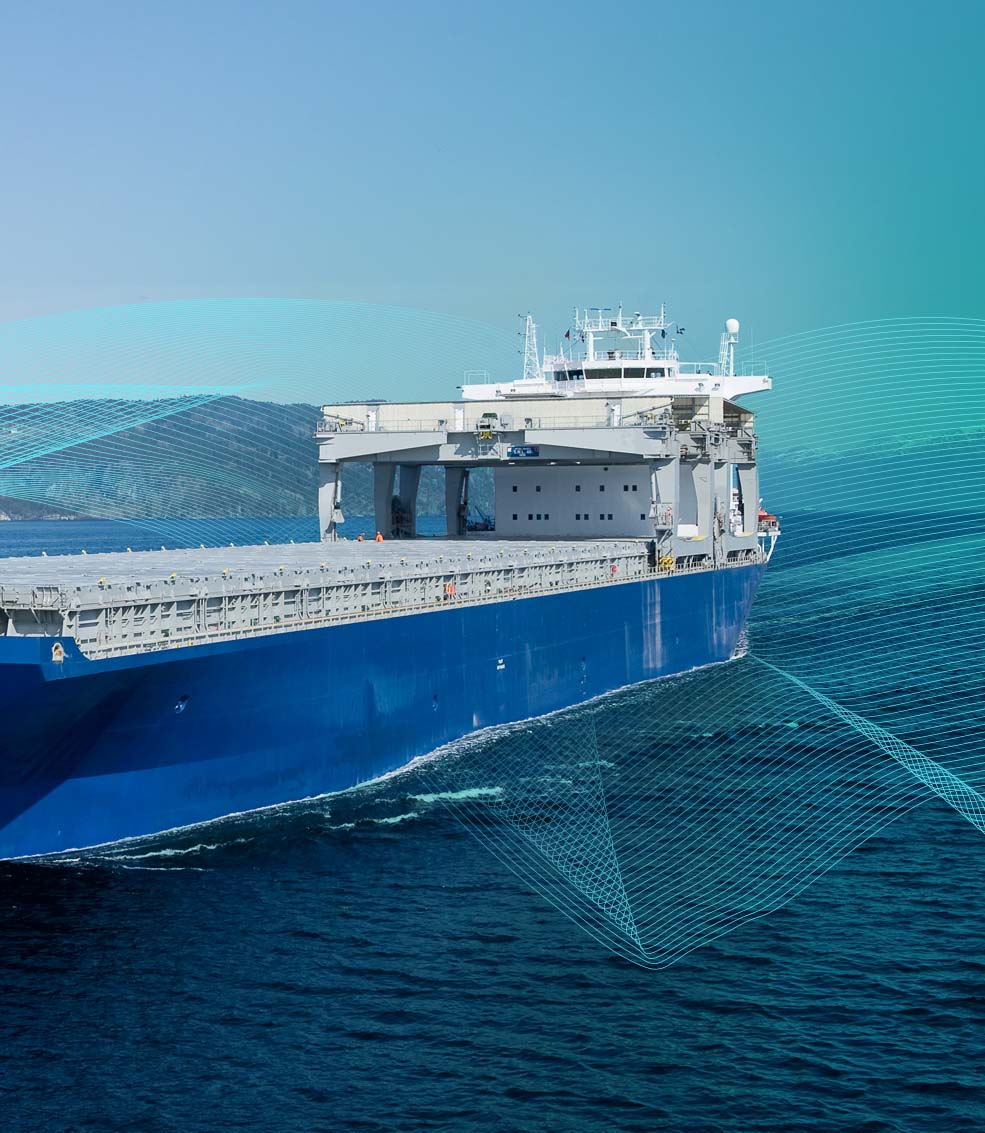 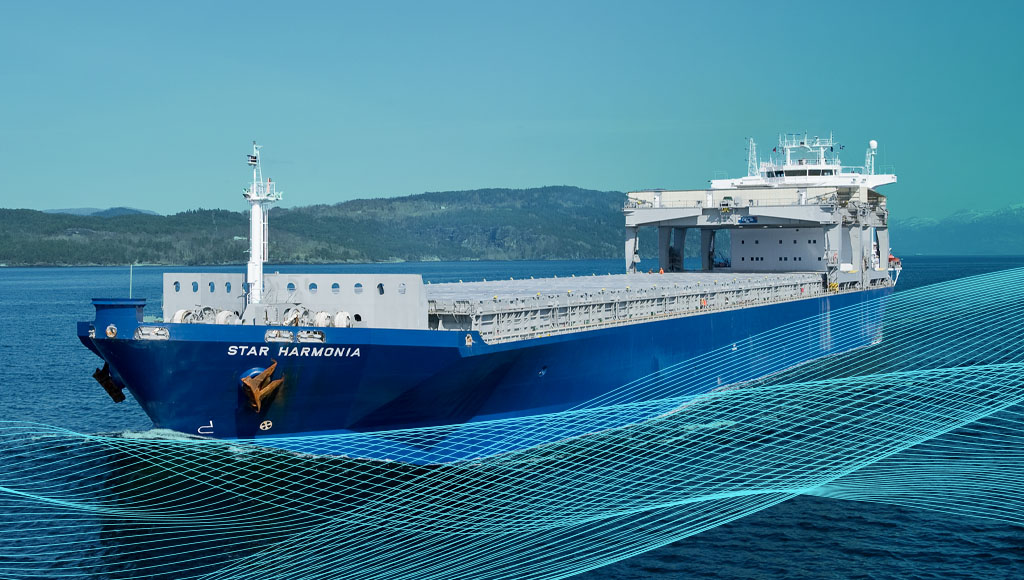 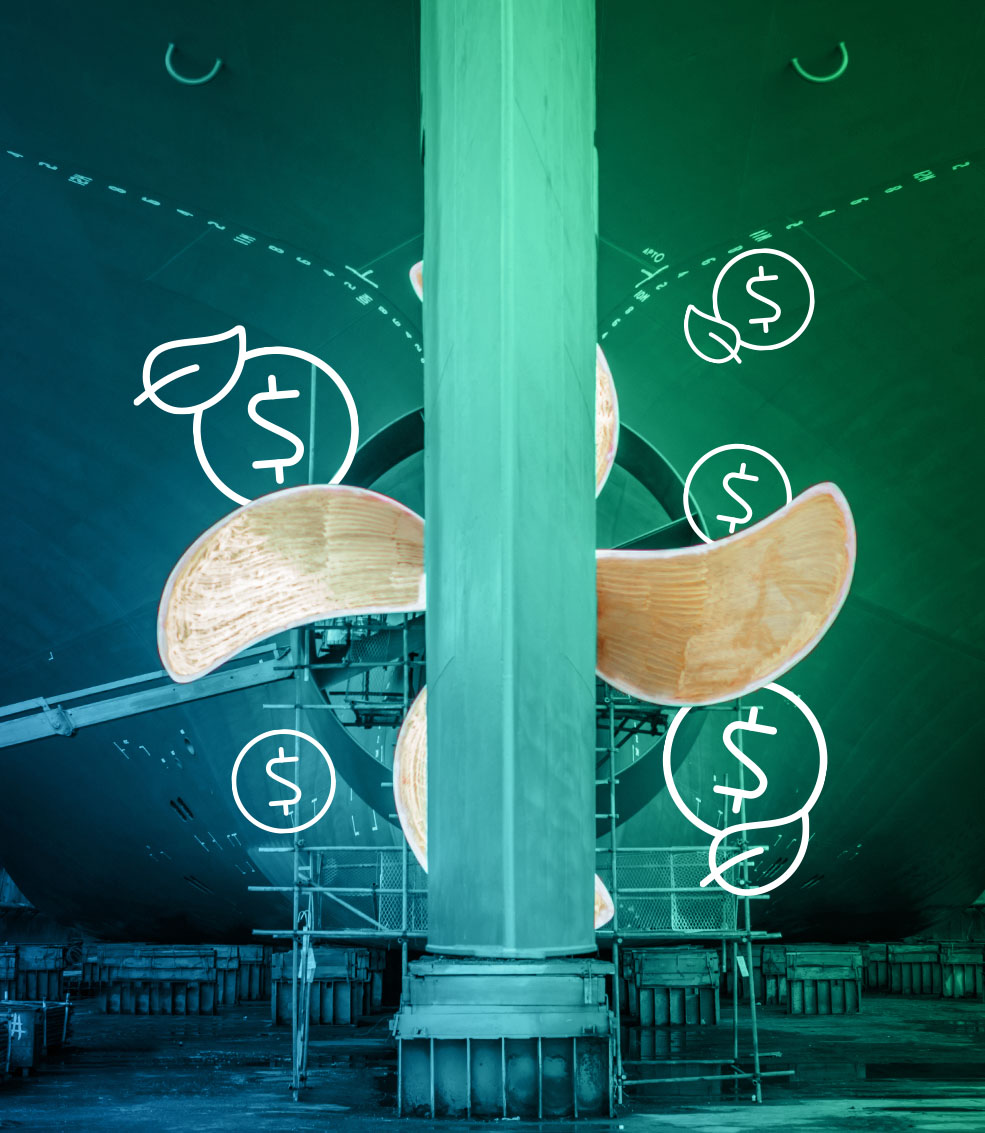 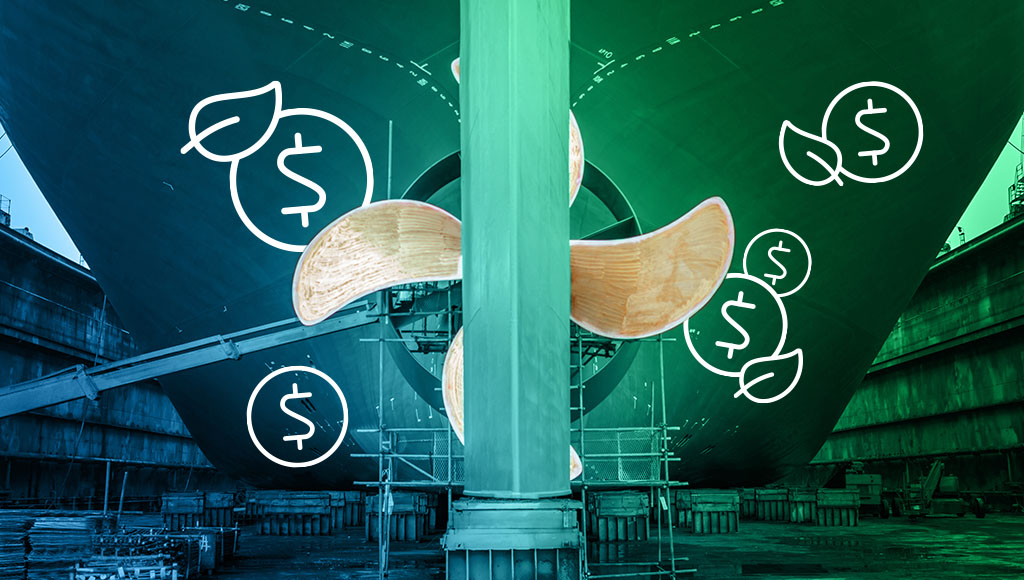