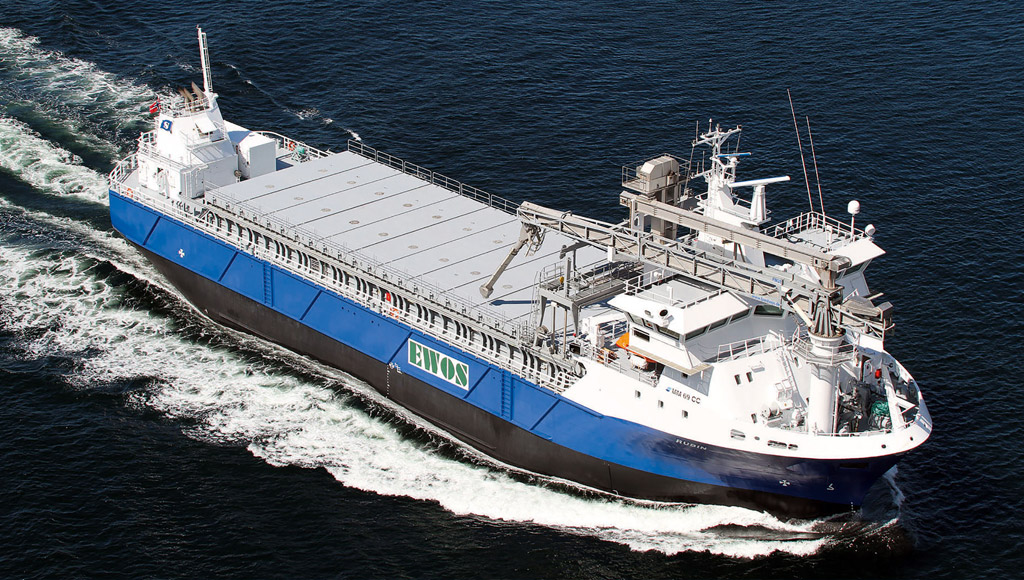 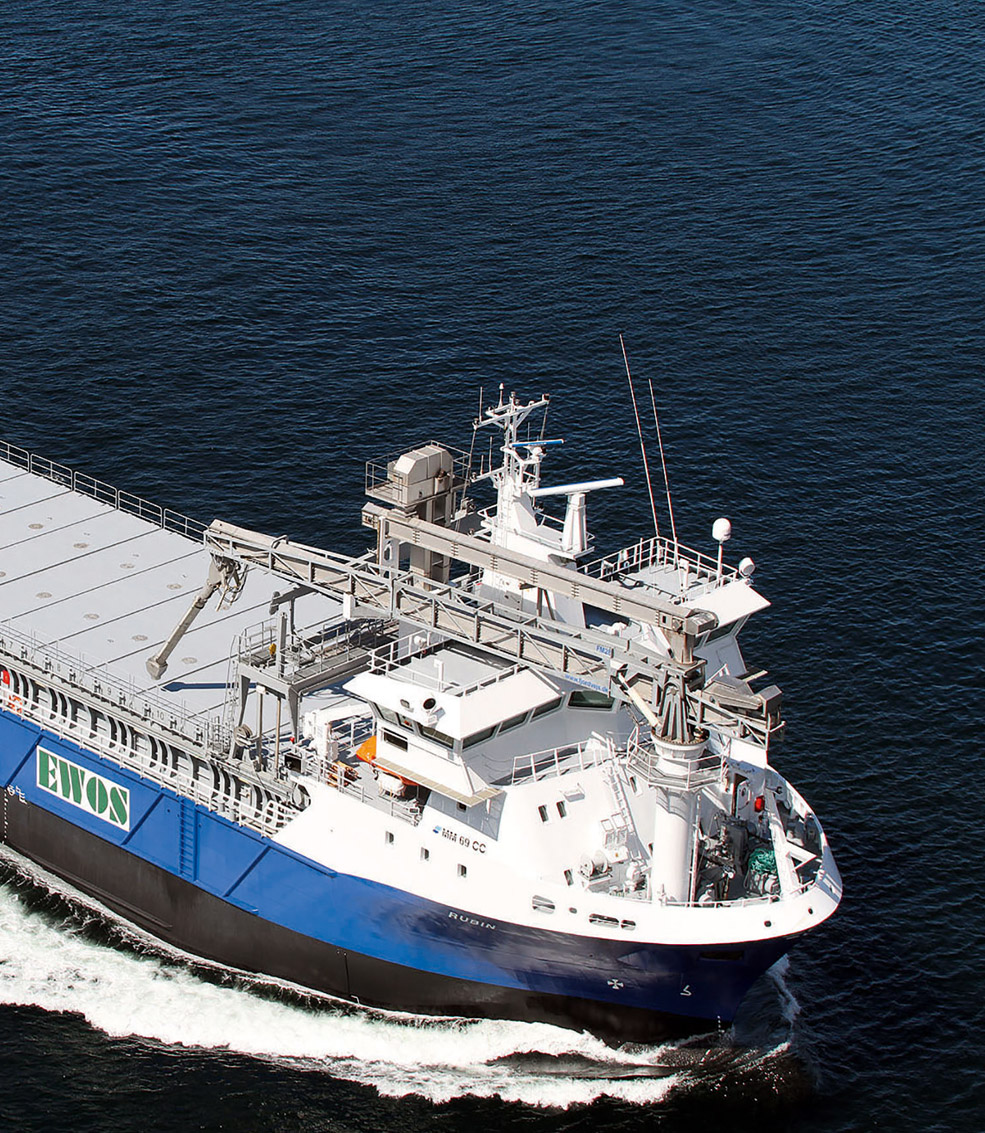 With a high average vessel age and tougher challenges to operate than ever, the coaster segment has some catching-up to do. Developing the right design for needed newbuilds is a key success factor.

With almost 10,000 vessels in service, the coaster segment is by far the largest subcategory of the MPV segment, which comprises 15,000 ships in total. Comparatively small in size, these ships can carry up to 5,000 dwt according to the DNV GL deﬁnition, and are typically deployed on local trade routes. They account for roughly 66 per cent of all MPVs, but only for 23 per cent of the segment’s tonnage. Their average age is 27.5 years, while geared coasters are more than 39 years old on average, which means many ships are outdated both technically and in terms of performance. There is an urgent need for ﬂeet renewal. Higher expectations from transport customers and tougher regulations such as those concerning ballast water management are increasing the pressure on owners to invest. “Installing a ballast water treatment system on a coaster can easily cost 300,000 euros to 400,000 euros, almost half of what a 20-year-old coaster is worth,” says Jost Bergmann, Business Director MPV at DNV GL.

Such an investment does not make sense for an older ship, not to mention the challenge of ﬁnding sufﬁcient space in the conﬁned engine room to install the required equipment, and providing enough electrical energy to power the additional system. This means that retroﬁtting these older vessels often involves all kinds of compromises. As a consequence the ship may end up wasting time with ballast treatment operations, having to sacriﬁce ﬁve or six voyages per year that would have earned its owners money. In view of all this Bergmann doubts that the current order book for this class, which lists 78 ships or approximately 0.8 per cent of the ﬂeet, is all the industry can expect. “There is an urgent need to replace ageing vessels. But as long as freight and charter rates remain at the current low level, owners will hold back on new orders, not least because ﬁnancing them hasn’t become any easier.”

As in all MPV categories, the design of a ship is determined by its future operating proﬁle, cargo proﬁle and operating area. Coasters operate primarily in coastal waters, as their name suggests. Since they frequently enter fjords, rivers and canals, their main particulars must account for the resulting limitations in addition to efﬁciency criteria. This mainly affects their draught but also their length and breadth.

Designs for smaller ships must strike the right balance between compactness and cargo capacity since the minimum crew size and outﬁtting requirements as well as the pilot, port and tugboat fees are major cost items inﬂuenced by the main particulars and tonnage.

Furthermore, the combination of main dimensions and hull form has a major effect on the required propulsion power and hence, fuel consumption. Accounting for the expected operating parameters (speed and draught distribution) is of paramount importance during the design process to make sure the required engine power output can be minimized, which will determine the ship’s fuel economy and operational expenditures (OPEX). “In conﬁned, heavily frequented operating areas, good manoeuvrability is a key asset,” says MPV expert Bergmann.

Generally, he strongly advises designers of newbuilds to include foreseeable trends into their considerations at the earliest time possible, especially with regard to cargo streams and types. From lowering operational expenditures to maximizing efﬁciency, it can always pay off to take advantage of DNV GL expertise. Bergmann believes the ability to carry larger quantities of bulk cargo will be important for coasters in future, so an appropriately designed cargo hold will increase ﬂexibility.

Versatility is essential for all MPV categories, including the smallest sizes: from ore to grains, and from wood, steel and paper products to packaged, palletized, boxed or containerized goods, customers’ wish lists contain a great diversity of cargoes. Large, box-shaped cargo holds with movable bulkheads and efﬁcient hatch cover systems, as well as a large deck area for ships intended to carry cargo on deck, are all important criteria. To position themselves as an attractive alternative to their main competitors – road trucks –, coasters must be efﬁcient not only at sea but also in port. Fast and ﬂexible loading and unloading operations enabled by optimized hatch cover designs and handling systems, as well as rapid, effective cargo hold cleaning are major advantages. 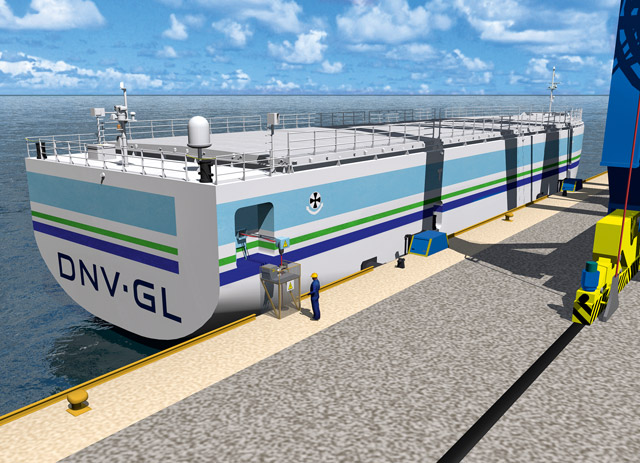 The DNV GL project ReVolt, a concept design for an all-electric, autonomous coaster, has been greeted with great interest.

There are various options regarding future propulsion energy sources: because of the strict environmental regulations in effect in ECAs, diesel (MGO) has fully replaced HFO in northern European and North American waters. Since ships travel at relatively low speeds, and coasters rarely cover very long distances, LNG might be considered rather an attractive ship fuel because the quantity of fuel needing to be bunkered is comparatively limited. Containerized tank systems could be a cost-efﬁcient and ﬂexible bunkering solution in terms of LNG tank arrangements, construction and bunkering infrastructure. Development and testing of related technologies has started and will be available on a larger scale soon.

“We are currently discussing hybrid solutions incorporating batteries with our customers, and not only for coasters,” says Bergmann. Combined with a shaft-driven generator and motor, or a diesel- or gas-electric propulsion system, battery packs on board can enable ships to operate in electric-only mode in regions that are especially sensitive to emissions, or to power their electric systems emission-free when in port. The batteries could then be recharged while operating on the open sea, or through a cable connection by shore power while in port.

The right choice of fuel and propulsion concept makes sure all regulatory requirements are met and the ship can operate in a cost-efﬁcient manner. What is more, it will satisfy cargo owners’ increasing interest in a sustainable logistics chain.

Sometimes desired investment cannot be made because the commercial or political conditions are not totally clear when ordering a newbuild. However, ignoring opportunities may backﬁre in the future – this is where the “Ready” concept offered by DNV GL comes into play: “Ideally, newbuilds should be designed to allow retroﬁtting LNG systems or battery packs at a later time without having to make any major modiﬁcations,” says Bergmann. “This maximizes investment value while leaving the options open for future developments.” 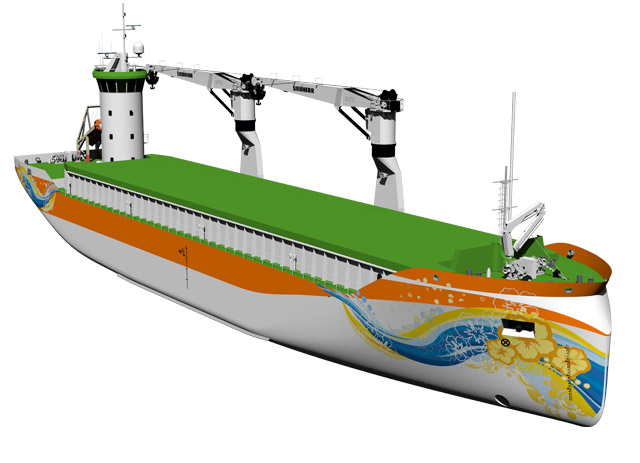 Working towards the fully automated ship

Apart from fuel, personnel is the most important OPEX factor. Simpliﬁed propulsion concepts and smart technologies can increase the degree of automation, for example to beneﬁt from a reduced maintenance effort in the engine room. Jost Bergmann expects the most signiﬁcant progress towards autonomous shipping to occur in the coaster segment: “Depending on the degree of automation of on-board machinery, we will probably see remotecontrolled ships eventually, and in the long term even fully automated vessels on sea legs. The crews needed for berthing and mooring off as well as for cargo operations would then go aboard and come off together with the pilot.”

Coasters would be an ideal ship type for this technological development since operating in coastal waters, they would always be within reach in an emergency. “True fully automated operation will not be realized until there is sufﬁcient experience in these ﬁelds,” says Bergmann. Much attention has been given to ReVolt, a DNV GL study into a fully electric autonomous coaster design for short-sea shipping that demonstrates the future potential of this concept.

Future newbuilds will have to differentiate themselves from the existing ﬂeet, not only by being more efﬁcient and sustainable, but increasingly by making an aesthetic difference as well: “In this highly competitive market, shipowners want their vessels to be conspicuous, so it won’t hurt if they look good as well,” says MPV expert Bergmann. With attractive colour schemes, preferably predominantly green, as well as unusual deckhouse contours and bow shapes, there are all kinds of ways to enhance the looks of the ship beyond its pure functionality.

The biggest competitor of short-sea shipping, land transport by truck, has major disadvantages regarding its environmental impact. Like many other industry stakeholders, Jost Bergmann says he would like to see politics taking a more active role in this respect: “Truckers and hauliers have a pretty strong lobby; but in terms of emissions per unit of cargo transported, shipping is much more eco-friendly.” The European “Road to Sea” initiative has not really achieved much in this respect, he adds. By comparison, the Norwegian NOX fund, which provides support for investments in eco-friendly ships, is a truly progressive initiative, says Bergmann.

The transport market continues to be challenging for coasters, those small multitalents. Only a ﬂeet of state-of-the-art, ﬂexible and efﬁcient ships will make a difference.

Don´t be left out. Join the many others and sign up today to receive the latest insights 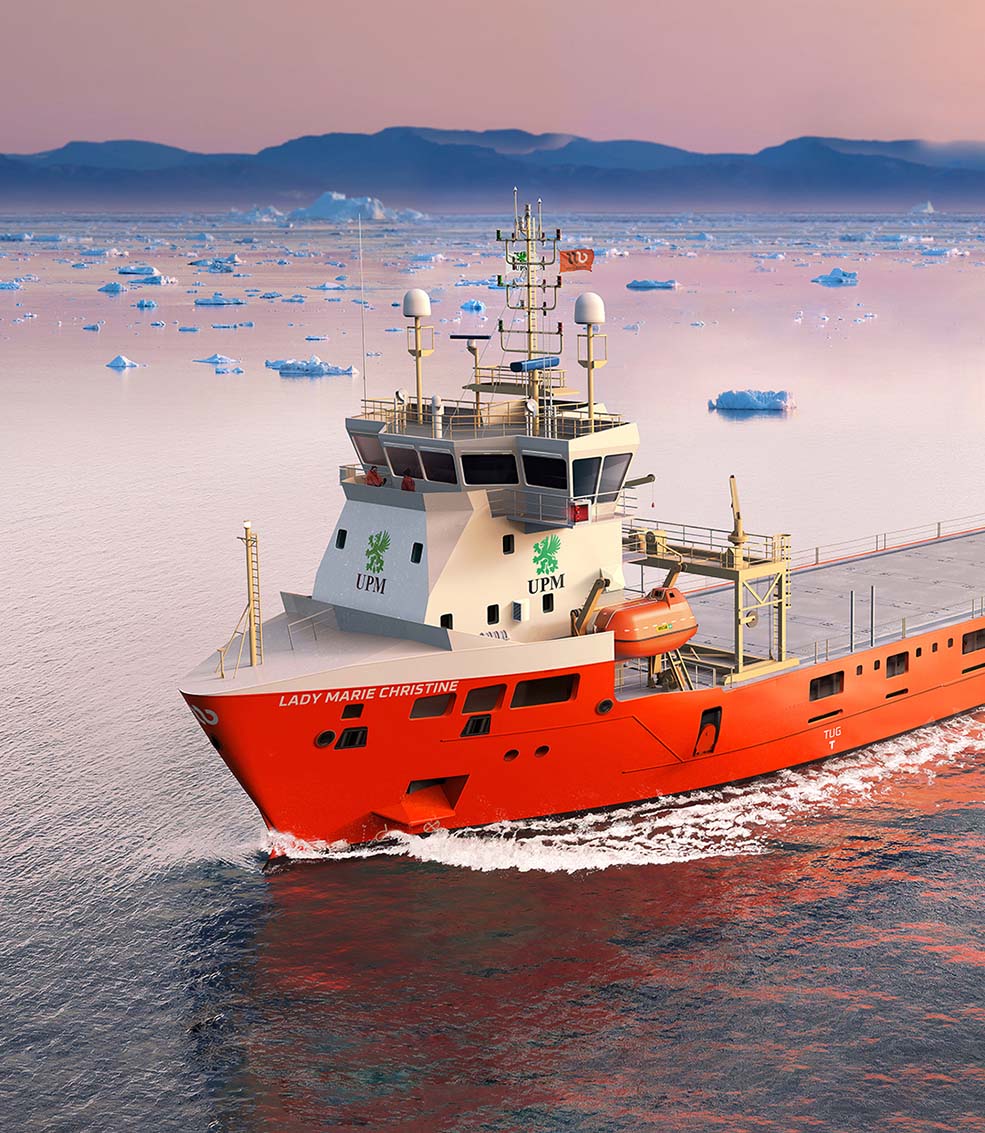 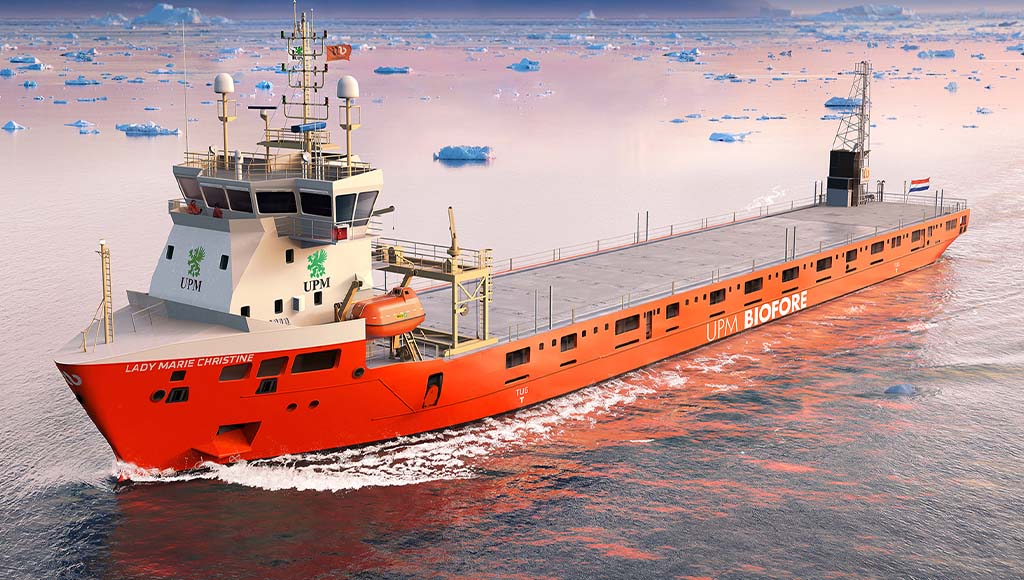