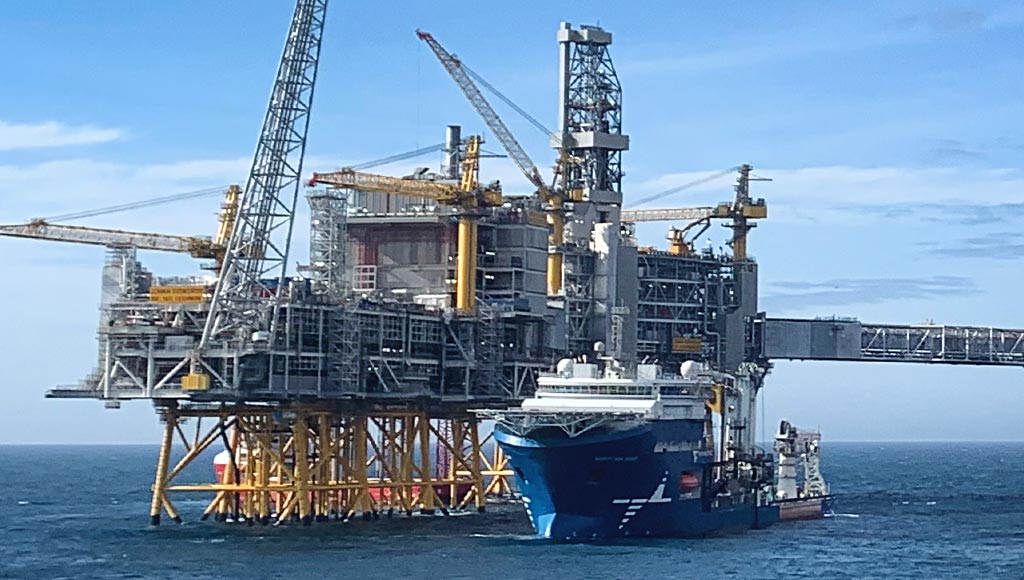 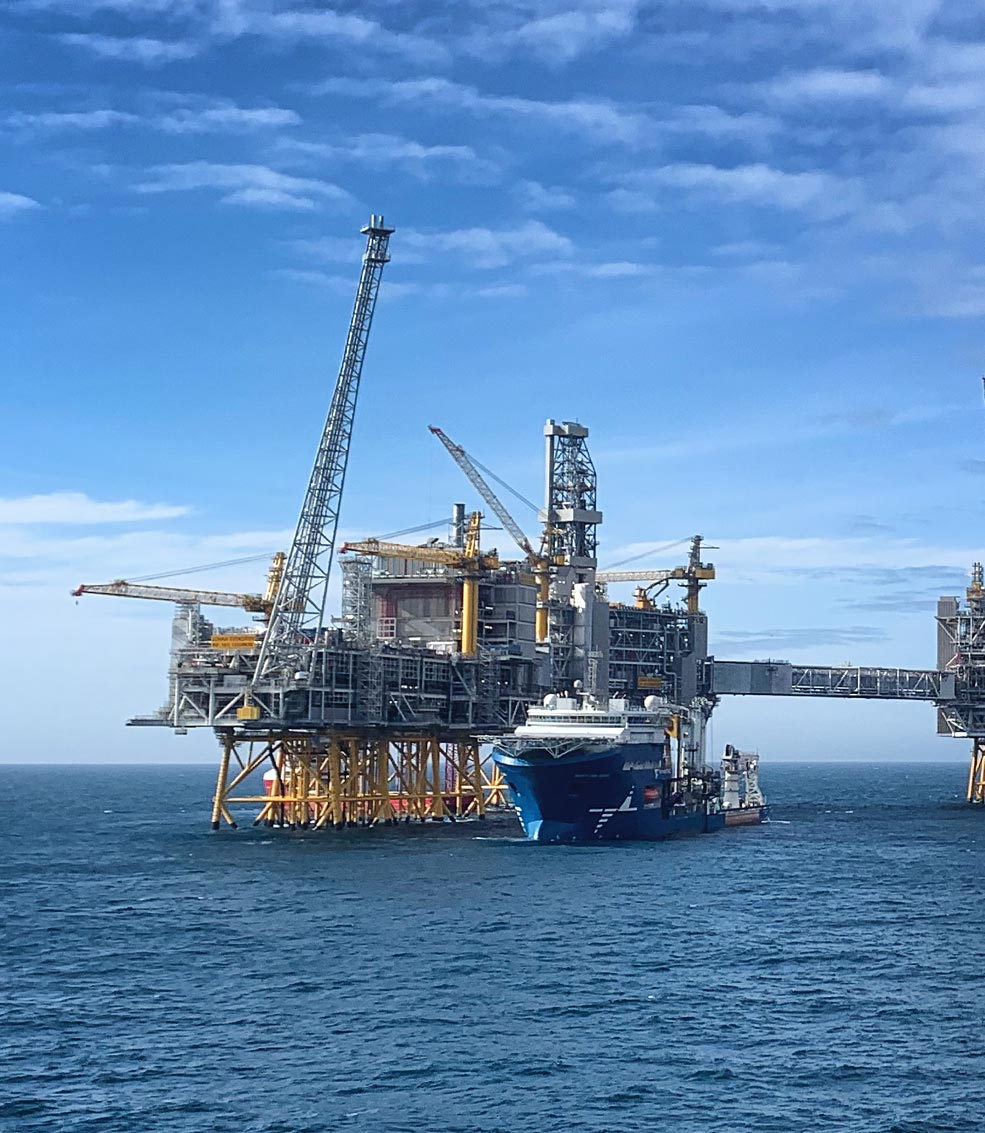 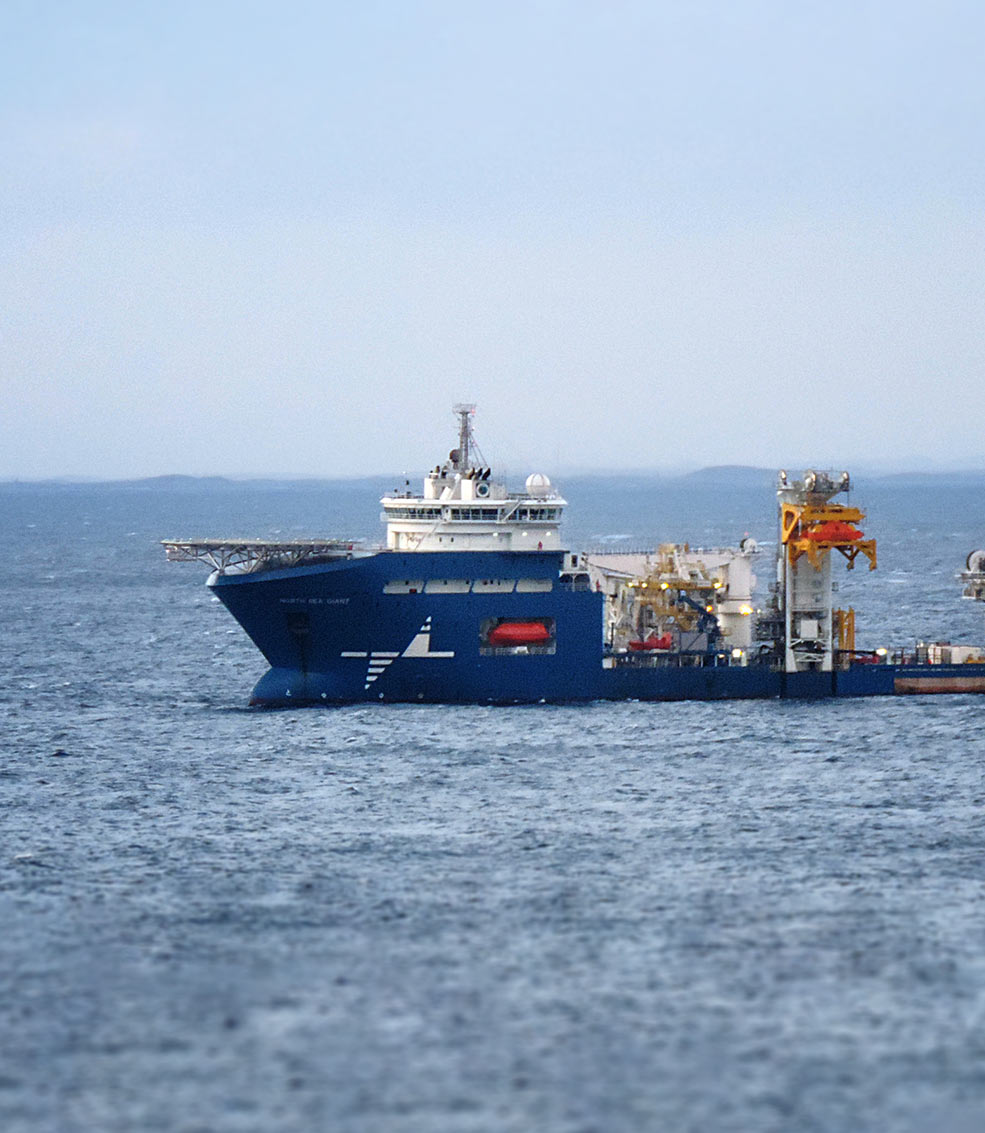 When North Sea Giant was delivered to her Norwegian owner, North Sea Shipping AS, in 2011 she was the world’s most advanced offshore construction vessel. After an upgrade including the installation of triple-redundant battery banks she can claim that title again.

“She does all the high-end work, like spool installation and umbilical work,” says Sveinung Økland, Operation Manager at North Sea Shipping, about his company’s flagship. “She can install very large subsea components, and because of the large deck space she can perform two to three different tasks during a single deployment.” In 2011, the year of her delivery, the ship won Offshore Support Journal’s “Vessel of the Year” award.

A number of additional features make her special, not least the sophisticated DP3 dynamic positioning system and propulsors that allows her to maintain her position with high accuracy even in harsh and challenging weather conditions, says Arnstein Eknes, Segment Director, Special Ships at DNV GL: “This is necessary because of the sophisticated subsea installation and maintenance work the ship has to perform, such as pipe-laying, installing subsea stations, or hyperbaric wet welding.” To make sure no technical failure on board will disrupt this work, the ship has triple redundant power systems, including a total of six diesel generators.

In dynamic positioning (DP) it is important for these redundant power groups to be fully segregated, explains Henning Revne, Technical Manager at North Sea Shipping. “That is the challenge on these vessels: since you don’t have a connection between the redundancy zones, you need to have a power source within each group, which means that you run multiple diesel engines at the same time.” In the ship’s original configuration, this meant that at least two or three of the diesel generators would be running constantly during subsea operations to provide the necessary backup power, consuming large amounts of fuel.

Since the ship was first delivered, market conditions in the oil industry, customer expectations and environmental requirements have changed significantly. Competitors began building similar vessels. Eventually North Sea Shipping decided to restore the vessel’s competitive position, especially with regard to operating costs, by giving it an upgrade. “North Sea Giant was an excellent ship to begin with, also with regard to its DP system, and we recognized that it had huge potential if we installed batteries and enabled it to save fuel,” says Operation Manager Sveinung Økland. “We looked at the OSV market where battery systems used for peak shaving produced good results; our ambition was to go beyond that by utilizing hybrid technology to save a lot of fuel and reduce the number of running components on board. As we started the project we realized that to fully utilize the potential of a hybrid installation we would need sophisticated technology to ensure smooth failover when needed.”

The resulting project was therefore much bigger than originally thought – the owner’s biggest investment ever that was not for a newbuild. “But since this is a big vessel, the potential benefits of a hybrid system in terms of fuel saving were also much greater than on an average OSV.” 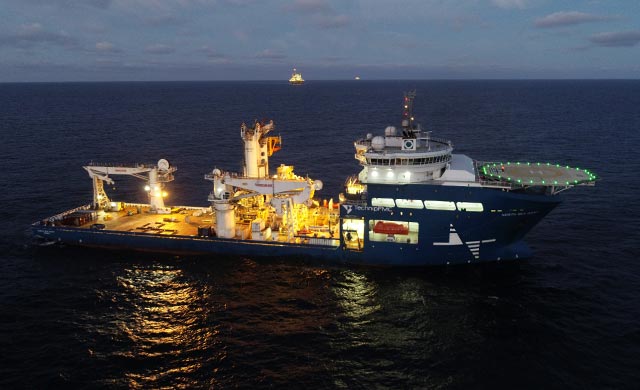 Because of her size and power system, North Sea Giant can perform several different jobs in a single deployment.

Batteries can significantly reduce fuel consumption: once they are fully charged, they are ready to supply power at any moment without consuming energy while idle, as opposed to a genset running in standby mode. In the event of an engine failure, a switchover mechanism must instantly bring in one of the redundancy groups until another generator has been started up and reached full operating speed.

Following careful planning, the retrofit was carried out Aibel-Storesund shipyard. Wärtsilä was the system integrator and had overall responsibility for the delivery of the hybrid system. Corvus Energy supplied the batteries, and Power Electronics supplied the crucial switchover system, so-called open bus-tie breakers installed between the switchboard sections. These bus breakers are normally open. “The AC power switchboard is segregated but the systems are tied together on the DC side with electronic bus-link breakers, which respond much faster than mechanical ones, ensuring practically interruption-free failover,” explains Henning Revne. “These switches were custom-developed for this project. Our ship is pioneering this technology.”

Some modifications were necessary on board to make space for three separate battery sets. “Space was a challenge,” says Sveinung Økland. “But the vessel had been designed to allow the installation of an enlarged moon pool, which was never done. This space was adjacent to the existing switchboard room, so we built the three battery rooms in that space. The remaining components were fitted into the existing switchboard rooms. We also had to replace the existing transformers with new ones because we didn’t have space for an additional one.”

“The preparation, adaptation and integration of these battery systems was a very complex task that took some time, and predicting all the consequences of adding such a power source can be difficult,” reports DNV GL’s Arnstein Eknes.

The North Sea Giant upgrade coincided with the development of a new class notation by DNV GL that accounts for the advanced capabilities of enhanced reliability and closed-bus-tested dynamic positioning systems. North Sea Giant was the first ship to obtain the DynPos AUTRO(ER)(CBT) notation, which confirms the vessel’s ability to perform complex operations safely with assured power available at all times, even in rare case of two successive failures. The switchover is so smooth that nobody on board will notice it except the watch officer when a notification message appears on the display on the bridge, says Henning Revne.

As an added benefit that greatly enhances the competitiveness of the ship, North Sea Gian can perform the same operations as before with the same redundancy ‒ with only one engine running, highlights Revne. “Our customer, the charterer, benefits enormously because they pays the fuel bill. We also save about one third of the diesel engine running hours, which substantially reduces maintenance costs. Our company benefits from that through lower OPEX.”

Kristin Eide, Principal Surveyor and expert on electrical systems at DNV GL, says taking part in this project was both a challenge and a source of great satisfaction: “Validating what is installed and making sure the systems work as intended can be tough in an advanced upgrade. Integrating control systems is complex, so it was great to work with a competent team from the key vendors and the owner when verifying the system. While it is our job to identify problems and keep track of what remains to be done, it was a pleasure to be involved in this upgrade.”

Sveinung Økland adds: “We believe strongly in this project as one big step into the future. We have to be more effective and green, so this is a big accomplishment. North Sea Giant is far ahead of the competition in terms of fuel efficiency, redundancy and capacity. We are back in the front seat with this ship. The vessel was already the best of its kind when it was delivered in 2011. The upgrade prepares it in an excellent way for at least another decade of advanced offshore work.” 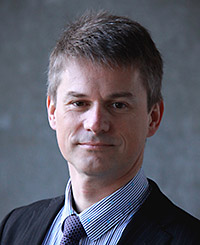 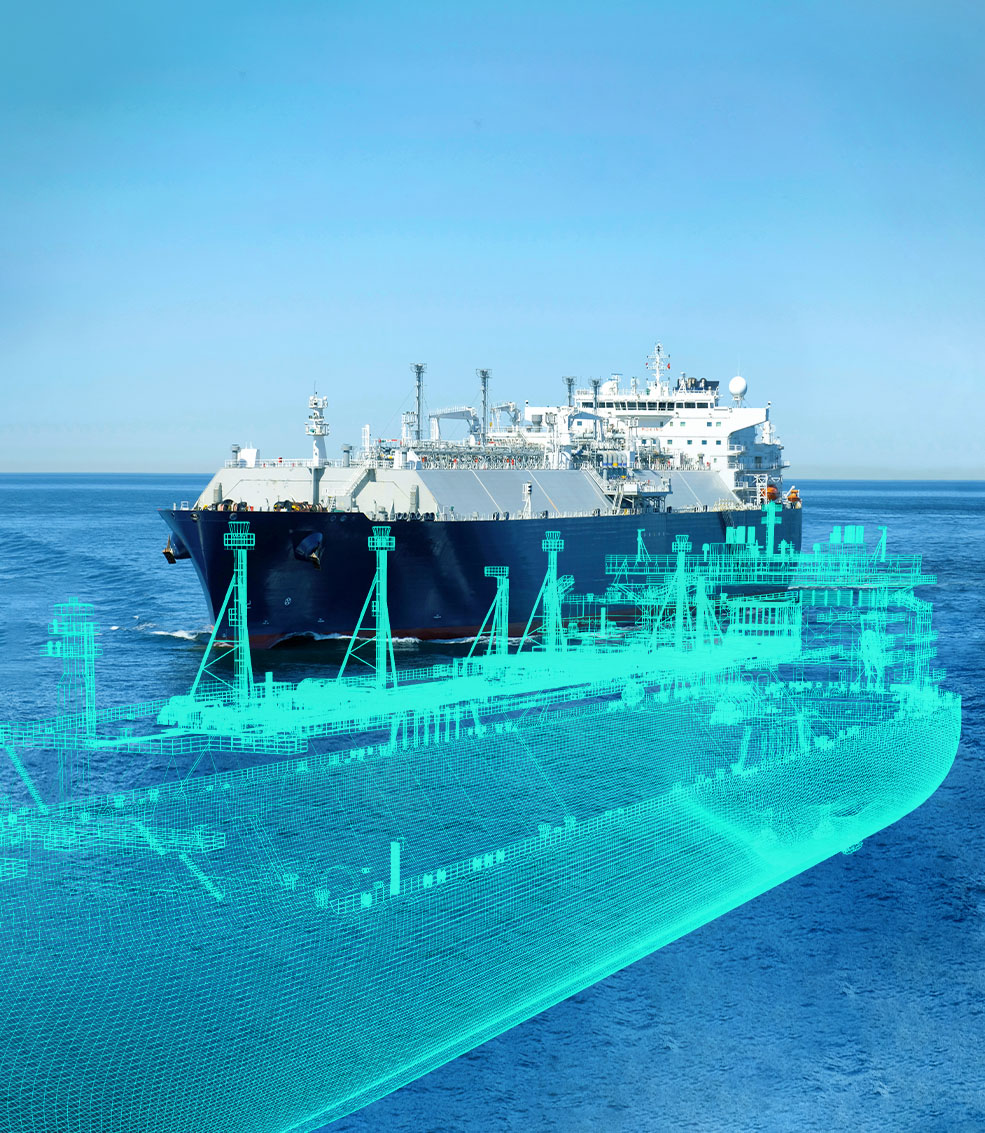 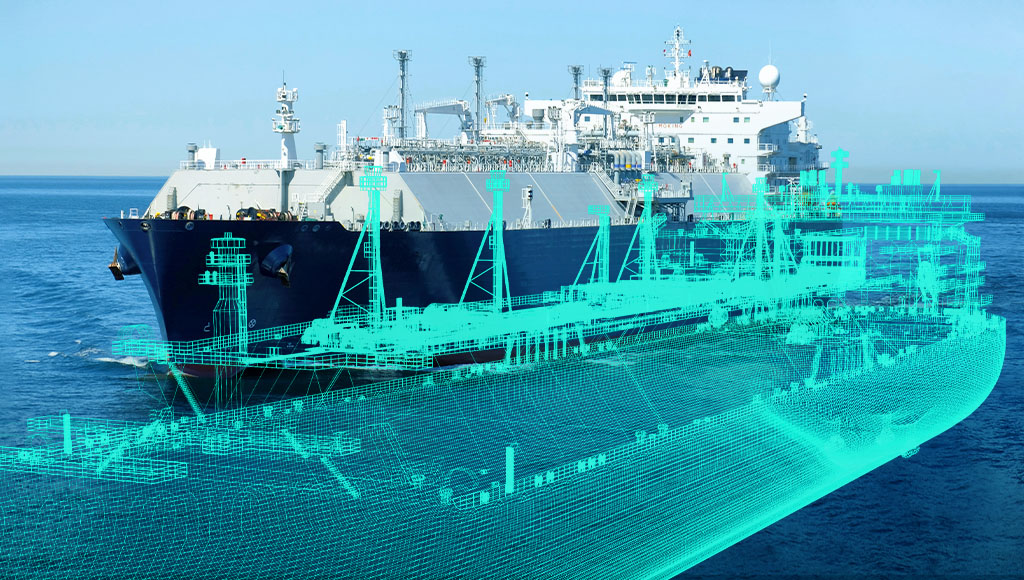