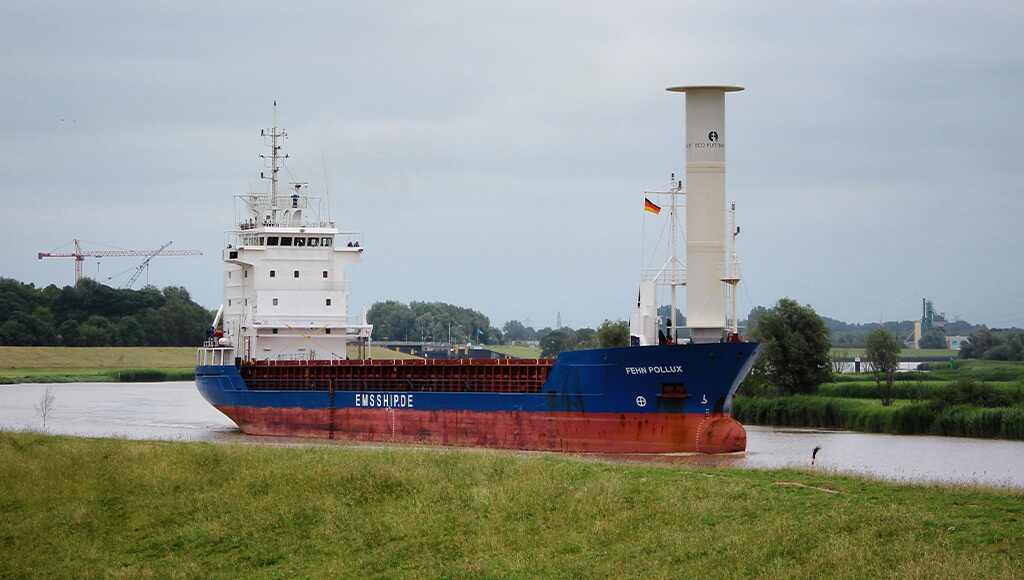 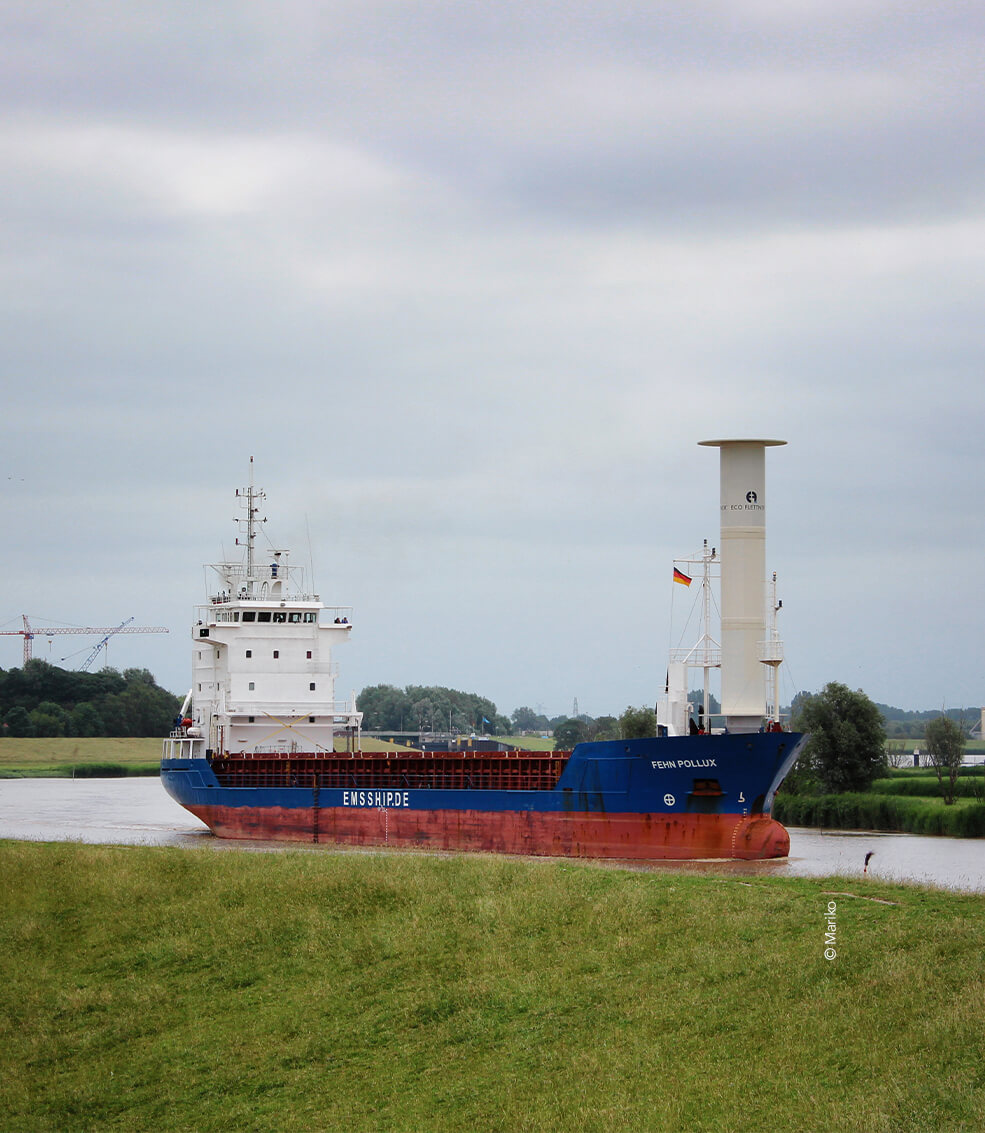 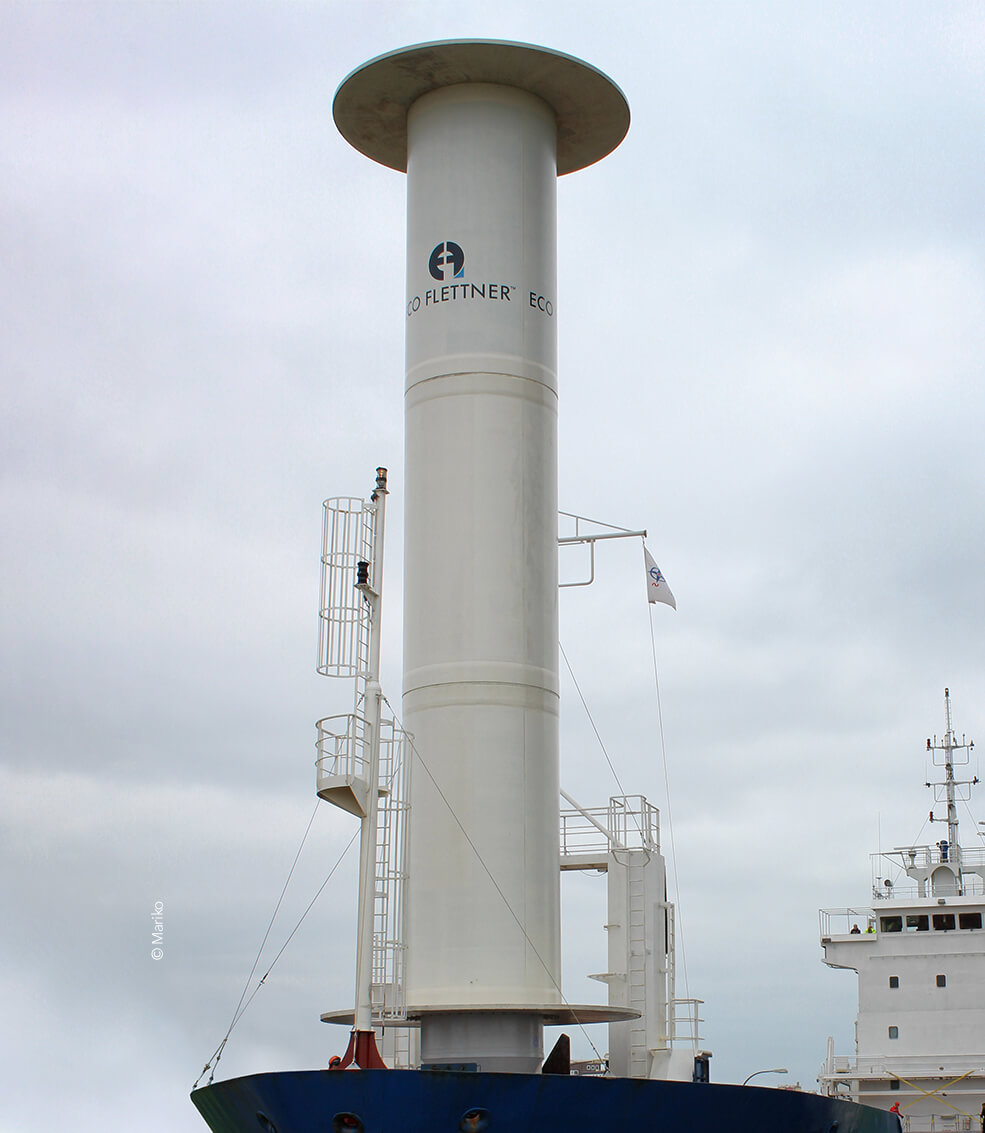 In a project originally launched years ago, a consortium formed by industry partners in conjunction with the University of Applied Sciences Emden/Leer and DNV GL has developed an innovative rotor sail that has proven highly effective and seaworthy, and is ready for commercialization.

After a 100-year pause, wind, an inexhaustible but somewhat unpredictable natural energy form, has grabbed the attention of ship designers again as a potential auxiliary energy source. Wind-assisted propulsion is permissible under existing international regulations, including SOLAS. The most mature wind propulsion technology currently available for commercial shipping is the Flettner or rotor sail, a tall, rotating cylinder which takes advantage of the so-called Magnus effect in the presence of side wind to produce additional thrust forward.

At the end of June 2018, the 4,250-tonne coaster Fehn Pollux left the port of Leer, Germany, for the first sea trial of its newly installed ECO FLETTNER rotor sail. It was the culmination point of a long-term joint project involving several partners from the shipping industry, the University of Applied Sciences Emden/Leer and DNV GL. The MariGreen project is supported by the EU’s Interreg programme for the German–Dutch border region, and coordinated by MARIKO, with the Dutch industry association FME as a co-partner.

The ECO FLETTNER developed for Fehn Pollux represents a complete redesign of the Flettner concept, which was originally invented a century ago. Eighteen metres tall and 3 metres in diameter, it rotates around a stationary mast with bearings at two critical heights. It has many innovative design features, such as lightweight materials, high-performance bearings and the ability to rotate at high speeds.

“We didn’t want to take any chances,” says Ralf Oltmanns of MariGreen, who has been heading the ECO FLETTNER project. “Before installing the rotor sail on board Fehn Pollux, we performed very thorough onshore tests on the rotor technology using both scale models in wind tunnels and the 1:1-scaled rotor sail in the open air. We wanted to be sure that the system was absolutely ready for real-life conditions.” DNV GL approved the ship’s structure and systems to the extent relevant for the installation of the rotor sail. Thanks to careful preparation and planning, building the foundation and mounting the unit on the forecastle of the ship as well as installing the required wiring and control equipment took no more than 20 days. 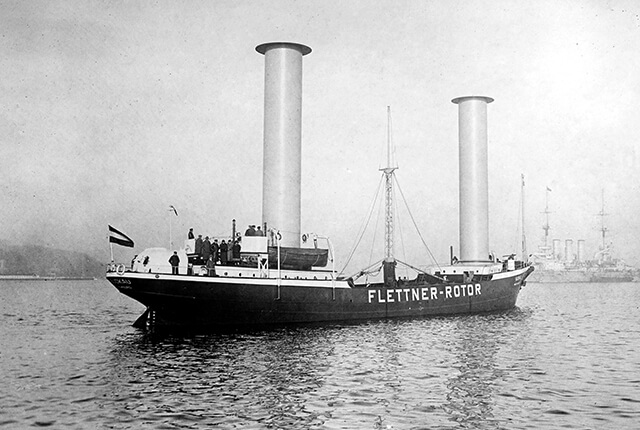 The German schooner Buckau was the world’s first ship equipped with a Flettner or rotor sail. The trials were technically successful but for decades cheap fossil fuels and the absence of environmental concerns made the technology unattractive to shipowners. Now the tide has changed, and advanced technology further enhances the efficiency of rotor sails. (Photo: by Library of Congress [Public domain], via Wikimedia Commons)

The Fehn Pollux rotor sail project is as much a fitness test as it is a scientific experiment. A host of sensors were installed on board that are now gathering large amounts of data to build knowledge about the application of this technology. “Apart from wind and navigational data, we collect information on transmission and bearing oil flow and temperature, rotor vibration, ice accumulation on the rotor, rotational speeds et cetera,” describes Oltmanns.

Understanding and tracking all the monitoring data isn’t an easy task. During the first months of operation, a student from the Emden/Leer University was on board, tasked with observing the rotor system, developing a hardware maintenance concept, training the crew in routine maintenance and data reporting skills, and supervising the monitoring software. “Now the crew is able to perform a monthly inspection routine and prepare the reports independently,” says project leader Oltmanns. “They document every aspect of the system, take measurements and photos, and record observations.” The monthly reports are transmitted to the Emden/Leer University for scientific evaluation.

The painstaking preparations paid off. The rotor sail has been performing very smoothly, says Oltmanns. And it has surpassed expectations. During the first six months of operation the ECO FLETTNER withstood all kinds of stress tests in heavy weather, showing no weaknesses. Fehn Pollux has been able to fully perform her commercial activities without any limitations or delays. As an added benefit, the gyroscopic forces resulting from the spinning rotor sail reduce the ship’s rolling action significantly.

The rotor sail can be controlled manually or automatically in response to sensor readings. The crew can choose to utilize the extra thrust generated by the sail to reduce engine power and fuel consumption, or to increase the ship’s speed. For example, at Beaufort force 7, the crew found that the rotor sail boosted the cruising speed by 2 knots. The unit also passed its first storm test with flying colours: an inspection following exposure to wind speeds around Beaufort 9 revealed no damage. According to the applicable rules the system must be designed to be safe under all environmental and operational conditions the vessel may experience.

Seizing the opportunity of a scheduled port stay in Rotterdam, a technical team from the Emden/Leer University, Dirks Elektrotechnik and ECO FLETTNER performed one final, important optimization measure on the rotor sail: dynamic balancing to minimize vibration and bearing wear. By attaching balancing weights along the entire length of the rotor based on a proprietary method developed by design engineer Siegfried Lais of LAIS Design & Development, the rotor balance was improved by 50 per cent, expressed in vibration amplitudes, reports Oltmanns.

After a full six months of operation, enough operational data was available to draw some key conclusions regarding the effectiveness of the rotor sail. All performance data exceed the predictions made by the Emden/Leer University based on wind tunnel measurements and calculations by a wide margin: at Beaufort 4 to 5, the rotor sail is 20 per cent more effective than calculated; at Beaufort 7.5 to 8, its efficiency is as much as 40 per cent better than predicted. To make these comparisons the crew took measurements with the rotor sail switched on and off in identical sea and wind conditions. 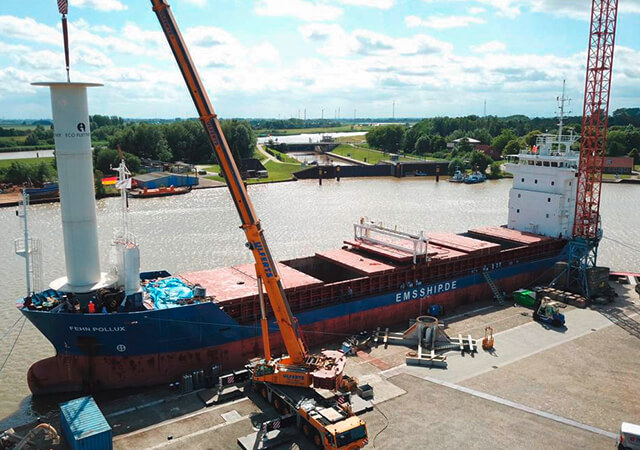 In early summer 2018 the MPV Fehn Pollux was equipped with a redesigned rotor sail, the ECO FLETTNER, and countless sensors were installed to test its efficiency. The trials have been more than satisfactory. (Photo: marigreen.eu/Berentzen/Ulferts)

The Emden/Leer University has developed a simplified formula to calculate the economic benefits of the ECO FLETTNER: in medium wind conditions the unit produces the equivalent of 2 kilowatts of propulsion power per square metre of projected area (H × D) on average per day in addition to the main engine output. The mean performance potential of the ECO FLETTNER rotor sail on Fehn Pollux in addition to the main engine power output as determined by the university is 100–150 kW on a yearly average. How high the achievable savings are depends greatly on where the ship is in operation.

Savings in the range of 10–20% can be expected, depending on the speed of the ship and main engine performance. The vessel’s rotor sail has a projected area of 54 square metres. Multiplied by 2 kilowatts, the ship saves an annual average of 108 kW at sea beyond its main engine output, equivalent to a 15 per cent saving in energy and emissions for the ship’s 650 kW main engine (Eco speed). This applies to medium wind conditions. In good wind conditions, such as on trade wind routes, the rotor sail produces 2.5 kilowatts per square metre of surface area, and in very good wind conditions the yield exceeds 3 kilowatts.

Based on this simple formula, shipowners can easily calculate the best size and number of rotor sails they would need to install to achieve a specific amount of energy savings, provided that enough space is available on board. In lower-wind areas a larger rotor size is advisable, and vice versa. Of course, the capital investment needs to be considered as well.

Rotor sails can be retrofitted on existing ships and have been accepted by IMO for EEDI calculation. They do not require any additional personnel on board. Installing the rotor sail on the forecastle has a positive influence on the manoeuvrability of the vessel and the power output of the rotor sail. “Many ships of the world’s merchant fleet could benefit from one or several rotor sails without limiting the use of other emission abatement technologies, provided that the rotor sail is sufficiently exposed to the elements,” says Hasso Hoffmeister, Senior Principal Engineer at DNV GL – Maritime. “Of course, this would not necessarily be the case on a highly stacked container ship. On routes with predominant headwind a rotor sail is of little use, and fast-sailing vessels will benefit less from a rotor sail than slow-steaming vessels because the airstream will counteract the Magnus effect to some extent.”

DNV GL’s class-independent Advisory Services can perform analyses and simulations to predict the effectiveness of different types of sails for specific vessels, trade routes and operating profiles and help operators determine the feasibility of such an investment.

The measurement performance data collected and published by the Emden/Leer University in the MariGreen project is highly transparent, providing a trustworthy basis for shipowners, investors and shipyards contemplating future application of the technology and intending to prepare ship-specific feasibility calculations. 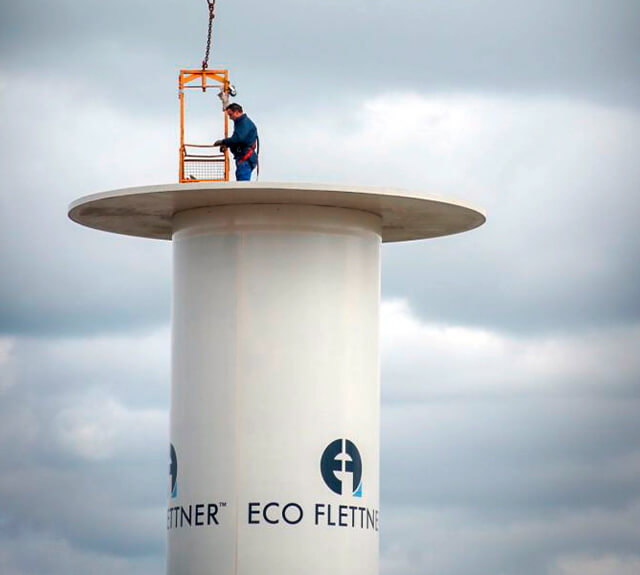 An engineer performs some final checks on top of the ECO FLETTNER rotor sail before being lifted off. Installation of the entire unit, including some hull reinforcement work, took as little as 20 days. (Photo: marigreen.eu/Berentzen)

“DNV GL has issued Design Guidelines for Certification and Classification Procedures of Flettner Rotors (Document MCADE0452-001) and can provide comprehensive technical advice on rotor sail projects,” says Hoffmeister. The ECO FLETTNER project team is currently discussing various certification options for their ECO FLETTNER rotor sail. “DNV GL offers Approval in Principle (AIP) or type approval, the latter either in the form of a Type Approval Design Certificate (TADC), which comprises a comprehensive review of drawings, or as a Type Approval Certificate (TAC), which includes a TADC plus prototype production monitoring and trials and will then apply to series production,” explains Hoffmeister. “Furthermore, we are preparing a new WAPS (Wind-Assisted Propulsion System) class notation, and a Certification of WAPS class programme.”

“I believe we can say today that this Flettner sail has reached market maturity,” says Oltmanns in view of the excellent performance record of the ECO FLETTNER. “The prototype we installed on the ship is essentially ready for production.” The project partners are now establishing a company to commercialize the product. Some initial enquiries from shipowners and yards have been received, and initial cost calculations are in progress. It is safe to say the rotor sail is ready to enter the mainstream of attractive emission abatement measures. 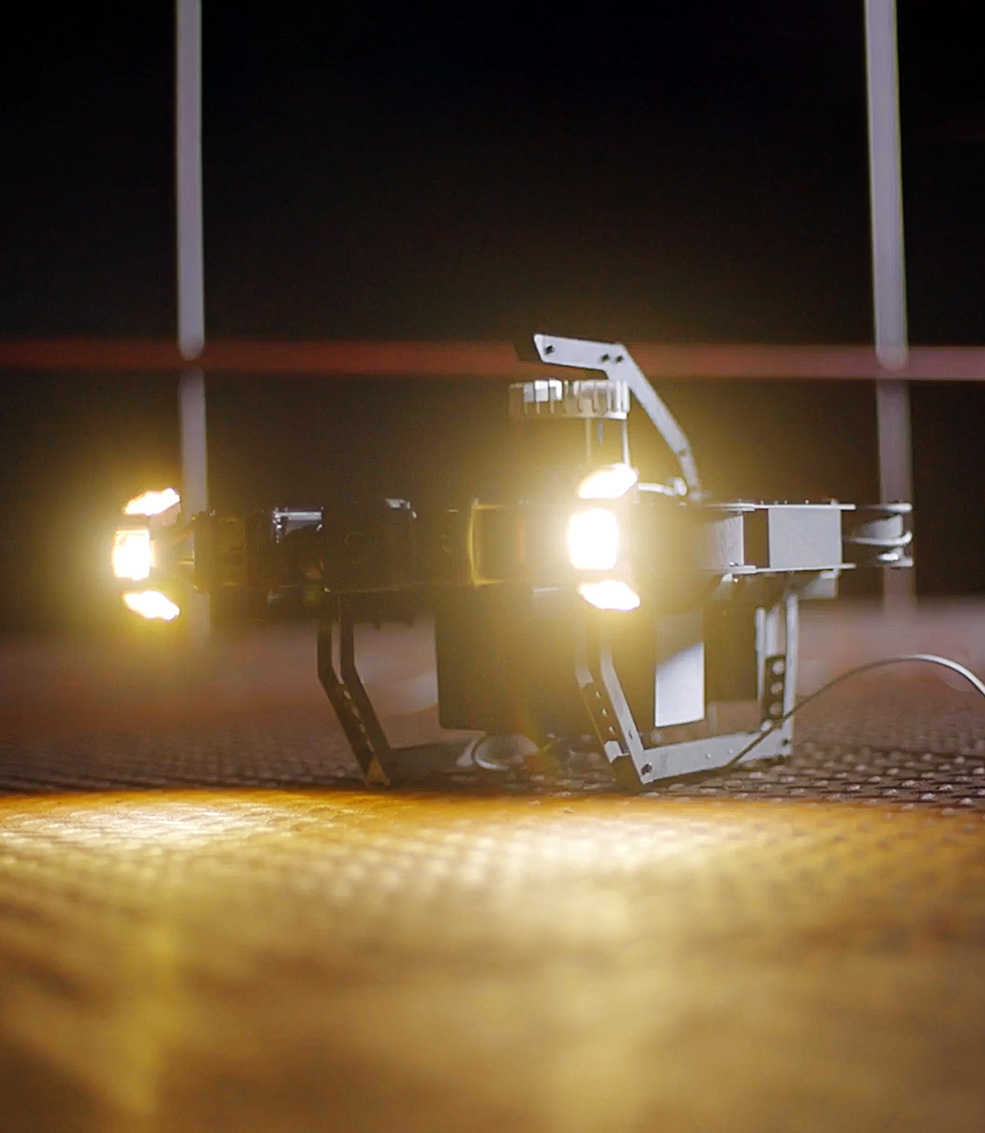 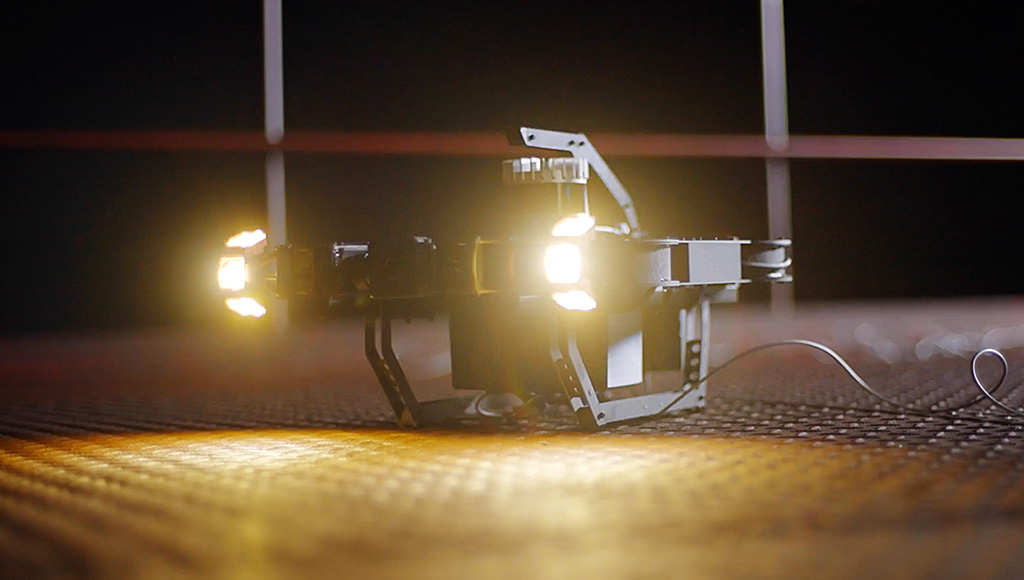 Easing the burden of renewal surveys on owners and operators is a top item on DNV GL’s agenda. The next step: Using custom-developed drones to perform visual inspections and steel thickness measurements delivers solid results and saves operators staging costs and port fees. 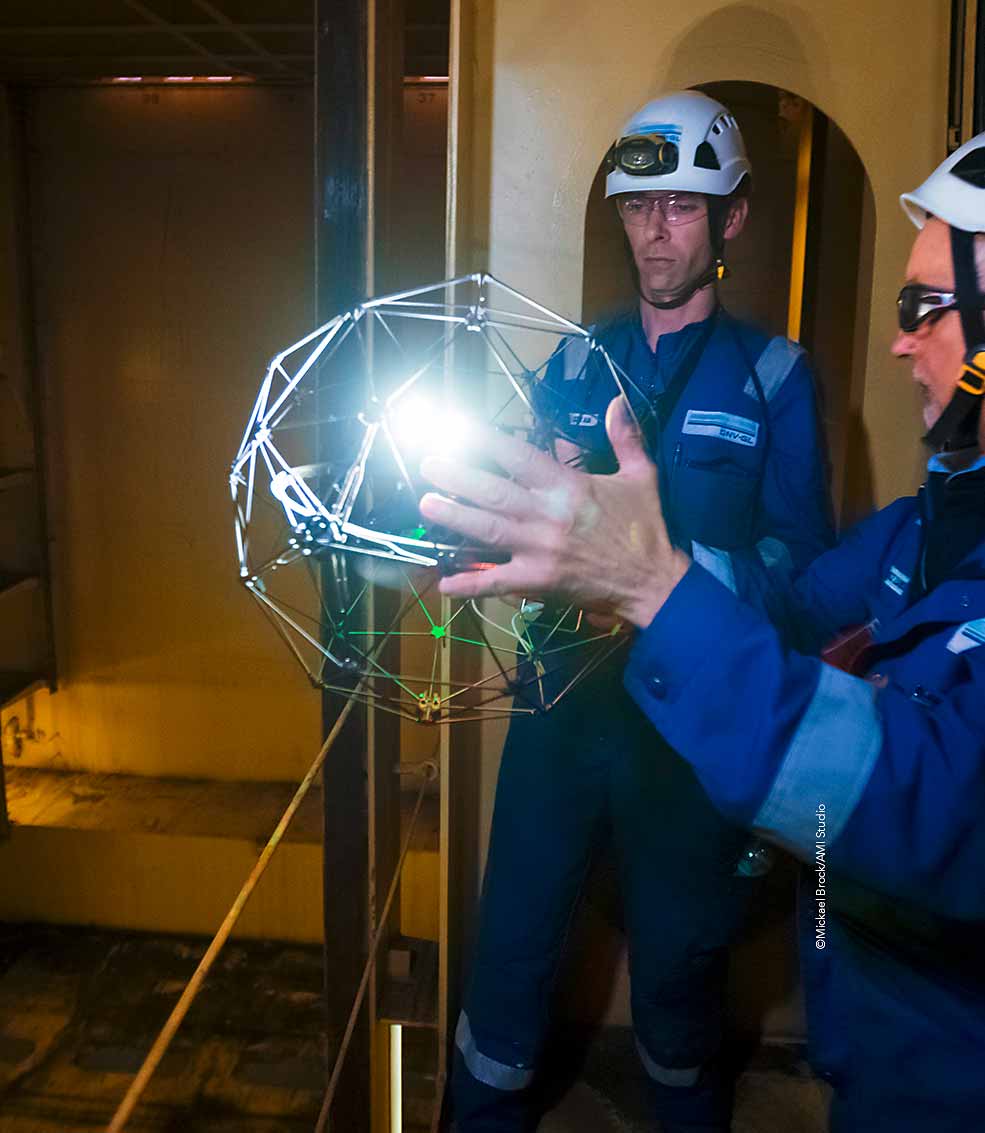 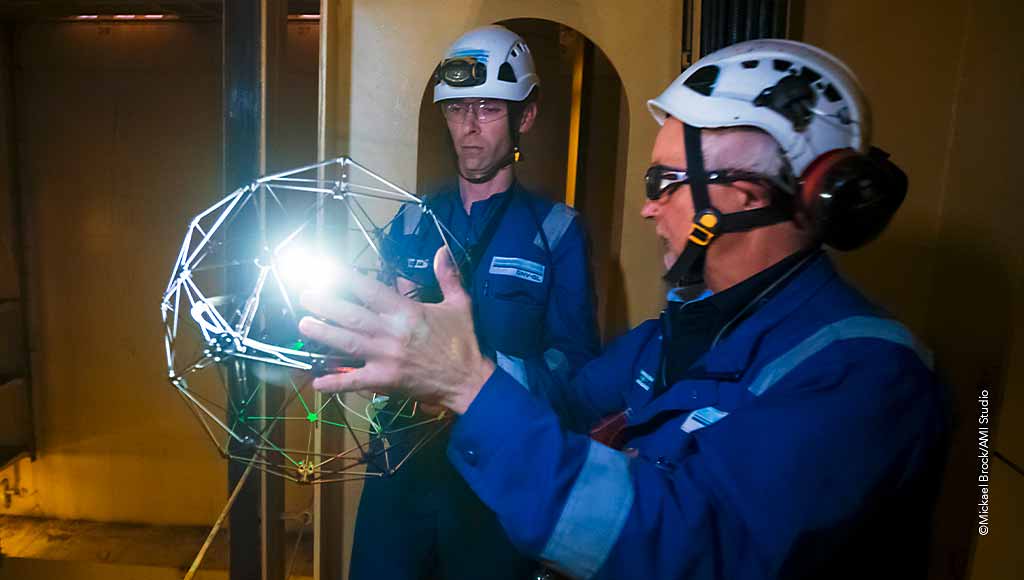 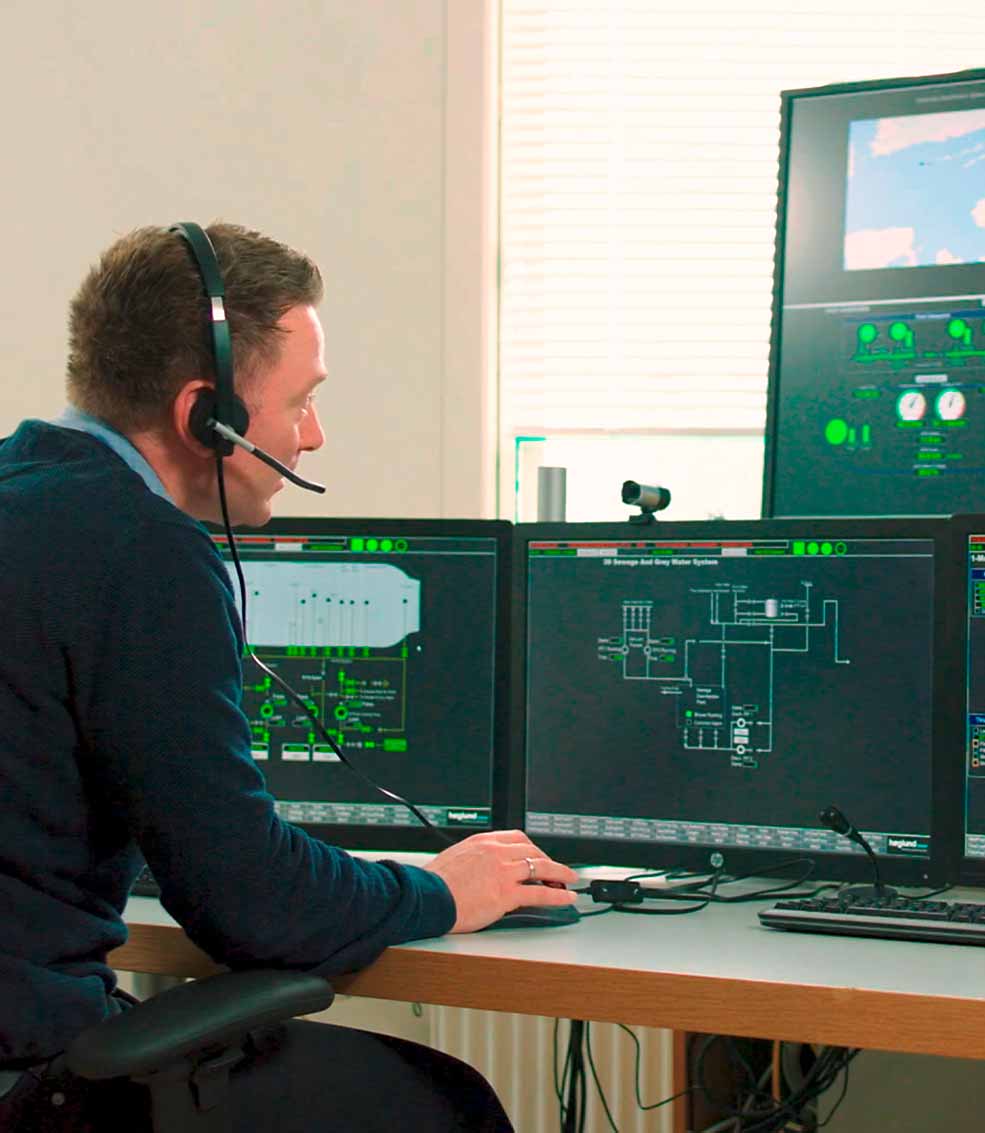 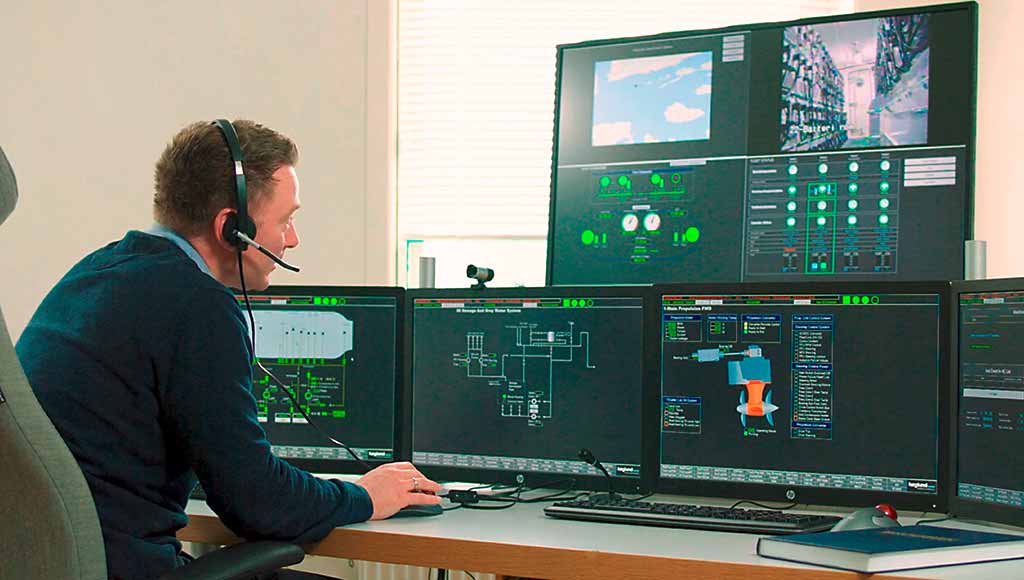 DNV GL has been using camera-equipped drones in surveys since 2016. The concept, the technique and the equipment were developed by the surveyor team in Gdansk in response to customer enquiries. Go on a drone survey with them. 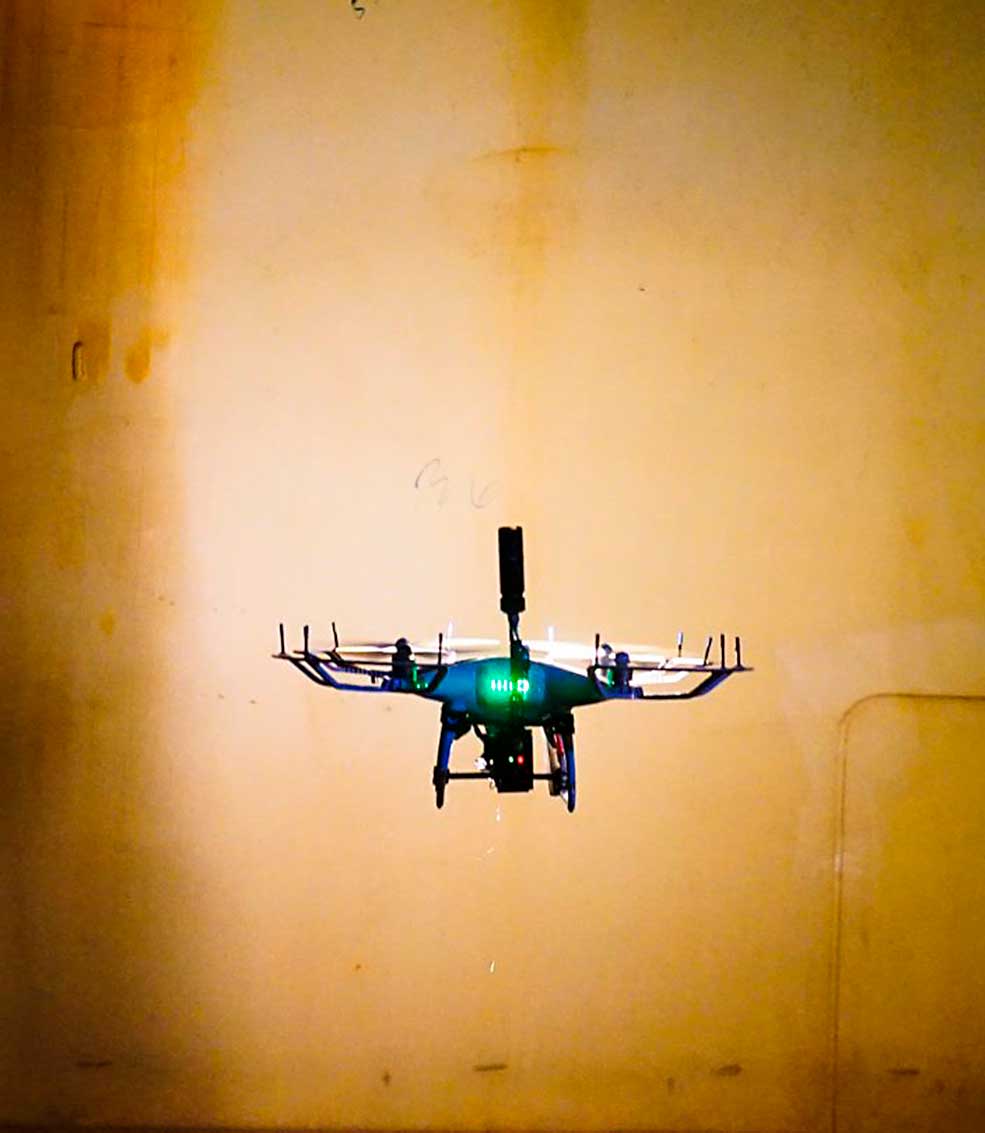 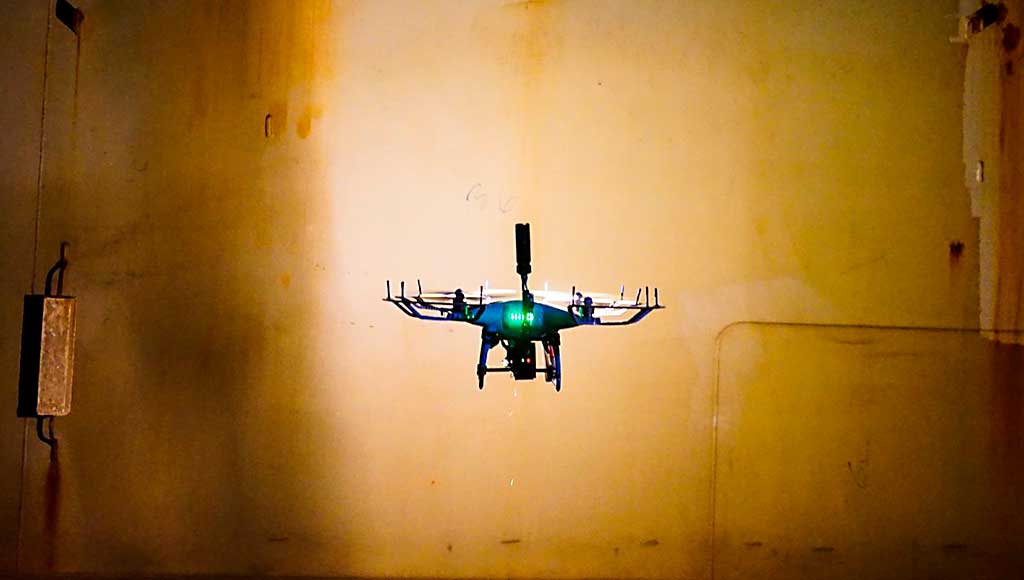