Power Hardware in the Loop

The future of electric testing

The electrical system is going through a transformation as more and more renewables are connected to the grid. As most of the renewables utilize power electronics to connect to the grid, we can expect new challenges in the integration of the distributed energy resources to the system.

The DNV GL Power Cybernetics initiative is a response to the foreseen challenges introduced by active control systems in the grid. Optimal performance from an active control system can only be guaranteed with a holistic testing approach that test not only the component but also its integration to the grid as a complete system.

The cyber-physical testbed offers a flexible, cost efficient alternative for a rigorous assessment of electrical devices and its active controllers. The Power Cybernetics research team has worked hard on realizing a state of the art PHiL testbench within the Flexible Power Grid Laboratory (FPGL) located in Arnhem, Netherlands.

The PHiL testbed consists of a real-time simulator and sixteen 4-quadrant digital power amplifiers with a power capability ranging from 30kVA to 100kW per amplifier (depending on the configuration) and a bandwidth ranging from DC to 5kHz. Suitable for wide bandwidth AC grid emulation or DC equipment simulation (PV emulator, battery emulator, etc.) 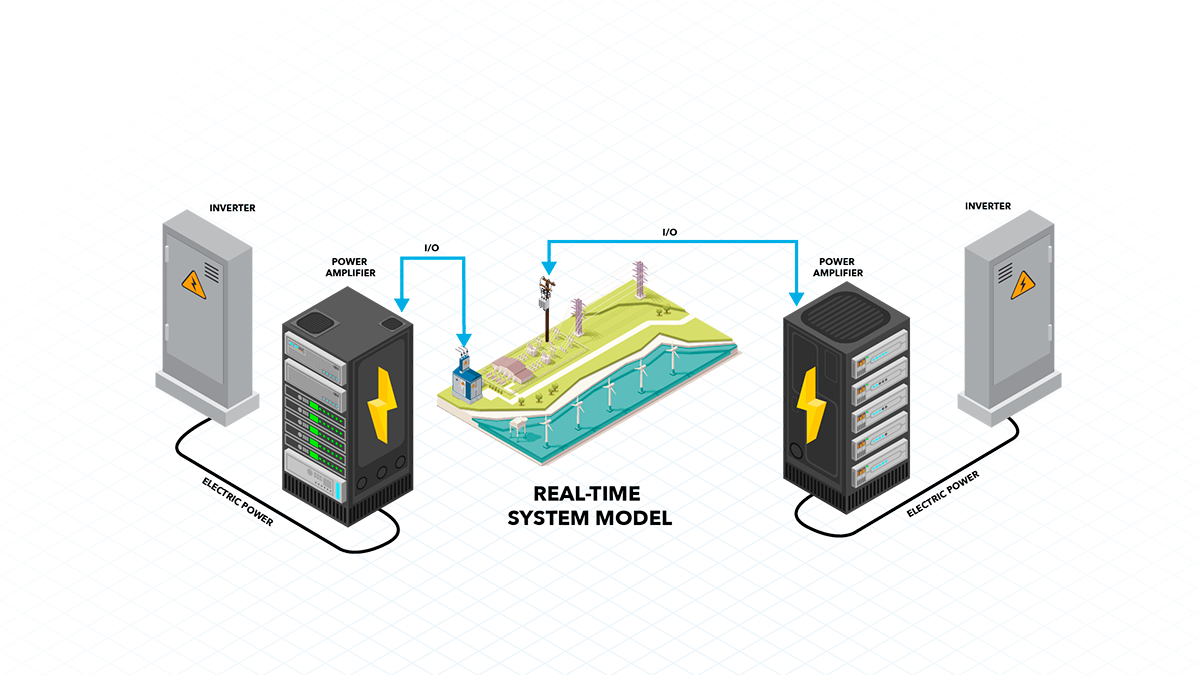 Power Hardware in the Loop Setup

The initial demonstrator focused on the validation of the electrical model of a microgrid concept proposed in the WIN WIN (WINd-powered Water INjection) Joint industry project.

The proposed microgrid is composed of three major subsystems, a wind turbine, a storage system and a water injection pump. All these subsystems are interfaced to the power system using advanced power electronics on a megawatt power scale, with no coupling transformer at the point of connection. Moreover, all the mentioned subsystems are placed in close proximity on the same offshore platform. This means that there is practically no electrical distance among the components that would otherwise provide natural damping between active control systems. This microgrid configuration therefore presents significant challenges for controllability and electrical stability that require an in-depth validation before moving into a real-life prototype.

A PHiL approach was used for the validation of this concept. It facilitated the testing and prototyping of such a complex microgrid with all its controllers, albeit on a kilowatt scale. This assessment helped DNVGL to determine if the proposed concept is actually electrically stable and controllable; as well as identify the engineering risks and key elements to consider in the development of the WIN WIN microgrid going forward.

The WIN WIN joint industry project is a collaboration with our partners ExxonMobil and ENI Norge.  The Norwegian Research Council has been a sponsor for this project.

DNV GL research is very active in the cyber-physical arena and aims to reframe the world of electrical testing by proposing a fitting alternative to the traditional approach of testing.

Browse our other digital-focused featured projects

PHiL: Power Hardware in the Loop

The future of electric testing

A digital solution to the costliest corrosion threat

Back to overview page