Insight from the launch panel

Gabrielle Walker is an expert strategist, speaker and facilitator, with a focus on energy and climate change. She works at boardroom level with a wide range of global companies, has written four books and presented many TV and radio programmes. She has a PhD from Cambridge University and has taught at both Cambridge and Princeton

Author and scientist, Dr Gabrielle Walker, moderated a panel of industry leaders at the launch, in London on 4th September 2017, of the first edition of DNV GL’s Energy Transition Outlook. The panel focused on the implications of DNV GL’s forecast both for the energy industry, and for energy-intensive industries. Here she captures some of the thrust and parry of the discussion.

At the beginning of this month I had the privilege – and the pleasure – of chairing a high-level panel in London at the launch of DNV GL’s first Energy Transition Outlook. We had a lively discussion in which experts from across the energy sector provided robust support--and some interesting challenges—both for the report and for the energy transition itself.

All the panelists recognized that the report is doing something different, and important. Lord Oxburgh, former chairman of Shell and energy spokesman in the House of Lords, opened by calling the report a “superb piece of work” adding that he found it both “provoking and honest”. Nina Skorupska, Chief Executive of the UK’s Renewable Energy Association, noted the benefits of having such a report come from DNV GL -- a company spanning so many different industries without having a vested voice in any one of them. John Knight, EVP of Global Strategy and Business Development at Statoil also called the work “very brave, interesting and novel”.

John Knight went on, though, to voice concern about the way the report gave a “likeliest case prediction” rather than a range of scenarios. Given the length of the transition and the uncertainty of the future beyond the next few years, he pointed out that predictions of the most likely case often turn out to be wrong. Because of this, he said, Statoil prefers to rely on a series of scenarios to help them develop flexible business models that could be useful for a range of outcomes. 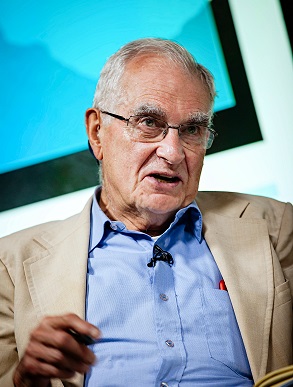 Image: Lord Oxburgh, former chairman of Shell and energy spokesman in the House of Lords

Forecasts and scenarios
I was very pleased that this issue came up right from the start as it’s one of my bugbears. Scenarios are very useful, but they are not predictions. They are ways of playing with the interactions between different factors to see what the implications might be. And yet people often treat them as if they are direct forecasts. Worse, when it comes to the energy transition there are dozens, hundreds of different scenarios, and it’s dangerously easy just to pick the one you like best.

That’s why I like the approach DNV GL has taken with this energy transition outlook. Sometimes you need to stick your neck out, make a forecast, and be as honest as possible about the assumptions you’re making. And that, to me, is what this report does. I had some support in this from other panelists. Pauline Walsh, Director of Gas Transmission Asset Management at National Grid, said “Scenarios are useful for stretching our boundaries and seeing what could be possible, but at some point it is important to make a forecast and to say that based on what we know today, this is the likeliest outcome.”

Nina Skorupska went further. “Having a forecast is being bold,” she said. “It’s about saying that’s what we’re going to go for. Unless you have that ambition nothing really changes.”

Technology
And in spite of the difficulty in forecasting reliably into the future, there are some predictions that already seem reliable. For ElisabethTørstad, CEO of Oil & Gas at DNV GL, the most striking of these is the decoupling between GDP, population growth, energy demand and emissions. “Fifteen years ago we wouldn't have thought it could go that way, it would have seemed like wishful thinking. But we already see that decoupling happening now. I think that’s a very promising development.”

She also defended many of the other technological and economic predictions of the report. “We are a technology savvy company,” she said “and we’re also technology optimists. We see in storage, in renewables and also in oil and gas continuing technical developments enabling us to drive the costs down. We’ve seen that happening throughout the energy industry in the past years and we see it continuing.”

There were two particular technologies that Ron Oxburgh would have liked to see more about in the report: nuclear power and carbon capture and sequestration (CCS). “There are some brave assumptions that go behind the [report’s] predictions,” he said. “If those assumptions don’t work out, what is our insurance? I believe that CCS and nuclear are part of that insurance.”

Again, I was very pleased that this topic came up, and this time I would agree with Ron. Perhaps not on nuclear power. Although I support nuclear power as a low-carbon solution, it has suffered grievously from political/public perception challenges, especially in recent years. Elisabeth Tørstad also pointed out that one of the reasons that nuclear is not prominent in the report is that its cost development looks much less promising than other technologies. But I do think CCS will have to be an important part of our future if we are to have any chance of reaching our climate goals. John Knight agreed, noting that DNV GL sees energy efficiency playing a heroic role in the transition, and less efficiency would require more mitigation. “It’s difficult to see us getting to 2 degrees without much greater deployment of CCS,” he said.

As for other technologies, perhaps not surprisingly given her role, Nina Skorupska was enthusiastic about the report’s optimism on the uptake of renewables, and role for increased energy efficiency. She pointed out that in 2011 many people thought that the reduction in UK subsidies for solar power would spell the death knell of the industry, but –thanks to spectacular drops in prices – the UK is now seeing solar projects being deployed without any subsidy. Meanwhile Pauline Walsh talked about the potential of natural gas not just in its familiar role for providing electricity and heat as a backup for renewables, but also less conventionally as a lower-emissions solution for transport. “We’re not saying gas will be there forever,” she said. “But we are saying gas is an enabler to get to that future, to help us accommodate the fluctuating energy from renewables.” 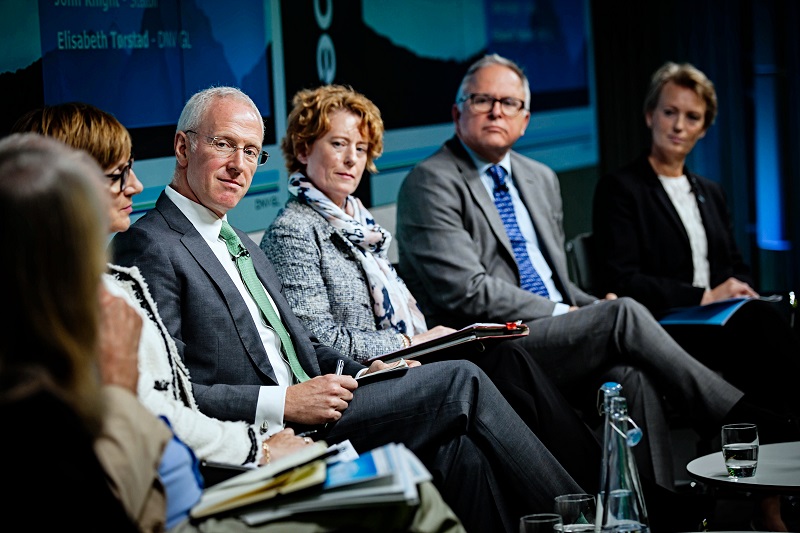 New business models
The panel raised two final topics, both of which are very close to my heart. First, John Knight pointed out that in addition to new technologies we will also need to design new business models. For example large companies like Statoil could deploy their balance sheets to mitigate risks in new projects/territories. This is a hugely important aspect of the innovation that we need, and will also require the finance sector to play its part. Simon Davies, Senior Vice President at Bank of Tokyo Mitsubishi, said that in this regard bankers are notoriously slow to change, particularly regarding large risk decisions.  “Risk aversion is the career limiting factor”. He does not believe that banks will lead the way, but added “as new models develop and as bankers become familiar with them, banks will follow our clients.”

And the final point? Everyone agreed that the energy transition will require new conversations and new kinds of collaborations. Nina Skorupska said “As the energy industry we have to stop just talking to ourselves, we need the conversations with other sectors to improve and accelerate.” John Knight talked about how much he had enjoyed reaching out to talk to NGOs and other people across the traditional polarizing divide. “I tried to have a practical debate rather than a moral debate about what’s likely and what’s necessary. That’s why I enjoy working on panels like this and talking to all stakeholders. We’ve got to have the right conversations.”

Elisabeth Tørstad agreed. She focused on the importance of breaking down silos within the energy industry. “I think we today we have too much focus on the competitive elements between the individual actors and too little focus on the elements where we can improve together." 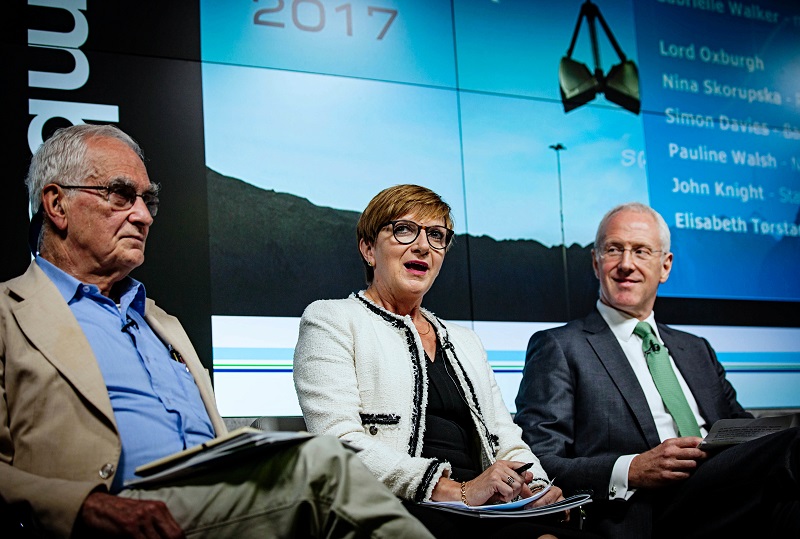 Survival
And finally, much will come down to money. Ron Oxburgh said “The energy transition is going to depend on sensitive interactions between governments and markets. Left to their own devices, markets will simply go for the most readily financeable solution; that may or may not be what the world needs in the longer term.”

Simon Davies talked of the role that banks will need to play in helping governments and regulators understand how finance thinks, so that they will policies and regulations that allow the finance world to play a positive role instead of representing a brake. And in the end, he was the one who sounded perhaps the most profound note of the day. For him, we have the best possible reason to get this right. “It is not a matter of ‘can we play around making a dollar here and a dollar there?’,” he said. “Ultimately, it’s a matter of human survival.”

Impressions from panelists and customers at the launch