Yes, but it depends how you count energy

Director of the Energy Transition research programme in DNV GL and Project Director for DNV GL’s Energy Transition Outlook. He has a Master’s degree from NTNU in Norway and 20 years’ experience working in DNV GL, mainly within the Maritime and Energy sector.

In this feature, DNV GL’s Energy Transition Outlook researchers explain the alternative methods that exist for counting primary energy (i.e. the energy extracted or captured before any transformation into usable energy by the global population) and how these various methods lead to differing forecasts of peak energy.

In our Energy Transition Outlook 2017 report, we forecast that the world’s primary energy supply will peak before 2030. At that inflection point, the global economy will grow while using progressively less energy to do so. Thus, the energy transition is not only about peak oil etc., but about the world’s peak energy in toto.

Such a powerful prediction is not made lightly. DNV GL is a science-based organization, not given to wishful thinking. Our model-based forecast is made in collaboration with more than 100 energy experts, and one that we characterize as the ‘most likely’ energy future for our planet through to 2050. But this conclusion depends on our choice of counting method or, more precisely, which primary energy counting method we use. As we explain in this short article, if a different method to ‘count’ primary energy is used, then world peak energy may not appear to be as proximate as 2030.

What is primary energy?

Energy systems modelling expert on the DNV GL Energy Transition team. She has worked in project finance at EDF Renewable Energy and led scouting activities for the Bosch Research Center in Singapore. She holds a MSc in Technology and Policy from the Massachusetts Institute of Technology (MIT).

‘Primary energy’* is simply energy as it is extracted or captured, before it can be converted into heat or mechanical work. Primary energy includes ‘molecules’ of energy – i.e. the chemical energy in the coal entering a power station on a conveyor belt, or the crude oil extracted from a well. It may also encompass electrons – e.g. the electricity generated from a solar panel or a wind turbine.

By measuring energy at the point before combustion, we can address the inhomogeneity associated with different energy sources (such as solar, wind, nuclear and fossil fuels). For example, if we just measured the world’s final energy demand, then heat losses during electricity generation would not be included.

How do you calculate primary energy?

There are several methods for calculating primary energy and each one produces a different energy mix. This is because each method designates a distinct efficiency for each energy source.

Analysts might agree, for example, that hydropower contributes 17% to the world’s electricity mix. But one primary energy method may assume the average conversion efficiency of hydropower is 100% and another method may assume it is 38%. As a result, the method with the lower efficiency factor requires much more primary energy to produce the same amount of electricity.

These differences are most pronounced when it comes to measuring the primary energy of non-combustibles (i.e. renewables, excluding biomass). While the primary energy of combustible sources such as fossil fuels and biomass is commonly defined as the heating value of combustion (or enthalpy), there is debate about how primary energy for non-combustible sources like nuclear or renewables should be calculated. Here, there tends to be a polarization of views: either renewables are regarded as 100% efficient (because the input energy, e.g. solar, is neither captured nor extracted as such and is assumed to be outside the boundary of the energy system), or they are assigned a low conversion efficiency (because, for example, solar panels only convert a small percentage of the solar energy shining upon them).

These differences are apparent in the three key primary energy methods:

There is another method, called the ‘resource content method’ that defines primary energy of renewables as the energy content of solar radiation, gravitational potential energy of hydro or the energy in wind. As such, it uses an efficiency factor of around 20% for solar PV and 40% for wind, being the efficiency with which panels converts sun to electricity and wind turbines converts wind to electricity. If this method is used, the efficiency factor of renewables will improve over time owing to technological improvements (unlike other methods which are only concerned with their electricity output). The theory behind this method is more convincing than the substitution method, but it is not used by any of the larger forecasters.

As we can see from the table below, the efficiencies for coal, oil, biomass and gas are the same across all three methods. When we move into nuclear and renewables then discrepancies arise. This is particularly notable for the direct equivalent and substitution methods where efficiencies of 100% and 38% are given respectively across the board for hydro, nuclear, solar, wind and geothermal sources. 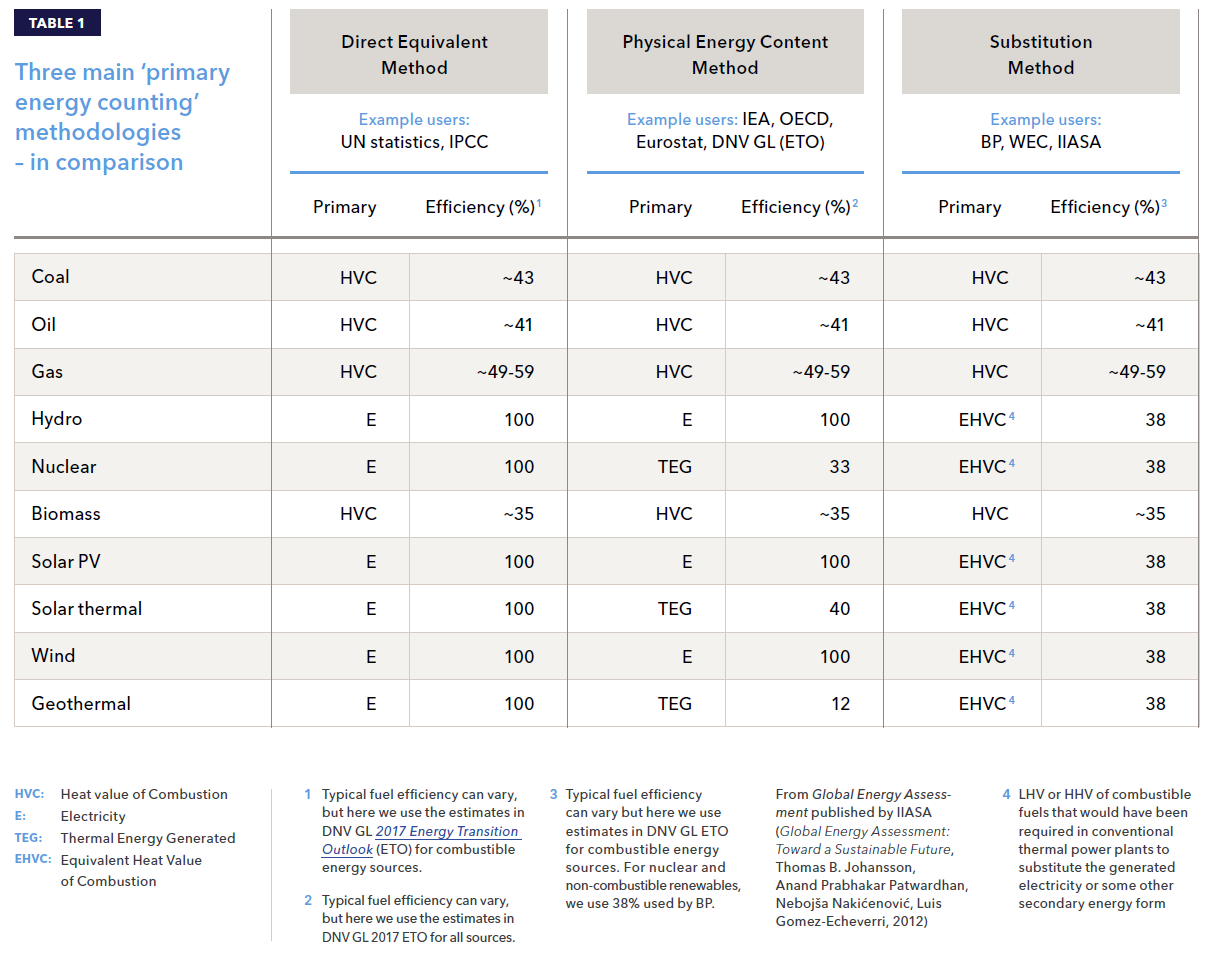 Which method did we use for our forecast?

We used the ‘physical energy content method’ in our Energy Transition Outlook. Why? Because this approach is in line with organizations such as OECD, IEA and Eurostat and thus allows for easy comparison with other reference forecasts. Also, the conversion of individual categories (oil, gas, wind, PV etc.) is directly comparable to the ‘tradable energy’ metric that is familiar to both oil and gas, and power producers. Put simply, a tonne of crude oil is tradeable; half a day of sunshine is not – but half a day’s electricity generation from a PV panel is, of course, tradeable.

This is a crucial point. Our projection is not intended as an intellectual exercise. As the tradable energy metric is both measurable and has a clear economic value as the coal, oil, gas and power they produce and sell, then it is easier for our customers to use in order to make informed daily investment and business decisions. 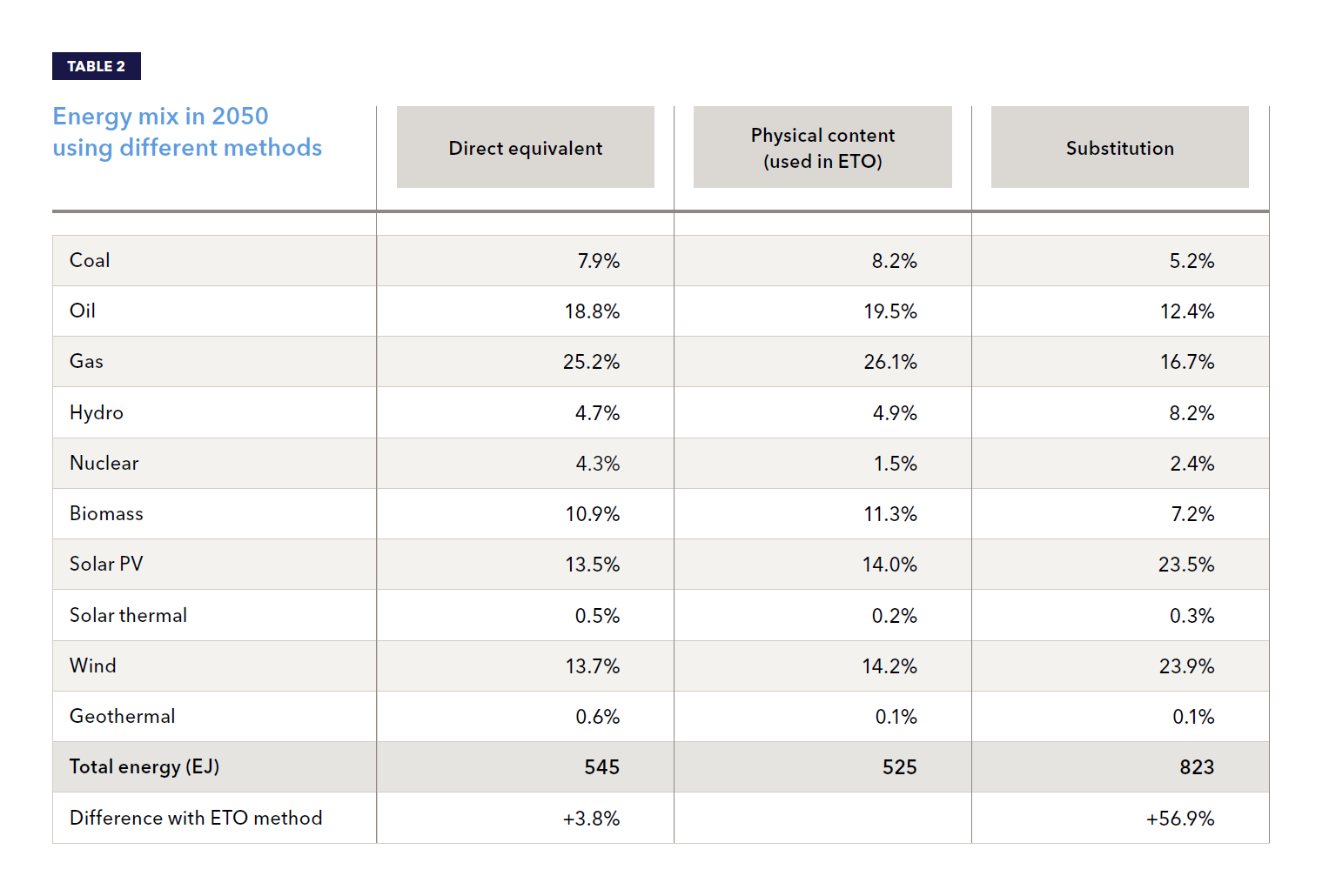 How would our forecast differ if we used an alternative method?

We are likely to continue using the physical content method for the foreseeable future. First, for our customers and most stakeholders, this equals the captured, tradeable energy they deal with every day.

Using one primary energy method over another significantly impacts energy forecasts. When the renewable share of the energy mix was low, this hardly mattered. As renewable share is now growing rapidly, and will continue to do so, different methods give different results, and it is important to understand the differences.

Table 2 below clearly shows differences in the projections, depending on the method used.

As can be seen from the table, if we had used the direct equivalent method, the global primary energy supply in 2050 would only be 3.8% higher compared to the primary energy supply in physical content energy method. Nuclear would also appear to play a more modest role (only 1.5% of the total primary energy mix versus 4.3%). A similar difference is found for solar thermal and geothermal, which would appear to have a smaller share of the energy mix using the direct equivalent method.

The differences between the substitution and physical energy content methods are very pronounced. In the past, when renewable energy constituted only a small part of the world’s energy mix, the differences were easily hidden under the large fossil share, but as the renewable energy share continues to grow, the differences are increasingly apparent. This widening interpretative gap is likely to lead to a comparison of the two methods surfacing many times in the coming years.

Using the substitution method or using the alternative resource content method where the actual conversion factors are used at any time, global primary energy supply would not peak in our forecast period (up to 2050). In fact, the substitution method would imply a 57% higher primary energy supply in 2050 than we predict using the physical content method. 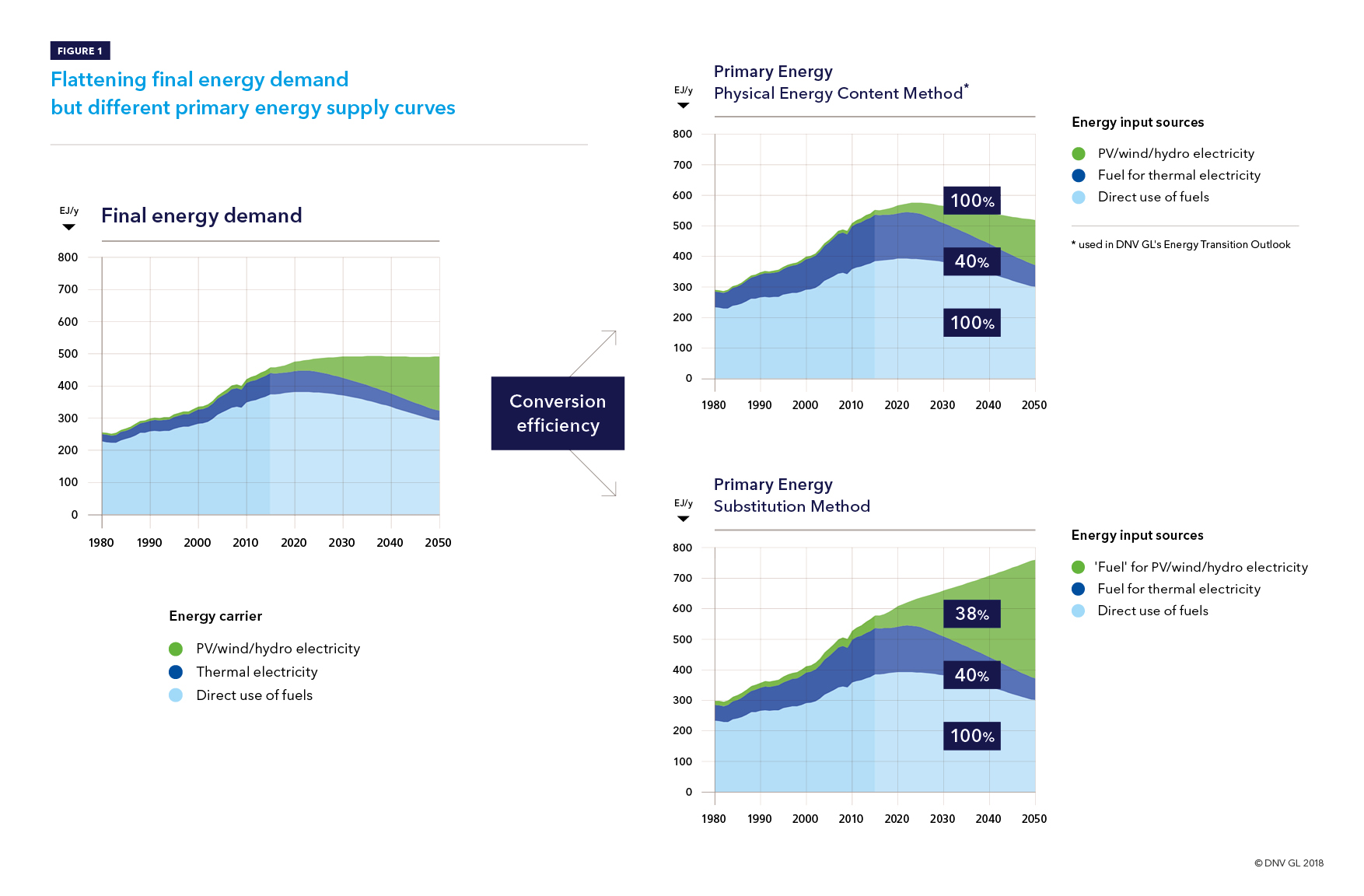 Our prediction of peak energy before 2030 is in line with our forecast that the world will spend less on energy, as we explain in detail in our main energy transition outlook report.

DNV GL will include more comparisons of our results using alternative primary energy methodologies in our 2018 edition of the Energy Transition Outlook (due for release in September). This will provide our customers with a ‘Rosetta Stone’ to translate different energy forecasts and navigate their way through the global energy transition in the years ahead.

In the absence of a de facto international standard, we are likely to continue using the physical content method. First, for our customers and most stakeholders, this equals the captured, tradable energy they deal with every day. Secondly, it enables direct comparison with other main forecasts, notably IEA’s. And thirdly, the alternative substitution method seems arbitrary in its conversion factors, and the fourth method, resource content (using actual conversion efficiency of solar and wind) is not used by major forecasters.

Our prediction of peak energy before 2030 is in line with our forecast that the world will spend less on energy, as we explain in detail in our main Energy Transition Outlook report. The alternative view leads to a forecast energy future without a peak before 2050; a future in which the world will need evermore energy, supplied by the influx of wind and PV sources.

In reality, neither primary energy counting method changes what is actually happening on the ground or in it – e.g. the rate of spread of hydraulic fracturing or the number of PV panels being installed. And, neither counting method has any bearing on the rate of decarbonization required to meet the Paris Agreement.

While we advocate one accepted standard – preferably the physical content method – we reiterate that there is no one ‘correct’ way of counting energy.

* “Primary energy should be used to designate those sources that only involve extraction or capture, with or without separation from contiguous material, cleaning or grading, before the energy embodied in that source can be converted into heat or mechanical work.” UN, Concepts and Methods in Energy Statistics, New York, 1982 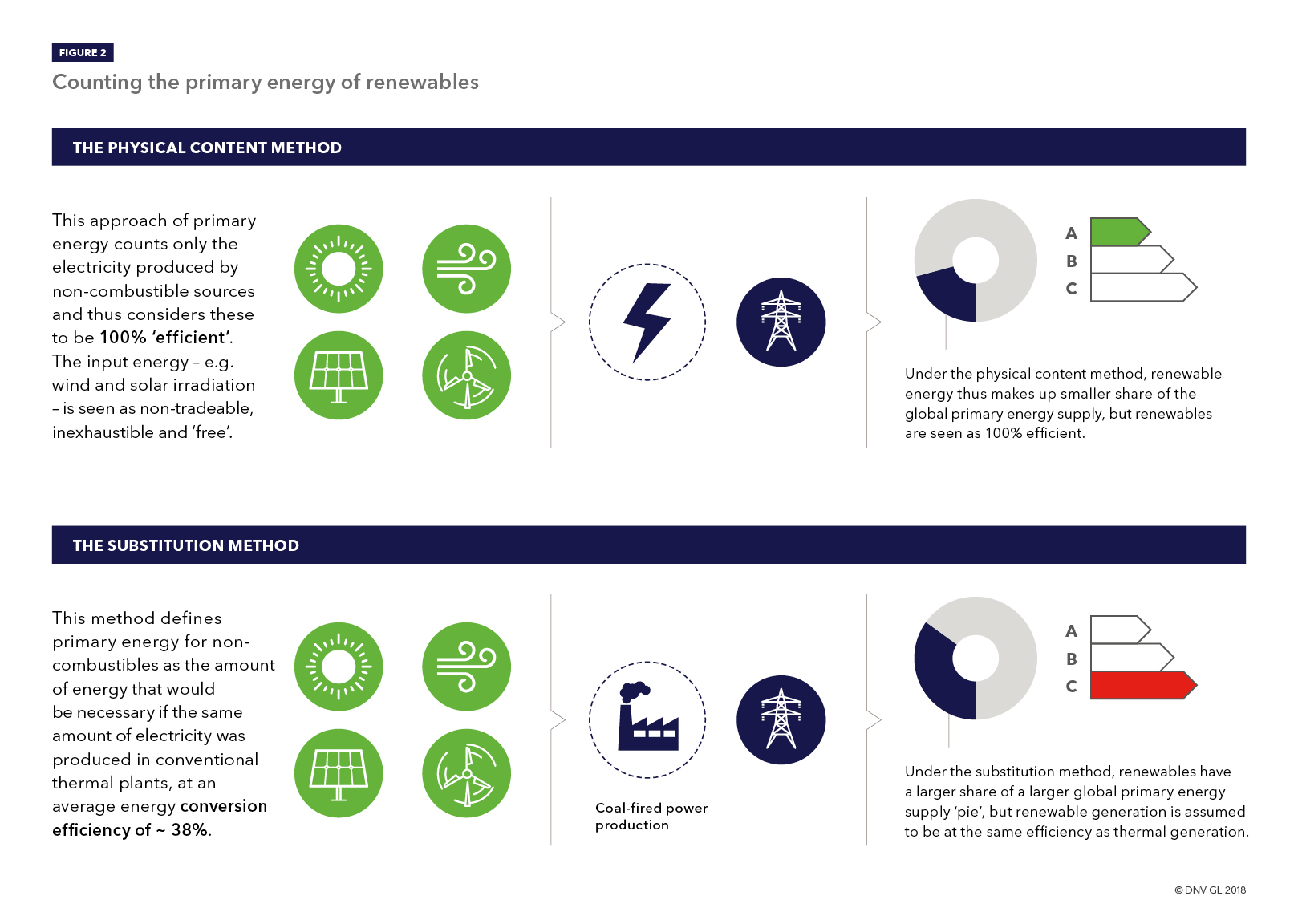